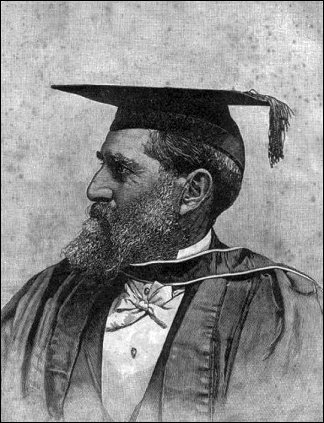 One of the fascinating characters early in the history of the Moorabbin district was Joseph Ostler. He was born in 1827 but his place of birth is uncertain. It may have been at Walsoken in Norfolk, England but it was in Halifax, Yorkshire that he married Susan Burgess Mackerill on January 22, 1852 when he was 24 years old. His occupation at that time was listed as grocer. Later that year he sailed on the Henry Gillespie with his wife to the Port Phillip District where he took up the occupation of butcher at East Brighton.

At the time of the formation of the Moorabbin Roads Board in 1862 he was a landowner and resident in Jasper Road, East Brighton. He was present at the initial meeting in the district, chaired by Colonel Mair, and acted as a scrutineer at the following meeting when members of the Board were elected. [1] He had signed the petition from local people to the government requesting that the Parish of Moorabbin not be included in a Roads Board District which also included the parishes of Mordialloc and Dandenong.

When the Moorabbin Board called for tenders for the position of District Secretary, Joseph Ostler was one of ten applicants. The others were James Barr, Benjamin Taylor, R Bust, Thomas Bent, W Woodby, Dempsey, John Miller, W Hutchinson and D Prophet. Ostler’s tender of forty pounds per annum was successful. Barr and Taylor offered to carry out the tasks of District Secretary for the same amount of money as Ostler but what swayed the Board to appoint Ostler is not known. The tenders from Bust, Bent and Woodly were for fifty pounds per year; Dempsey, Miller and Hutchinson were each prepared to undertake the role for sixty pounds, while Prophet offered the highest tender price of one hundred pounds. [2]

At the same meeting that Joseph Ostler was appointed District Secretary he was unsuccessful in his joint bid with Thomas Bent to undertake the task of valuing the rateable properties in the district. The Ostler-Bent tender of £38 was much too high as there were five offers from individuals willing to do it more cheaply. It was the £24 tender of Clayton and Jamieson that was accepted by the Board. [3]

Joseph Ostler was more successful at a meeting, which included representatives from Brighton and Caulfield, held on December 16, 1865, when he was appointed Toll Manager at a salary of £15. [4] This job was in addition to his role as District Treasurer and Secretary. Nine months later he was re-appointed to the dual role of Secretary and Treasurer at £45 per year plus accommodation. [5]

In 1867 two candidates, Thomas Bent and John Macarthy, fiercely competed against each other for the position of Chairman of the Board. Bent won in a rowdy meeting on the second vote but the animosity between the two individuals did not dissipate for several months. Macarthy and his supporters on the Board resolved not to attend meetings chaired by Bent and maintained this position until February 19, 1868 when they relented allowing for meetings to recommence with the necessary quorum. A letter was sent to the District Secretary, Joseph Ostler, informing him of the resumption of meetings but on that day he failed to present himself. [6] At the time he was living in Cochrane Street, Brighton.

For the District Clerk to absent himself without notice or approval of the Board was an unforgivable offence. Consequently, Attenborough and Bent moved at the meeting that Messrs Crisp and Lewis, the solicitors to the Council, be engaged immediately to investigate the absence of the District Clerk and report back to the Board at its next meeting. [7] On that occasion, February 27, 1868, the chairman reported that as far as he could tell Ostler had misappropriated £635-3-10 of the Board’s money. In addition, the bank was refusing to honour the Board’s cheques until it received some indication of the steps to be taken to reduce the Board’s overdraft. [8]

At the meeting Thomas Attenborough moved with the support of Samuel Munday that Ostler be dismissed from his office of Clerk and Treasurer to the Board and indicated that such dismissal did not preclude legal action against him in the future to recover stolen money. The Board sought approval from the Attorney General to offer a reward of £50 for the apprehension of Joseph Ostler and the police issued a warrant for his arrest, charging him with embezzling money from the Moorabbin Roads Board. [9] But by this time Joseph Ostler was probably not concerned about his dismissal, nor the warrant for his arrest, because he was well away from Melbourne sailing to another country with money equivalent to fourteen years’ salary.[10] Police later established that Joseph had left Melbourne by a Panama mail steamer in January but were uncertain whether his destination was England or America. [11]

An article in the Age indicates that, in addition to the money taken from the Board, Ostler also obtained considerable sums of money from friends and acquaintances on various pretexts before leaving behind his second wife, Mary Ann Stone, their three children, plus two children from his first marriage. All the children were under the age of nine years. [12] Subsequent Board investigations showed that the road toll money (rent) for February paid by Maloney to Ostler was missing, the financial records of the Board were in disarray, and moneys to reduce the overdraft had not been paid since 1865.[13] Following the exposure of these misdemeanours, Mr Jamison, the auditor for the Board, resigned in July and John Keys was appointed as the new district clerk. [14]

After Joseph Ostler’s flight from Melbourne on the mail steamer and arrival in the United States of America, he was robbed and lost all of his cache of money. [15] Yet sixteen years later he was able to return what he had stolen plus a little extra. How was he able to rectify the financial circumstances he initially found himself in? What is known is he wrote several books, which were published in America and Britain, and married for the third time in New Orleans, Louisiana, USA. [16] In one of these books the frontispiece has an etching of Ostler in academic gown, hood and mortarboard, with the notation that he was a Fellow of the Society of Science, Letters and Arts, London, but the name of the author is given as C Frusher Howard, a name he adopted sometime after leaving Australia.[17] Frusher was the maiden name of his mother. The portrait shows a man with a full beard and a strong nose looking sternly to the left. This is the man the police described in 1868 as having a fair complexion, brown sandy whiskers and moustache, shaved chin, sharp piercing blue eyes, bushy eyebrows, a smart gentlemanly appearance and a man who usually dressed well. [18]

C Frusher Howard is credited as the author of at least four books about arithmetic calculations, the first of which was published in San Francisco in 1874. This book was titled Howard’s California Calculator, The Newest, Quickest and Most Complete Instructor for All Who Desire to be ‘Quick at Figures’. The other books had similarly long titles and also concerned themselves with calculating, reckoning, and computing; including how to divide and multiply fractions, change fractions to decimals, convert imperial measures to metric measures, find discounts and compute interest payments. The third published book, Howard’s Art of Reckoning: The Standard Textbook & Referee of Shorthand Commercial Arithmetic, was published in London in 1896 with reprints in 1900, and was mentioned on his death certificate. This book is a significant work containing over 196 pages and includes endorsements from newspapers, journals, college principals and knights of the realm. Ostler also warned ‘book pirates’ of severe consequences should they steal his work. [19]

Three years after Ostler absconded with Board funds the Moorabbin Shire was created. After the passage of another twelve years, at a meeting of the Shire Council in 1883, Cr Ward reported to his fellow councillors that he had received £200 from their former secretary and requested that a receipt be forwarded to Ostler signed by the President. [20] Five months later Cr Ward again indicated he had received a money draft from Ostler and had paid it into the Bank of Australasia. On this occasion the amount was £447-14-10, the balance of the claim the Council had against him. [21] At that meeting the long-standing efforts to recover the stolen moneys was concluded. William Ward, married to an elder sister of Joseph Ostler, commented that he always had confidence his brother-in-law would repay the money and was pleased his confidence had not been misplaced. [22]

Sometime after 1887 Joseph Ostler returned to Victoria to live, possibly in North Melbourne. There was a Joseph Ostler living in North Melbourne in 1892 but his name does not appear in subsequent directories. [23] Perhaps he moved to live with his second wife, Mary Ann, or his son William, both of whom were living in the Brighton area. But by 1905 he was a resident in Mills Street, Brighton North because that was the address given on his death certificate. [24]

Joseph Ostler, at seventy seven years of age, died in the Melbourne Hospital on August 20, 1905 from chronic nephritis – a disease of the kidneys – and bronchial pneumonia. He was buried two days later, in the Baptist section of the Brighton Cemetery, in a grave, which already contained the bodies of his first wife, three of his children, and one grandchild. Thus ended the story of a remarkable career involving theft, fraud, travel, scholarship, and authorship.[25]