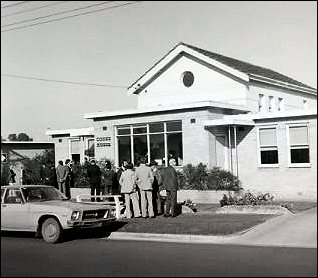 A Gathering outside the Cheltenham Court House, 1979. From Leader Collection.

Two cases were brought before the bench of the Cheltenham Police Court where three men were charged with gambling offences engaged in on December 23, 1935 on unfenced land in Balcombe Road, Beaumaris. Mr E O’Grady, the police magistrate and Cr C George, justice of the peace heard the charges against Thoma Brown, of 12 Murchison Street, Carlton, Clive Arnold of 67 Queensberry Street, Carlton and Robert Conbrough of 78 Condell Street, Fitzroy.

Senior Constable Thorburn of the gaming police brought the charge against Brown and Arnold. He charged Brown with betting in connection with coursing in which a mechanically controlled quarry was used. Arnold was charged with aiding Brown. Both men pleaded guilty.

Constable Whitford told the court that on Sunday 23, December he went to the place in Balcombe Road where coursing was in progress, and saw between 60 and 70 persons present. Six greyhounds each with separate colours attached to their collars, were in separate compartments of a large box. A mechanical appliance consisting of a motor cycle wheel set on a stand, a fishing line being wound around the rim of the wheel, was exhibited. Constable Whitford explained to the court that a stuffed rabbit skin was fastened to the end of the line and when the dogs were released, the skin was pulled along the ground in front of them by a man working the wheel by means of a crank.

Constable Whitford described how Brown took the bets which Arnold recorded in a book. Brown was calling out 2 to 1 the field. A man gave him two shillings, for which he gave him a yellow slip, and Arnold entered it in his book. The track was about 200 yards long. The race started at 4 p.m. the yellow dog winning. Brown said, “I’ll pay the yellow,” and Whitford saw several men being paid. Another race was held at 4.30. In the meanwhile he saw Constable Marchant give Brown two shillings on the black. Someone yelled out, “Coppers” when Marchant said, “I want to interview you two men,: and he took the book and tickets.

Brown, admitting to fines on similar charges, was fined £50 or three months imprisonment if in default. Arnold who also had previous convictions for similar offences, was fined £25 and if in default two months imprisonment. Further charges for a similar offences on December 16 were withdrawn. The machine used in the coursing was ordered to be confiscated.

In the second case, Robert Conbrough was charged with having an instrument of gaming and playing a game of chance known as ‘sweat’. Constable Hoare described the situation when he arrived at Balcombe Road where coursing was in progress. “About 30 yards off the road Conbrough was sitting on his haunches, in front of him being the box which consisted of a wheel with colours, and when revolved, was pierced with a dart.” He said the defendant called out, “Come on. What has the green done?” Constable Hoare claimed he saw the Conbrough accept money and when the colours were covered he called out, “Who’ll throw the dart?” The dart was thrown and he said, “I’ll pay 3 to 1 the sixes.” Someone said, “Look out, the cops are here,” and the defendant was arrested. When Constable Hoare said, “You’ve been playing a game of chance.” He replied, “Yes! You’ve caught me.”

Conbrough pleaded guilty to the charges pointing out he had borrowed the box. His father was sick, and he explained he wanted to get money to send him away. He was fined £5 with costs and the machine was confiscated.