Battle for a Hotel Licence at Chelsea 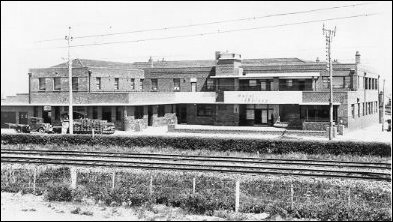 The debate as to whether a hotel should be built at Chelsea commenced with some intensity in 1913 and culminated with a poll in August of that year. The poll failed to attract sufficient votes for the matter to be resolved in the affirmative but the hotel licence continued to be an issue of contention until 1936. In that year a ‘large number of permanent residents’ petitioned the Licensing Court to reconsider the matter.

A poll of citizens on February 22, 1936 convinced the court that a modern residential hotel should be erected in Chelsea, and procedures were set in place to identify the person or company to whom the license should be granted. The court received two proposals together with objections to them from a number of ratepayers.

Under the chairmanship of Mr R Barr the court sat for many weeks to hear the arguments put forward by the Chelsea Hotel Company Pty Ltd and Mr J J Dennis, the two contenders, in support of their applications and at the same time to listen to the reasons why some residents believed neither party should be granted the privilege of conducting a hotel at Chelsea. [1]

The Chelsea Hotel Company was a Moore family enterprise. The Moores had been in business in Chelsea since 1913, conducting a wine saloon on the corner of Avondale Avenue and Point Nepean Road, the site which they intended to use to build ‘a fine palatial hotel [2]. Mr Campbell representing the interests of the Chelsea Hotel Company before the court, referred to the long involvement of the family in supplying liquor to the township when arguing the family should receive preference. Hitting out against the Dennis application, Campbell stressed that the Moores were not trying to reap the benefits of hard work done by someone else for they had been endeavouring to establish a licensed hotel as far back as 1925.

Thomas Henry Moore, aged 39, was the named in the Chelsea Hotel Company application as the nominee for the proposed hotel. He had resided in Chelsea since 1913 and had assisted his mother in conducting the wine saloon. To questions asked by Mr Morrison, the lawyer representing the objectors to the granting of the license, Thomas Moore agreed he had only been living continuously in Chelsea for the last four or five years. However, he said he had come back to help his mother and the theatrical career he had been following was not profitable. While agreeing he had never had any experience in managing hotels, he pointed out he had observed the management of many hotels while touring in other states and England.

In contrast to Thomas Moore, Mr Dennis had considerable experience in hotel management but could not claim the lengthy association of the Moore family with the district. Mr Dennis and his wife leased the Coburg Hotel in 1922 and moved to the Croxton Hotel in 1928 remaining there until 1931. He explained that if granted the licence, he would manage the bar operation while his wife managed the residential aspect of the business. Although a resident of Hawthorn, Dennis was the person who initiated the movement that led to the successful poll regarding the issuing of a liquor licence in Chelsea .

A great deal of the court’s time was taken up listening to arguments as to which was the better site for a hotel in Chelsea, and lawyers from both contending parties calling witnesses to support their cause. Where one contender appeared to have an advantage the opposition argued it was a disadvantage, or they would propose providing the same attribute for their site.

When Mr Barr, the chairman, challenged Mr Campbell’s claim that the Moore site was superior to that proposed by Dennis, the lawyer pointed to the bays on the roadway which allowed parking, a feature not present at the proposed Dennis site, and in addition the Dennis site was close to a public park used by many people as a means of access to the beach. Campbell claimed the Dennis application proposed to remove a busy garage from its corner site, an action which would congest traffic and create a danger to those using the park. [3]

Long time residents of Chelsea, several justices of the peace, a former Mayor of Chelsea and an estate agent all put forward their reasons for supporting the Moore application. They drew attention to the sound reputation of the nominee, closeness of the site to the business centre of the town, and presence of parking bays in contrast to the opposition’s proposed site that was too close to a public park, a factor that would ruin the park for recreation purposes. [4]

Mr Reed, in presenting and defending the Dennis application acknowledged the two sites under discussion were remarkably close together but he saw the Dennis site as having many advantages. The proposed site had a frontage of 186 feet to Point Nepean Road with a depth of 134 feet. It was bound on three sides by roads and although Showers Street was currently unmade Mr Dennis proposed to meet the cost of construction. In addition Mr Dennis had arranged with the Chelsea Council and the Country Roads Board to remake the road along the whole block and continue it to the kerbing thus making provision for parking bays. He was surprised about the criticism of the proposed hotel facing a park as many of the best hotels were so situated without criticism.

Ten witnesses were called in support of the Dennis case. They included a former mayor of the city, the health officer and solicitor for the municipality, three police officers, and residents who attested to the character of the Dennis family members and their success in conducting a licensed business. They also commented on the suitability of the proposed site. [5]

They saw the more distant location of the site from the business centre as an advantage and challenged the significance given to the park by the witnesses supporting the alternative application. Waddham, a solicitor and resident of Chelsea for eleven years, said the gravel path between the lawns was mainly used as a thorough-fare to the beach and the suggestion by the opposition that the park was often used by 30 or 40 people an exaggeration. He thought they had ‘painted the lily’. [6]

The Dennis plan for the Chelsea hotel was estimated to cost £12,000 by the architect, Mr P J O’Connor of Collins Street, Melbourne. Provision was made for nineteen single rooms and seven double rooms, a different configuration to that proposed by Moore’s architect, but a large dining room, several lounges and a fernery for afternoon tea were part of the design. The bar accommodation was on the southern side of the building. According to the Chelsea News report, “a novel feature of the plan was shower cubicles for the use of visitors who desired to spend the day in Chelsea swimming and enjoying the beach.” [7]

Mr R H McIntyre, the architect for the Chelsea Hotel proposed by the Moore family said the building was expected to cost from £16,000 to £18,000. The plan was for eighteen double bedrooms and twelve single bedrooms with a septic tank system providing for sanitation. The bar was described as luxurious with ample seats. [8] 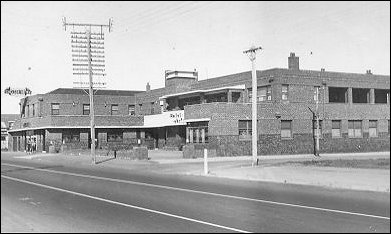 After listening to the presentation of Mr Reed, the solicitor representing the Dennis application, the court adjourned until May 24, 1936 when the arguments of the objectors were to be heard. On that date about fourteen witnesses were assembled, including Crs Meier, Beadsworth and Matthews who planned to object to a licence being granted to the Chelsea Hotel Company. According to the newspaper report the small courthouse was uncomfortably crowded but by 10.30, the appointed commencement time, the members of the bench had not appeared. [9] Mr Gorman, the lawyer for the objectors, was seen in conference with the interested parties just before the bench took their seats. On their arrival Mr Gorman asked for and was granted a stay of proceeding for one hour. The witnesses and the visitors to the courthouse took the opportunity to stand outside and enjoy the sun. On the resumption of the court both Mr Campbell for the Chelsea Hotel Company and Mr Gorman for the objectors closed their cases without calling any further witnesses. Everyone was told the court reserved its decision and they would not be required. This was viewed as a sensational ending to procedures covering several weeks. [10]

Ultimately it was the Moore family company, Chelsea Hotel Company, that gained the licence and set about building Chelsea’s first hotel on the corner of Avondale Avenue and Point Nepean Road. A report in the Chelsea News described the two storey hotel designed by Mr McIntyre as modern with side balconies and open concrete roofs over some portions of the building. There were twenty five bedrooms on the first floor with six blocks of bathrooms. The kitchen equipment made provision for steam cooking and heating as well as refrigerated cool room and serving cabinets but a most striking feature was seen to be the centre tower which was to house a neon sign. 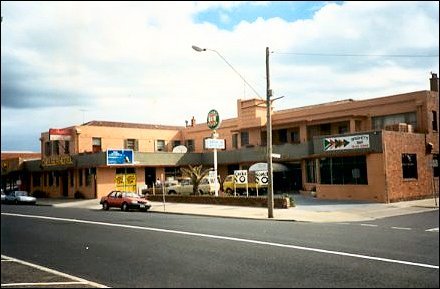 At last Chelsea was to have its own hotel but was a deal done regarding the granting of the licence? Why was there such an abrupt ending to the court hearing? Why were the gathered witnesses not called? Did the Dennis group surrender their interest in Chelsea to invest their money elsewhere? These questions may never be answered satisfactorily so the mystery remains.