George Coote, a reporter with the Moorabbin News, 1974. Leader Collection.

George Coote was a reporter with the Leader Newspaper Group, writing about people and events in Kingston over many years. Born in 1928 at Kyneton in country Victoria, but spending his early years at 12 Elm Grove, Parkdale, he witnessed great changes in the area. As he said, “When you have lived so long in an area you remember things.” [1] He remembered the dust bowl that was to become the Moorabbin Airport and Dr Spock the baby expert speaking at the Anti-Vietnam rally held in the Moorabbin Town Hall. As George said, “It was probably the second occasion that the Town Hall was full. It was also at Moorabbin that both Malcolm Fraser and Gough Whitlam opened their election campaigns although in different years.”

He remembered the Great Depression of the 1930’s when he said, “I thought my father had a night job. He would go out with a sailor friend at night and come back with a hessian bag full of vegetables. We lived on that. They were heavy times. Perhaps he was getting the vegetables from my grandfather’s market garden in Dingley?” [2]

Leaving St Patrick’s primary school during the Second World War, George went with his family to Sydney, where his father had rejoined the navy as a chief diver. “There he was diving every day. He built the boom net and he dived on the Japanese submarines, and it was in 1942 he brought those Jap subs up,” George told John Cribbin. [3] Later as a journalist, he laughingly recalled, he wrote this story of his father about four times and sold it to the Australian Post every time they changed editors.

It was in Sydney that he completed his secondary education at fourteen years of age and commenced his first job as a messenger boy with a Sydney newspaper. “We got ten shillings for delivering engraving blocks to the Sydney dailies, but I used to hop on the back of a tram and keep the ten shillings. I was a scoundrel,” he said. [4]

Returning to Parkdale at sixteen years of age he found work as a block maker and then joined the Standard News in Cheltenham as a compositor and linotype operator. George recalled that he started to write football reports for the Mordialloc News on the linotype machine and receive payment on the basis of ‘tuppence ha’penny’ per line. “As I was the person processing my own copy I used to bump out the line with spaces as much as I could,” he recalled with a grin. [5] Subsequently, George Coote was asked to write general articles, not only sport, and he did that moving from one Standard newspaper to another before being appointed managing editor of the Peninsula Post, a position he held for eight years. [6] From that position he returned to the news desk as the chief reporter on the Moorabbin Standard for seven years before moving into the features department of the Leader. 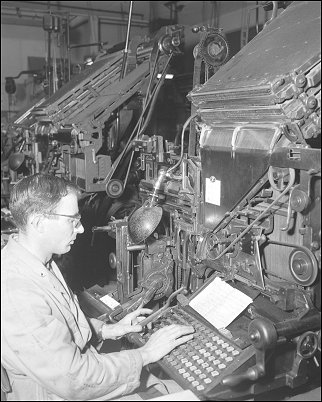 He commented, “Journalism is the greatest thing, much better than working, sticking your nose into everyone’s business and finding out how the world runs.” [7] He went on, “Papers were one man shows at the time. One person gathered the news, processed, subbed it, laid it out with pencil, subbed in the pictures, wrote the headlines and then watched to make sure the right caption was under the right picture. And then you even read the page proofs. It was a one man show right from start to finish. [8]

“It was grass roots journalism and grass roots publishing. Unlike the dailies if some reader wanted to take umbrage you were within reach. You could get a punch on the nose simply walking up the street. It was not like the daily newspapers where you were beyond the reach of the public. You had to know what was happening around you.”

Moorabbin after the war had a unique set of circumstances, George Coote claimed. “There was plenty of money, land developers were willing to undertake sub-divisions, there was a building boom ready to launch and there was a new process in building being used called brick veneer. Prior to this time houses had been solid brick or weatherboard. The amalgamation of the two, a timber frame with a brick on the outside was the way forward. Moorabbin had broad acres of market gardens, and it was easy to dig and move around the sand. As a result there were vast numbers of houses with no streets. The tracks were impassable in summer for mothers attempting to drag pushers through the sand, and in winter they became boggy mires. Council meetings used to be full of angry homeowners asking when the council was going to construct their street so they could get in and out, and so deliveries of bread and milk could be made.” [9]

For thirty one years he wrote a column called ‘The Fifth Column’ which appeared in several of the Standard newspapers in the area and at times drew the ire of local councillor because of his comments on what he saw as lack of appropriate action. He wrote many articles drawing on his knowledge of the history of the area including “Finish line for Epsom”, “New life for historic tram rails” and “Chronicle of a Quest for Truth”. [10] Politically to the left, he was actively opposed to conscription during the Vietnam War in the 1960s and went to North Vietnam to see for himself what was happening. For thirteen years he was the editor of Scope, the paper of the trade unions and one of his big scoops was to interview Yassar Arafat, the Palestinian leader in 1974. [11] 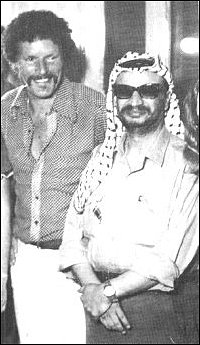 With Yassar Arafat in 1974. Leader Collection.

A colleague of George Coote wrote that, “Aside from journalism, in 1956 George was in the pentathlon squad for the Melbourne Olympic Games. Swimming was his forte, with a state title to his name, and he won many trophies with the Mordialloc Life Saving Club , where a race is named in his honor. [12]

In 1999, at seventy years of age, George Coote retired from the Leader group of newspapers planning to continue writing travel books, contributing to in-flight magazines for international airlines, and writing further editions of his “Serious Joke Books”. These books, launched at Laffey pub in Dublin, contained a carefully accrued collection of “wisecracks, puns, jokes, quips, gags, insults, toasts, teasers and roasts” for use as a reference by writers and speakers. “Sorry gents, the pub won’t be open for an hour, but would you like to come in for a drink while you’re waiting?” was a typical offering. [13]

George Coote’s retirement was brief as he died in January 2000 after a short illness. He died from cancer. 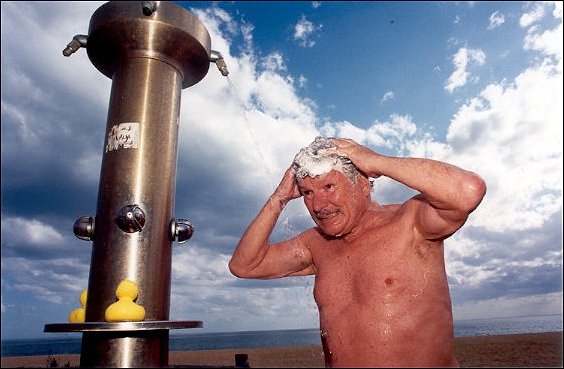 George Coote showering at the Mordialloc beach during a gas shut down, 1998. Leader Collection.