The Beginning: Bicycle Club at Cheltenham 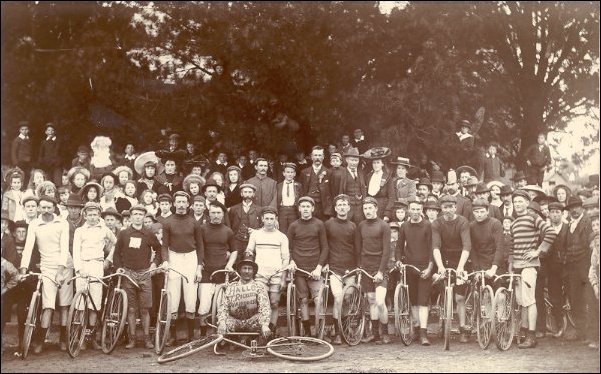 Participants in Moorabbin Bicycle Club’s 25 mile Road Race, 1904. Everest LePage is in the centre of the back row in white shirt, tie and cap with a flower in his buttonhole. Courtesy, Len LePage.

The crowd gathered on the corner of Point Nepean and Charman roads Cheltenham in September 1903 to witness a bicycle road race of local competitors. Everest Le Page, a seventeen years old at the time, and years later a mayor of Moorabbin, led the race off. The handicappers had given him the 17 yard mark. Under the direction of the starter, the Shire President, Cr W Barnett, Dunn and Kelly were off five minutes after LePage with the other twenty nine competitors following in intervals of one or two minutes.

The course was three times along Point Nepean Road to Mordialloc back along Beach Road and up Charman Road. The finish was opposite Dr Weigall’s residence in Charman Road. One local newspaper gives a description of the race. “Everest LePage was eagerly looked for on the first round, but his tyre had blown out, and he had been compelled to withdraw from the contest. W Dunn and G Kelly who had paced each other round, were the first to appear, followed by R Monk and Penny. Parkes and Judd in brand new red and blue guernseys paced about, and came next, followed by J Judd and A Dunn. W Barnett had lost a good deal of ground owing to having embraced Mother earth at an early stage in the race. Bodsworth, with the honour of Sandringham at stake, paced by with three others on his wheel, whilst Hutchinson and S Black had come together though the latter had also fallen.”

Monk continued to gain ground in the second circuit and persisted to ride strongly in the final round. It was at this juncture that he overtook Dunn and Kelly to ride home a winner some ten seconds ahead of them. Dunn took second place but O Judd out pedalled Kelly to take third position. T Ricketts, a scratch marker, had the fastest time of 1 hour 9 minutes 9 seconds, earning a set of gold sleeve links, but his time was insufficient to gain a place in the first thirteen. R Monk took the honour of winning the race with the time of 1 hour 9 minutes and 50 seconds from the 10 minute mark. His reward was a gold locket valued at £3-10s. Second prize was a gold pendant valued at £2, and third a gold compass pin valued at £1-10s.

Monk’s victory was well received by the crowd and expected by many people watching the race. But it was E. Kelly who received the rowdiest reception as he crossed the finishing line. The father of thirteen children and the oldest competitor, Kelly in the prime of life, according to the reporter from the Brighton Southern Cross, was judged the hero of the race.

That night about sixty people attended the smoke night chaired by Cr Barnett. After musical presentations by Messrs Morrison, Walstab, Cullen, W.Judd, Sherwood and a recitation by Dr Joyce, T Ricketts moved that a cycling club be formed. The motion was carried with a great deal of enthusiasm. About twenty members were enrolled and a date set for a subsequent meeting where office bearers were elected.