When the Victorian government opened the Carrum Swamp to settlement in 1871, Mark Young was one of the men who made a successful application for a licence. Prior to his residency on the swamp he lived at Ballarat and Melbourne, but later moved to Frankston and Tortoise Island in Westernport Bay.

An Irishman, Young came to the colony of Victoria on the ‘David G Fleming’ and arrived at Sandridge on November 27, 1857 when he journeyed to Ballarat. There he was involved in various occupations including keeping a store with his brother. This he did until 1861 when he joined a rush to Otago in New Zealand. There he kept stores at various locations for a short period of time before returning to Ballarat in 1862. He married Julia Baker on February 17, 1863 at St Alipius Roman Catholic Church, and together they had six children, five of whom were born in Ballarat. When the last child was born in Prahran in 1873 the family was living on the swamp. [1]

In Ballarat Young conducted the White Hart Hotel in Sturt Street and became very active in local affairs, serving on the boards of both the hospital and the benevolent institute, and for many years as hose officer in the Ballarat West volunteer fire brigade. He assisted other Irishmen in the foundation of the Ballarat Hibernian Benefit Society and later worked to achieve the amalgamation of that society with the Australian Catholic Benefit Society to form the Hibernian Australian Catholic Benefit Society of which he was elected first president. Selling the White Hart Hotel he purchased the Unicorn Hotel also in Sturt Street Ballarat before moving to Melbourne where he bought the business of the old Hummum’s Hotel in Bourke Street East. This hotel he renamed The Unicorn. Although a successful operation, Mark Young sold this business because of his wife’s ill health and moved with his family on September 19, 1872 to the Carrum Swamp where he had built a substantial house. [2]

Young had pegged out 187 acres of land which like numerous other allotments on the swamp had a serious water problem. To reach the back boundary of his property he was forced to make use of a rowing boat. Nevertheless, despite its physical condition Young persevered, building a substantial home and making other capital improvements to the property to the value of £1000. He joined with other men who had made selections on the swamp in pressing the government to make improvements to its drainage, and chaired a meeting of selectors at Mordialloc on March 11, 1872 where they decided to tax themselves one shilling for every acre of land they held and to do this for three years provided the government agreed to several conditions including making any new selectors liable to pay the tax. During this period Young was elected to the Dandenong Shire Council where he served as president in 1873.

A little over four years after the meeting at Mordialloc, Young, with several other selectors, appeared before the parliamentary select committee appointed to enquire into the promises made to the selectors regarding modifications made to the requirement that they should reside on their selection. [3] This condition was set out in the Land Act of 1869 under which the land was made available. By this time Young had left the swamp property to become the licensee of the Frankston Pier Hotel which he purchased for £380. However, he still had an interest in the swamp because in 1877 he bought from George Whitehead three hundred acres for £750. [4] 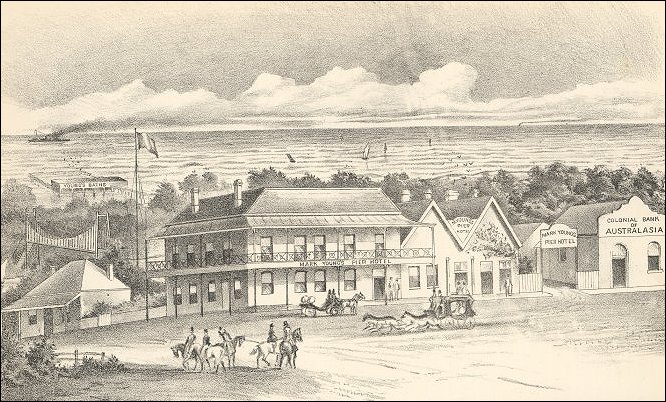 At Frankston Young engaged in various community and business ventures. He spent about £3700 during the 1880s boom enlarging his hotel, building baths and a suspension bridge across the Kannanook Creek. Consequently, he was a strong advocate of measures to encourage visitors to Frankston for they would patronise his establishment. He was elected to the Hastings Frankston Council and while a member sold his baths to the shire. Originally built at a cost of £950, he sold them for £500 but at the time they were operating at a loss of £100 per year. Young argued that despite the operational loss the baths were worthwhile maintaining because they attracted respectable people to the town, people who would not bathe on the beach because they considered such action as immodest. By 1900 they had received considerable damage by storms and wild seas and were described as ‘romantic ruins’ by visitors. [5]

Mark Young stood as an ‘independent liberal’ candidate in the 1880 elections for the Victorian Legislative Assembly. His platform was expounded in a letter published in the South Bourke and Mornington Journal, and during presentations at local meetings of voters. [6] He argued that the prevailing tensions and lamentable differences existing between political parties had to be ended harmoniously and that he could provide the solution by providing a medium course of action, supporting no particular party. By this means he hoped to restore public confidence and improve the circulation of capital.

He advocated reforms to the constitution to allow an increase in the number of provinces, a reduction in the qualifications required for membership of the Legislative Council, and a shortening of the term of office. The civil service, he also argued, was due for reform. Some members needed to be retrenched but those remaining given more security and stability in tenure.

Young believed that all restrictions on bona fide agriculturists settling on the available Crown lands should be removed and at the termination of the squatters’ licences the pastoral holdings should be subdivided so that the farmer could combine grazing with agriculture. This policy was no doubt influenced by his experience on the Carrum Swamp where the difficulties selectors had in meeting the conditions of residency and capital improvements were well known to him. Other proposals included legislating to allow mining on private property, the removal of vexatious taxation, subsidising large ocean steamship companies, and introducing an eligible class of migrants to provide an additional supply of labour in country regions. He expressed strong opposition to what he saw as to the tendency to centralise power encouraged by both past and current administrations. This he believed was most injurious to the permanent welfare of the colony.

Young’s bid for election to the Legislative Assembly failed but he continued to maintain his interest in local affairs. Other activities of Young included forming a company to explore a gold find on the Hastings Road but the vein proved to be insignificant. He was acknowledged as the person responsible for the establishment of the Langwarrin Encampment Ground, the site for the training of Victorian troops before their embarkation to the African or Boer War. He also purchased six hectares of prime land fronting Beach Street Frankston in late 1885 as a speculative venture before leaving the district in 1906 for Westernport. On Tortoise Island he became a farmer where he was badly injured and had to be transported to a hospital in Melbourne.

He died at Malvern on July 27, 1921 when he was ninety one years of age and was buried in the Kew Cemetery. His wife and two of his six children died before him. [7]