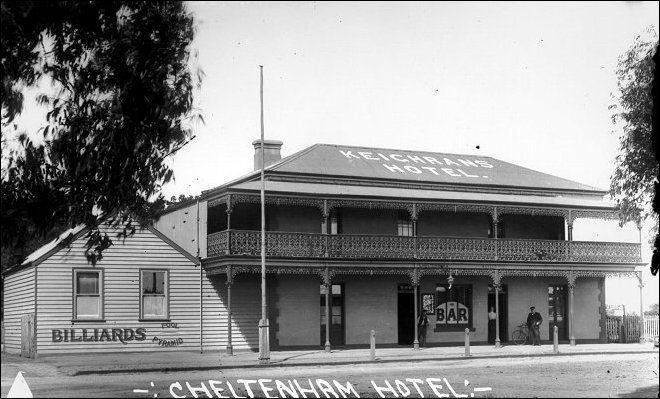 In the history of Kingston and its preceding municipalities there are men, less frequently women, who stand out for their eccentric behaviour. The exploits of these ‘larger than life’ individuals were talked about and passed by word of mouth from one generation to another. Charles Keighran was such a man. Born near Sydney in 1846 he set up a store in Albury when he was 23 years old. He left after three years to manage hotels in various parts of Queensland and other Australian colonies. Following a few months in Teetulpa in South Australia he arrived in Cheltenham to take over the hotel originally built by Whorral close to the corner of Point Nepean Road and Centre Dandenong Road, and the one that gave the district its name. [1]

Len Allnutt said Keighan of Cheltenham Hotel was known as Paddy but this was not his proper name. Len explained, “My grandfather, George Allnutt, sent in an account for a job he had completed for Keighran and received a cheque in return. The cheque was made out to Patrick Allnutt. Grandfather annoyed by what he considered to be a deliberate error stormed down to have a word to Keighran whose response was, ‘I treat you the same way you treat me, calling me Paddy’.” Len Allnutt commented that the local publican was always having rows with people as he believed it brought in business. [2]

There are several other stories about Charles Keighran, prankster and shrewd business man, recounted by Len Allnutt. [3] One tale was about the annual bike race to Mordialloc and Keighran’s boast. The event, open only to locals, was from Cheltenham down Point Nepean Road, across the creek to the recreation ground at Mordialloc where one circuit of the ground had to be completed before passing the finishing post. To the surprise of hotel patrons, Keighran, a short fat bowlegged man with a red beard in his early fifties, indicated he was going to compete. He not only said he would compete but would be the first rider into the recreation ground at Mordialloc on New Year’s Day.

This proved a challenge to many and bets were laid on Keighran’s ability to match his rhetoric. Keighran himself laid out a considerable sum, backing himself, so he had much to lose. He bought a bike and went into training and on the day of the race appeared appropriately dressed in shorts accompanied by an assistant to give him a push when the time came to start the race.

When the starter gave the signal to commence the race Keighran’s younger and fitter competitors put their heads down and pressed hard on their pedals jostling for a good position as they shot off down the road. Keighran’s start was less explosive yet he was away. Not too far down the road he went into a side road where a two horse cab was waiting. Putting the bike in the cab, and with Keighran lying down on the floor, the cab driver whipped the horses into a gallop in pursuit of the riders. When he approaches the riders the driver yelled out, ‘Emergency, Emergency, Make way’. They responded by moving off the road into the rough, slowing their progress, and allowing the cab to pass. When the cab arrived at the creek Keighran jumped out, retrieved his bike to ride into the recreation ground. He was about half way around when all the other bike riders passed him. Shortly after the arguments began. [4] 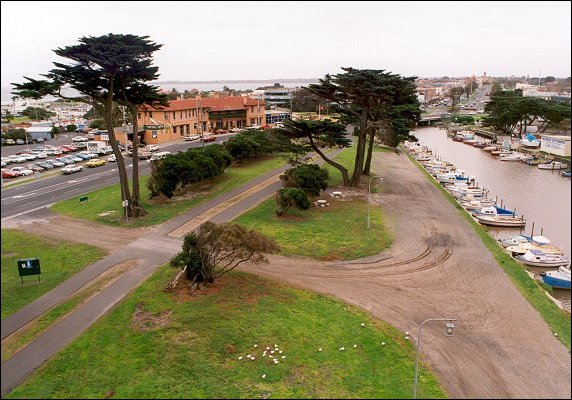 Many refused to pay their debts resulting from their bets. They claimed that Keighran said he would win while he argued the wager was about whether he would be first to the recreation ground. How the story ended Len Allnutt did not say, but he did observe that while all the talk and shouting was going on the men were drinking in Keighran’s hotel.

Two other stories Len Allnutt tells concern encounters between Keighran and Dr Joyce who lived at Moorabbin but attended patients throughout the district. Dr Joyce and Charles Keighran were amongst the first to be connected to the new Cheltenham telephone exchange. Shortly after this event Keighran rang Dr Joyce very late at night claiming there was an emergency. Dr Joyce left his warm bed to respond in his customary manner to answer a medical need only to find it was a hoax.

A short time passed before Dr Joyce, masquerading as an Irish auctioneer and estate agent, rang Keighran to arrange a lunch for himself and two Irish clients. He explained the group was going down to inspect land at Carrum and he wanted a special lunch at twelve. A table was reserved and the menu was discussed; pea soup, roast lamb and plum pudding. On the day Keighran was watching and waiting for his visitors when Dr Joyce arrived and demanded lunch. Joyce claimed the portions he was served were miserly and it was the worst he had ever had. Was Keighran holding back servings to cater for visitors, he asked, mimicking the voice he used to make the original ‘real estate agent’ booking. He then let others in Cheltenham in on the joke against Keighran which resulted in great hilarity and perhaps some embarrassment to Keighran.

The second story involving Dr Joyce and Keighran occurred when the Bushmen’s Contingent had an overnight stay at Cheltenham on their way from Langwarrin to their embarkation at Port Melbourne to fight in South Africa. Keighran rallied local support to give the Bushmen a proper send off. People flocked from everywhere to such an extent that not everyone was able to get into the Cheltenham Hotel. They were standing in the yard, on the roadway, and in a large washhouse at the back of the hotel. Everyone was having a good time but Keighran realized he was running out of grog so he added a little water to the whisky to spin it out.

Some years later, when Dr Joyce retired from his medical practice and was residing in a Mentone nursing home, he was interviewed by a reporter from the Moorabbin News and asked to recall his memories of his time as a young doctor. Joyce told of wild life grazing in the paddocks when there were not many people living in Moorabbin and of the greatest day there ever was in Cheltenham; the time the Bushmen bivouacked overnight at Cheltenham and Keighran watered the whisky. He pointed out that he was among the crowd jammed in the washhouse when the deed was done. [5]

When the story was published Dr Joyce’s son, Colin, had taken over the medical practice. According to Len Allnutt , “When Colin read the story he saw red. He got in his car and rushed down to the Moorabbin News Office and demanded to see the editor. Thumping the desk and using strong language he said, ‘if this paper has nothing better to publish than that my old man was stuck in a washhouse behind a pub, drinking watered down whisky you ought to be closed up’.” Later Dr Colin Joyce serving as a medical officer was killed in the Middle East during the Second World War.

Aged in his seventies Keighran sold the Cheltenham Hotel in the early 1920s to Ephraim F Alloid and left Cheltenham. The hotel continued under several owners and managers but later the licence to sell liquor was lost so it became a guest house or coffee palace with Mrs Walker managing it for many years. The building was demolished in the late 1930s creating vacant land where visiting circuses such as Perry’s and Wirth’s used to pitch their tents to entertain the local children and their parents.