Henry Comport, born at Stoke, a small village of less than five hundred people in Kent, England, came to Melbourne in 1852 when he was in his early twenties. After spending a couple of years prospecting for gold he settled in Cheltenham where he resided until his death in July 1909. During that time he worked as a market gardener, selected land on the Carrum Swamp, contributed to the community as a councillor, justice of the peace, and trustee of the Cheltenham Cemetery, as well as supporting his church in a significant way

Henry Comport was first elected to the Moorabbin District Road Board on August 11, 1864 for a period of five years; in 1879 he rejoined the Shire Council and continued to hold office for ten years. In the roles of board member and councillor he took part in decisions that significantly influenced the development of the district. Comport was adamant that the use of nightsoil on market gardens should be stopped and it was he who suggested, at a council meeting, that steel tramways should be constructed to reduce road maintenance costs and to facilitate the passage of night soil juggernauts to nightsoil depots in one direction and market gardener wagons in the other. But Comport was not always successful in gaining what he wanted at Council meetings. He vigorously opposed the purchase of land on the corner of what is today Nepean Highway and South Road for the building of a Board Office and subsequently Shire Office. He, together with colleagues Attenborough, Ruse and Jamison, wanted the office to be closer to Cheltenham, geographically more central to the district as a whole. However, Thomas Bent and colleagues representing areas to the north of the district defeated them.

At the time of his marriage on July 8, 1854 to Rebecca Schooling at St Mark’s Church, Collingwood, he listed his place of residence as Collingwood. In other documents, in that same year, he indicated he was living at Cheltenham. Moorabbin Road Board rate records for 1862 give his address as Burnetts Road, where he lived in a weatherboard house on a property valued at £25. [1] Records for 1864–1866 show Comport’s place of residence as Bernard Street, Cheltenham where he was growing tomatoes and manufacturing a tomato sauce which brought him international recognition; ‘Comport’s Celebrated Tomato Sauce’.[2] He imported cabbage seed known as ‘Comport’s Little Drum’ and introduced the apple ‘Gott’s Seedling’, a profitable exercise. Later he grew chicory on another parcel of land but this was not a success. [3]

In July 1867 he purchased eighteen acres of land for £110 from Robert Googe. This land was bounded by Tulip Street (later Park Road) to the South and Charman Road to the East. On the rise of that land he built his home and raised, with his wife Rebecca, eight of nine children, five of whom were born in the house. [4] 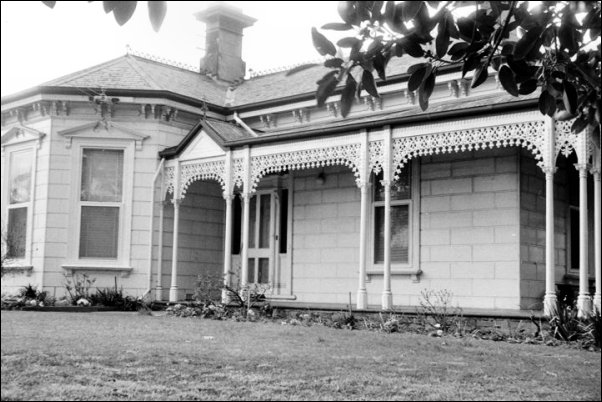 On July 3, 1882 the title of one rood and 34 perches of his property passed to the Board of Land and Works for £125 and it was on this slither of land that a section of the railway line from Caulfield to Mordialloc was constructed. The railway line divided his property into two sections, the bulk of which was sold to George Gardiner, William O’Shea and John O’Shea for £4250 in 1881. [5] In 1904 the land remaining in the ownership of Henry Comport passed to his son, Walter Everist Comport for the sum of twenty pounds. [6]

Earlier, in 1871, Henry Comport pegged out one hundred and thirty three acres on the Carrum Swamp where he set about growing potatoes and other vegetables. Here, like other selectors, he was beset with too much water. Although he had constructed a two-room hut, the land was too damp to reside on it continuously. As a result he was threatened with expulsion by the Department of Land as he was not meeting the condition of residency associated with the original grant. In the effort to forestall the Secretary of the Lands Office giving his grant to someone else, Comport wrote pointing out that he was a ‘bona fide’ selector and had resided on his property as “much as any man could be expected at the risk of my life in one instance especially being up to my arm pits in water”. He also drew the attention of the Lands Officer to the absence of the word ‘continuously’ in legislation where requirements placed on selectors were given. [7] Despite these arguments Comport failed to convince the authorities to change their position at that time.

Writing several months later in August 1876, to Minister James Casey, Comport noted, “I will not reproach you for a moment believing you did what your conscience dictated to be right” but he went on to express his view that the Minister should have been more lenient and used his discretionary powers to resolve the situation in his (Comport’s) favour. After all, Comport explained, “I am a poor man with a large family … I must not allow my family to be ruined without making a stir. It is of more consequence to me than you are aware of the labour and expenses on my selection have been about two hundred pounds … my family say I have worn myself grey down there … I have worked very hard at the risk of life and limb and what for just to endeavour honestly to comply with an Act of Parliament.” Comport continued, pointing out his place of residence at Cheltenham was only just over the prescribed distance of five miles from his selection, and a previous minister had indicated he would not enforce the residence clause where bona fides selectors were involved. He concluded his letter with the information that he had lived at Cheltenham for twenty two years, could see Carrum from his window, was married in the colony and trusted the Minister would favour him with an early reply to ease his suspense. [8]

Comport was able to press his personal case and those of other selectors failing the residency requirement when he attended a Parliamentary inquiry into “the alleged promise made to certain selectors on the Carrum Carrum Swamp” held in December 1876. [9] That committee chaired by James Purves reported to parliament that a promise was made that selectors would not be expected to reside on their selections provided they made other improvements. Moreover, the committee recognized that selectors expended their time and money on the basis of that promise. [10] As a result Comport did not lose his land on the Swamp and later was able to rent it to other farmers. 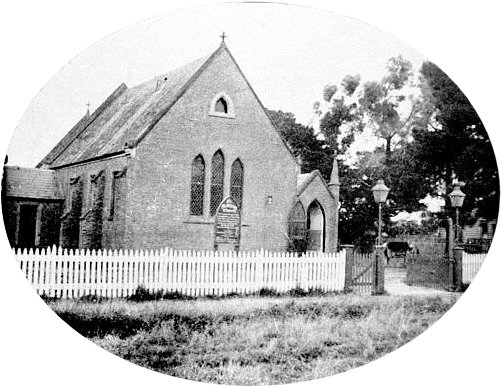 Back at his place of residence in Cheltenham he not only represented the Riding on the District Road Board and later the Shire Council, he represented his local church on the Synod of the Church of England diocese of Melbourne for 10 years. Although initially Cheltenham was part of the parish of St Andrew’s Brighton Henry Comport and his family probably attended church services either at Silver Street or Weatherall Road where church meetings were held on Sunday and school on week days. This would have been the case until a new church, St Matthew’s, was built on the corner of Schnapper Point Road and Tulip Road (Nepean Highway and Park Road). Comport played a significant role in the building of this church being on the building committee and a member of the parish vestry. He was a regular member of the congregation up to the time of his death. 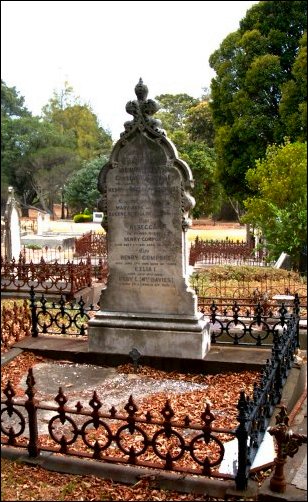 Grave of Henry Comport and his wife Rebecca in the Cheltenham Cemetery, 2003.

Henry Comport died at his home, ‘Stoke Eavely’ in Cheltenham from heart failure on June 27, 1909. He was eighty years of age. [11] His wife Rebecca died before him in 1895. He was buried in the Cheltenham Cemetery, with her, two days after his death.