Eighteen sixty two saw the beginnings of local government in the Moorabbin district when the area was separated from Brighton with the creation of the Moorabbin Roads Board. Stretching from North Road to the Mordialloc Creek and from Port Phillip Bay to Heatherton in the east, the area today incorporates parts of several municipalities; Kingston, Bayside, Glen Eira and Monash.

While tinkering with boundaries occurred over time, the first major severance from Moorabbin was when the Borough of Sandringham was created in 1917. Three years later, after persistent agitation, on May 27, 1920 Mordialloc, Parkdale and Mentone became part of the new Borough of Mordialloc. With this change the Shire of Moorabbin no longer had authority for land with a frontage to Port Phillip Bay.

Sandringham municipality was created a City in 1923 and Mordialloc reached that status in 1926, but it was not until 1934 that Sir Stanley Argyle, Premier of Victoria, visited Moorabbin to read the proclamation granting similar status to the former Shire of Moorabbin. [1] 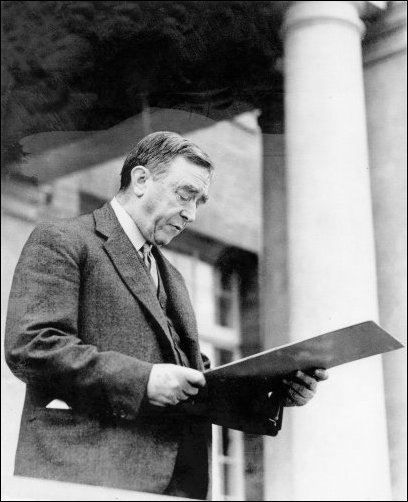 Sir Stanley Argyle reads the proclamation creating the City of Moorabbin from the steps of the Council Chambers on Point Nepean Road, Moorabbin. Courtesy Ian Argyle.

Sir Stanley Argyle in his speech commented that Moorabbin would always be remembered for having given to politics Sir Thomas Bent, a person who rose from being president of the Moorabbin Shire on six occasions to being Premier of the State. The Moorabbin district, he said, had sprung from being a humble market gardening area to become a fine residential suburb with important industries. He noted that the word Moorabbin was an aboriginal name meaning ‘a resting place’ but he suggested it must not be thought that Moorabbin was by any means quiet. Sir Stanley pointed to the fact that the municipality had the busiest thoroughfare in the metropolitan area passing through it, a highway that led to the most beautiful seaside resorts; a feature which assured Moorabbin of a bright and prosperous future. [2] 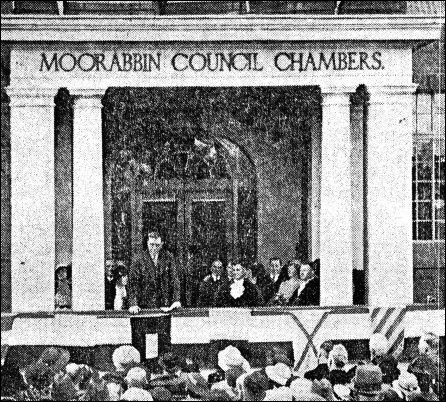 Sir Stanley Argyle speaks to the crowd at the reading of the proclamation. Mayor and Town Clerk, together with official guests under the portico of the Moorabbin Council Chambers.

The Mayor of Moorabbin, Councillor Sheppard and Town Clerk, W B Thomas wearing their new robes of office for the first time joined 275 official guests for afternoon tea in the town hall.