Annette Kellermann. From Burren, P., Mentone: The Place for a School, 1984.

A century ago one of Australia’s earliest feminists lived in Mentone. She would not have called herself a ‘feminist’ but her feisty behaviour and a lifetime of daring achievements indicate that such a description could be applied. She scoffed at the social restrictions that women endured in her era and pushed back the boundaries. This strong and independent woman was Annette Kellermann.

Annette Kellermann was born in Sydney in 1886. As a child she contracted polio and her legs were weakened by the disease. A doctor suggested that swimming would be beneficial in her rehabilitation so she began attending Dick Cavill’s baths in Sydney Harbour near the later site of the Opera House. The results of this were amazing. From being an apprehensive non-swimmer Annette soon learned the skill and began competing in races against the other patrons at the venue. By 1900 she claimed to be the champion female swimmer in NSW over several distances. This was a great achievement despite the small field of rivals that existed then.

The Kellermann family moved to Melbourne around the time of Federation. Annette’s parents were musicians, her mother, Madame Charbonnet, having migrated to Australia about 1880 from France and married Frederick Kellermann, a violinist. Madame Charbonnet seemed to be the driving force in the family for in Melbourne she began as a music teacher in the city, and when the family settled in Mentone she also took up music teaching at the Mentone High School run by the Simpsons (the forerunner of Mentone Girls’ Grammar School). Annette and her younger sister, Marcelle, attended the Simpsons’ school while her brothers, Maurice and Fred, went to McCristal’s Mentone College near their home in Palermo Street. It should be said that the Kellermanns moved several times, perhaps because they found it hard to pay the rent out of income derived from music lessons.

Annette quickly came under notice in 1903 while at the girls’ college. She involved herself in sport, taking part in a once-only cricket game against the boys from McCristal’s college. (The match ended in disarray when a girl had some teeth knocked out trying to stop a hefty slog by one of the lads.) But it was swimming that was to bring Annette into the public arena and eventually make her name world famous. At first she began teaching her fellow students the basic swimming strokes, conducting lessons at school and later at Mentone baths over the road from Mentone Hotel, just down the road from her home. The owners of the baths invited her to give swimming demonstrations and soon she was doing shows at Brighton and other places around the bay. Annette began extending the performances to include diving, adding novelty dives in tandem with her ten-year-old brother, Fred. In January 1905 she went to Adelaide for a series of aquatic displays at the City Baths, receiving much press coverage for her night performances under electric lighting. As a teenager she had begun in show business. 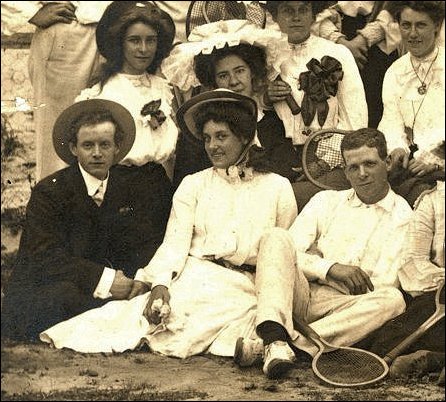 In 1904 the Melbourne promoters of shows at Wirth’s Olympia near Princes Bridge railway station in the city hired Annette to perform professionally. She had to dive into a glass tank from a tower and demonstrate underwater swimming. At seventeen and still at school she was doing several shows a week and earning ten pounds for her efforts. No doubt her parents encouraged her all the way as the money was badly needed. Annette later took part in a stage production called Breaking of the Drought at Melbourne’s Theatre Royal.

Of course Annette’s profile in Mentone and among her school friends grew in importance. With her classmates she planned and produced amateur variety shows for the parents and friends of the school, her flair for public performance growing as she approached adulthood. An involuntary public display put Annette in the spotlight while she was still at school. She and her friends had arranged to meet at a dance to be held at Cheltenham’s Protestant Hall and Annette made a red frock from decorative paper left over after a stage show. She missed the 8 p.m. train from Mentone and decided to walk up the line rather than wait for the next train at 9 o’clock. As she walked along the rails towards Cheltenham rain began to fall and red dye from her paper dress ran down her legs. Worse was to come. When Annette entered the dance hall she was immediately sought after as a partner, but not far into the dance a section of her soaked attire fell away to leave her standing with bloomers displayed as friends rushed her to the cloakroom.

Early in 1905 Annette began to develop her ability for long distance swimming when she swam from Dight’s Falls near Collingwood all the way down the Yarra to a point beyond the city, a distance claimed to be nearly ten miles. In April she boarded the R.M.S. Ophir with her father as they headed for London. Their aim was to break into show business on the world stage using Annette’s swimming and diving talents as the medium. It took some time for the Kellermann dream to come true. Annette’s long distance swimming feats in southern England were remarkable but it was not until she did a four-hour swim in the Thames between Putney Bridge and Blackwall that she got her break. The Daily Mirror sponsored her in an attempt on the English Channel during August, 1905. Several male swimmers and Annette, the sole woman, set out for France. They all failed to make the distance. Annette received much publicity because at that stage no woman had ever swum the narrow sea stretch to Calais.

Undaunted, the Kellermanns moved to Europe where Annette entered a seven-mile race down the Seine, and Parisians watched her come third in a contest with a field of male swimmers. Some young French gallants excitedly surrounded the young Australian and made her ride in a carriage to her hotel, the novelty being that the young men took the place of the horse, running between the shafts of the vehicle as the heroine was cheered all the way. In 1906 Annette won a challenge race in the Danube against an Austrian countess with an endurance swim of 22 miles. In the same year she made two more attempts on the English Channel, reaching a point very near to France in the second one after over ten hours in the sea and a final capitulation to sea-sickness. But Annette was moving to more lucrative pursuits.

In 1906 the Kellermann talents were on view at London’s Hippodrome where Annette was part of vaudeville in various aquatic acts done in glass tanks. The next year saw her move to USA. She went on stage in a number of places including Chicago and Boston, her appearance in the latter landing her in trouble. She strode on to Boston beach wearing a one piece bathing costume that she had made by stitching stockings on to a boy’s swimsuit. She was arrested and charged with indecency. A court appearance resulted in her being acquitted but not before she received enormous publicity, for it was a time when the matter of beach wear, especially that of females, was a hot issue. Annette was aware of this and her challenge to the authorities gave her much needed notice in the press and did her career no harm at all.

Her show business career prospered and she became interested in the movies. This brought her in contact with James Sullivan, a cameraman, whom she married in 1912. She moved to the Hollywood scene and made a series of films where she played roles in fanciful stories about sea heroines and mermaids. Among them were Neptune’s Daughter and Queen of the Sea, made between 1916 and 1918. These movies featured her swimming and diving skills where she did all her own stunts, never seeking to avoid danger. She even dived into the sea off high rocky cliffs in one scene. In 1924 she made Venus of the South Seas in New Zealand.

Annette Kellermann was a lifelong teetotaller and a vegetarian. In 1918 her book, Physical Beauty and How to Keep Fit, advised women on health and scoffed at ideas that it was unladylike to indulge in sport and physical training. She said that the bodily fitness of her recommendation only served to make a woman more feminine and attractive. She wrote other books on swimming skills at this time.

Through the inter-war period Annette remained in USA, involving herself in ventures relating to swimming, fitness and the stage. She travelled widely and when World War 2 broke out went on tours entertaining the troops. Her visits to Australia involved Red Cross work and a period assisting Sister Kenny in the fight to find a therapy for effective treatment of poliomyelitis. At other times she involved herself in tennis and golf as well as running a health foods store at one stage.

Annette returned to live on the Gold Coast in Queensland in 1970 and spent much time at the beach where she delighted in demonstrating how high she could kick her legs and how easily she could touch her toes despite being in her eighties. She had no children and when she died in a Southport hospital in 1975 her sister, Marcelle, carried out Annette’s wish to have her ashes strewn from a plane flying over the sea off the Queensland coast.

In 1952 MGM made a movie about Annette’s life and called it Million Dollar Mermaid. It starred Esther Williams, a swimming star who had made many movies with aquatic scenes central to the story. Esther Williams, in her autobiography, recalls that Annette came on to the set of Million Dollar Mermaid and remarked that an Australian should have been in the title role. Perhaps the distortion of her own life in the American-style movie had disappointed her. Locals at Mordialloc and Mentone saw the movie in the early 1950s and few would have guessed that the main subject of the story had lived in Mentone fifty years earlier. Melbourne is not mentioned, let alone the Kellermanns’ sojourn in our bayside town just after 1900.

One hundred years on we can look back and marvel at the exploits of a young woman who broke out of a fairly restrictive social structure and lived a life full of challenges, one that must have been very fulfilling.