The Union Jack at Cheltenham School

April 24, 1929 was a special day at Cheltenham State School when a 18 foot by 9 foot Union Jack was unfurled on a pole that some people doubted would stand the strain as the flag moved in a light breeze. Colonel C E Merrett had brought the flag back to Cheltenham after a visit to England. It was a present from the boys and girls attending the school in Cheltenham, England, in the Cheviot Hills about one hundred miles from London.

The ceremony took place on the large tennis courts at the rear of the school where the flag pole was attached to one of the tennis court posts. A platform was erected on which were seated the speakers and special guests. Around them were gathered the six hundred students of the school with their teachers, parents and friends.

Colonel Merrett spoke about loyalty and was followed by Chief Inspector Saxton who was standing in for the Director of Eduction, Mr Hanson. Saxton expressed delight about the exchange of views between schools. He saw the first duty of students was loyalty to the Empire but they must extend their sympathy around the world. [1] 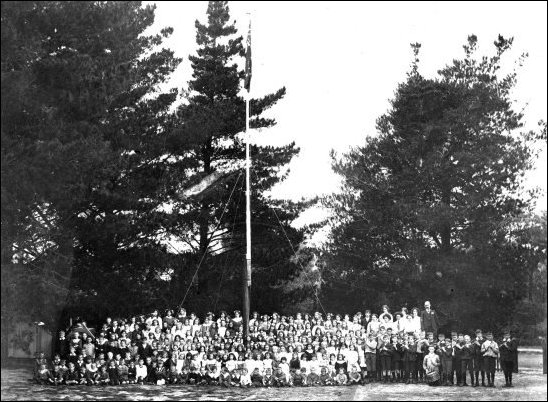 Pupils and teachers of the Cheltenham State School gathered around the flag pole. Courtesy, Moorabbin Historical Society and Kath Whelan.

A photograph from the Moorabbin Historical Society’s collection shows the students of Cheltenham State School No 84 gathered around the flag pole with a group of teachers to the left, behind a fife and drum. The flag pole is an extension placed on top of a more substantial pole. A note on the back of the photograph indicates a copy was sent to the Cheltenham school in England. Was this a photographic record of the event reported in the Moorabbin News in 1929?

A closer view of those pupils and teachers assembled around the flag pole.

A closer look at the photograph destroys the suggested connection between the newspaper report and the photograph from the society’s collection. The flag is not the Union Jack but the Australian flag, with the stars of the Southern Cross just being visible. When you scan the dress of the pupils and teachers you realise it comes from an earlier time, possibly 1912 when John Cubbins was head teacher. (Is that John Cubbins with the flower in his label?) Consequently, the 1929 occasion was not the first time that students were assembled around the flag pole at the rear of the school under the pine trees, in an event that had links back to a school in Cheltenham, England.