The Saints Come to Moorabbin 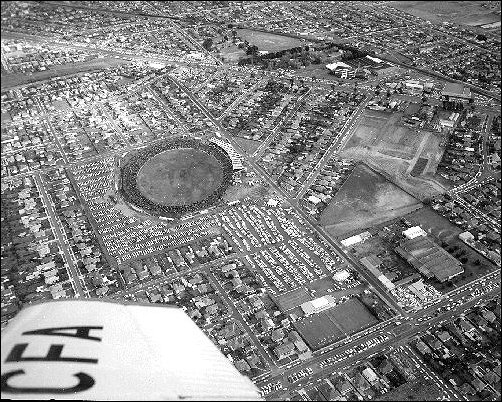 The Moorabbin News of March 26, 1964, announced to its readers that their Council had offered the St Kilda Football Club the Moorabbin Oval in Linton Street as its home ground. While final agreement had not been reached at that time, progress must have pleased many of the councillors for they had been trying to entice a League team to Moorabbin for more than a year. The Fitzroy club had inspected the Linton Street ground as had the Richmond club but they failed to take up the Council’s offer. [1]

The expectation was that the Moorabbin Football Club, the occupier of the Linton Street oval and the winner of a Victorian Football Association premiership flag the previous year, would amalgamate with the Saints. The new team would be known as the St Kilda – Moorabbin Football Club for ten years, after which time the St Kilda part of the title would be dropped. Cr Don Bricker, the president of the Moorabbin club was cautiously optimistic about the new developments but many Moorabbin members feared that their club would lose its identity. In fact, the naming provision was later dropped as the St Kilda constitution expressly prohibited a club name change without gaining the agreement of three quarters of its membership, an impossible target.

The reaction to the announcement by the Victorian Football Association was to suspend the Moorabbin Club on charges of disloyalty and as a result the Moorabbin Club gave restricted clearances to its players to join a variety of other clubs, including VFA teams, for 1965. Nevertheless, the 1964 season was a triumph for Moorabbin as it won the premiership flag for the first division.

The St Kilda Football Club had played for years at the Junction Oval managed by the St Kilda Cricket Club but had become dissatisfied with the financial arrangements and the inadequate facilities available to them. The Moorabbin Council proposal gave them a long term lease on the Linton Street ground, a new grandstand, two sewered toilet blocks, a graded car park, earth embankments and retaining walls, and concrete edges to terracing.

In July 1964 the Mayor, Bryan Stuart-Jones, Cr Les Coates, the Town Clerk Vic Smith, and Graham Huggins and Ian Drake representing the St Kilda Football Club, signed the agreement between the Council and the Club. The agreement gave the Saints a seventy five year lease over the 23 acres 2 roods and 30 perches that constituted the Moorabbin ground, and a commitment from the Council to spend £100,000 on ground improvements. The money was to be raised by a loan repayable over 45 years. [2] 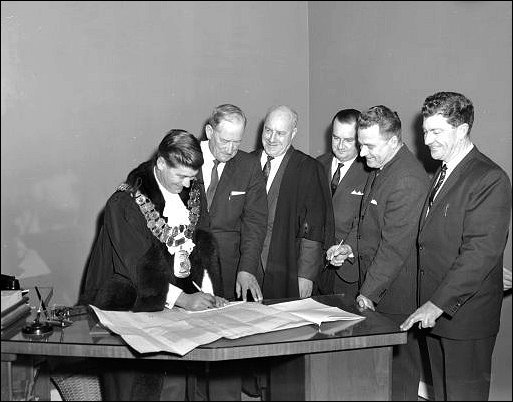 The rate payers of the municipality were assured by Council that the St Kilda venture would not cost them a penny. In fact, Cr Ken Hodgson predicted the scheme would ultimately show a profit for the City, as they would receive an annual rent of £5000 and save the £3000 it spent at that time on ground maintenance. This income he believed would more than match the principal and interest payments on the £100,000 loan. [3]

In addition to the Council investment, the St Kilda football club undertook to improve buildings to the value of £275,000 with a minimum expenditure of £140,000 in the first five years, together with £120,000 on a social club. In total the city’s assets would be enhanced by £500,000, Cr Hodgson claimed. [4] Cr Coates agreed, reportedly saying , “Financially we’ll come out of this pretty well”. Cr Stevens thought the arrangement had met with ratepayer approval, as the councillors had not received one complaint. 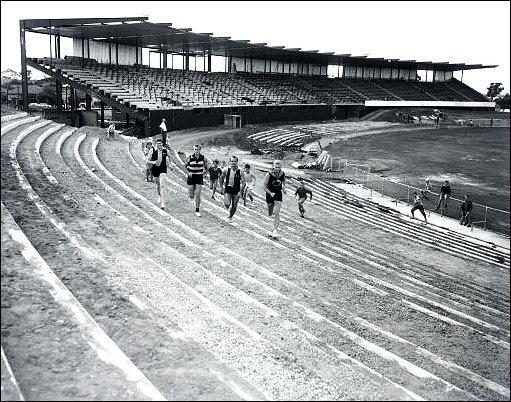 Mr Griffin, a resident of Moorabbin, was not convinced by the councillors’ analysis of the financial situation, nor was he impressed by the lack of complaints, as according to him the whole matter had been shrouded in mystery, with details of the lease being kept secret. He pointed out that when in the future the buildings passed to council control they might have no value at all due to obsolescence and depreciation. He observed that no mention had been made of additional costs that would be incurred by Council in road maintenance, street cleaning, traffic signs and the inconvenience caused to residents living in the vicinity of the ground. [5]

Despite the concerns of Mr Griffin, the disappointment of many members of the Moorabbin Football Club, and the outrage of some St Kilda members, the deal held with the first Victorian Football League match on the Linton Street oval being played between St Kilda and Collingwood on April 17, 1965 before a crowd of 51,370. [6] Many of these spectators were witnessing a League match for the first time. Newspaper reports described the match as having “all the action, drama, thrills, excitement, and atmosphere of a Grand Final,” with the crowd “roaring itself hoarse as the lead see-sawed after half time.” [7] The Saints defeated Collingwood by six points. The newspaper reporter believed it was doubtful if the Saints had ever reached such a high peak in their 93 year history, and more significantly, he saw it as “only the start!”. [8]

St Kilda had won ten and lost eight games in the 1964 season, prior to coming to Moorabbin, but the view was the club had the talented players and the potential to achieve a premiership in 1965. At the start of the ‘65 season the team showed great promise, winning its early matches under the under the strong leadership of Darrel Baldock as captain, with Verdun Howell rated as the best full-back since Jack Regan’s time at Collingwood, John Bingley a new recruit from Devonport playing as Centre half-back , Ian Stewart infatiable and courageous in the centre, Alan Morrow in the ruck and the tall ‘blond bombshell’ Carl Ditterich beginning to make his presence felt. 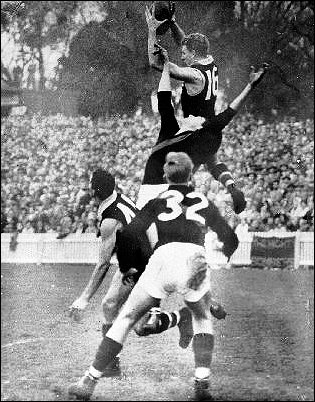 The 1965 season was a triumph for St Kilda as it won fifteen matches, the largest number it had ever won in a season, and it played in a grand final for the first time in 52 years. Nonetheless, many supporters were disappointed at the failure to win the coveted flag and they offered many excuses. Alan Schwab, the public relations officer of the St Kilda Football Club and Standard News reporter, summarised the reason for the defeat simply as, “They weren’t good enough”. He wrote, “St Kilda lost because it lacked the height to compete in the air with the tall Essendon players and it was outpaced when the ball hit the ground.” [9] But he believed the team had learnt from the defeat and would go forward confidently into the next season with a burning desire to win the title.

Schwab was right! In 1966 the struggling Saints pulled off the ultimate prize in Australian football by defeating Collingwood in the grand final by one point. Feldmann & Holmesby in their history of the club record, “Disbelief was the first feeling which gave way to joy as men and women, young and old, wept unashamedly and complete strangers embraced.” Allan Jeans, the St Kilda coach, told his players, “Whatever you do, wherever you go, I’ll remember you for this wonderful moment you gave me today.”[10] The Moorabbin News with a headline on the front page, “Saints Bring Home First Flag” commented , “If the club continues for 70 more years there will never be another day to match it.” [11] That night Sir Thomas Bent’s statue on Nepean Highway was decked out in the St Kilda colours. No doubt Tommy, a former Premier of the State but a man who had a strong commitment to the district, would have been very pleased about the success of the ‘local’ team. 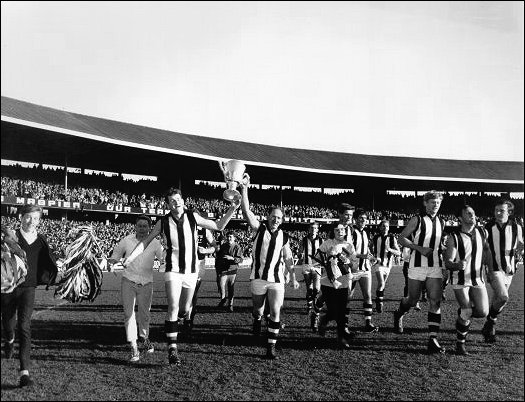 Wearing Collingwood jumpers, members of the St Kilda team hold high the Premiership Cup after winning the Grand Final at the MCG. Courtesy The Age.

Following the Saints’ great success in the 1966 finals, the Moorabbin Council decided to make a further $100,000 available to the club, but this was not without controversy. Five of the councillors voted against the proposal and Cr Stevens moved to have the decision rescinded. Stevens pointed out that this additional loan would take the total amount that the Moorabbin Council guaranteed to keep St Kilda on the Moorabbin Reserve to half a million dollars. During the course of the debate Cr Bricker summarised the council’s financial dealings with the club. Council had advanced $250,000 for ground improvements and received repayments of $10,000 annually on the 75 year lease. It had also lent $100,000 to the club for fifteen years with payments of $10,400 coming back over fifteen years. Finally a $60,000 loan of forty years duration brought repayments of $4,010 per year. [12]

Councillors speaking in favour of the new loan argued it was not a burden on the ratepayers as it was simply a matter of lending money and getting it back with interest. Cr Hodgson pointed out that this arrangement was the same as that entered into with the Bentleigh, McKinnon and Cheltenham Youth Centres. Those in opposition to the loan reminded their colleagues that the club had failed to include Moorabbin in its name and had not appointed a representative of the council to their board. [13] The questions were also raised, “What would happen if St Kilda defaulted on the loan?” and “Was this gambling with ratepayers money?” [14]

Following a lengthy, two hour debate on Cr Stevens’s motion to rescind the previous decision to provide a loan of $100,000, the motion was lost. Five councillors were in favour of the motion and against further loans to the St Kilda club – Crs Gleeson, Ross, Stevens, Blackburn and Fry. Seven councillors were in favour of the loan to the club and therefore against Stevens motion. They were Crs Coates, Alvin, Basterfield, Bricker, Le Page, Hodgson and Butler (mayor). [15]

By the end of 1966 St Kilda membership had reached 11,500, an all time high. The strong following of local people confirmed in the minds of the councillors, who had brought the Saints to Moorabbin, that their judgement was sound. Little did they know that the original arrangement would not last. In 1993 the Saints home ground became Waverley Park and seven years later they moved to Colonial Stadium while retaining the Linton ground as the administrative headquarters, practice ground and social club. Nevertheless there are many local people who continued to regard the Saints as their club and support it vigorously despite the fact it has not achieved the glorious heights of the 1960s. 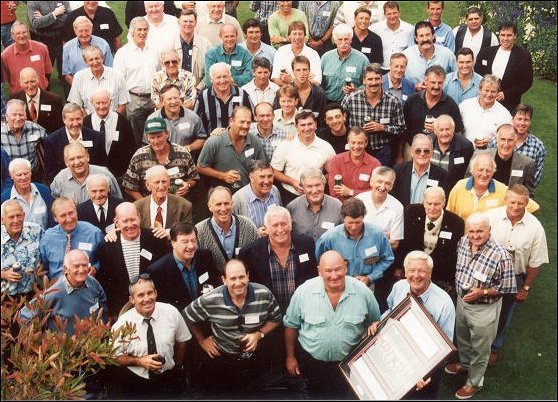 Past players of the St Kilda Football Club at a reunion at the home of Lindsay Fox, 1997. Courtesy Leader Collection.