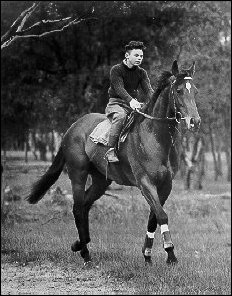 Shirley Morgan , the daughter of Ernest Willmott a racehorse trainer, reflects on the life of apprentice jockeys at Braeside in the 1940s. [1] "By today’s standards the life of an apprentice jockey was pretty hard. They were up in the morning about four o’clock or four thirty. They would have a cup of tea and a slice of bread and jam and then muck out the horse boxes and get the horses ready. Each of them would be in charge of certain horses and they took them down to the track and rode them slow work or fast work. They might canter them around a couple of times. They would then bring them back, feed and water them or whatever before they had their breakfast. This would be about nine o’clock. They would have porridge, toast and an egg for breakfast cooked by my mother. As they lived on the property they would then dress the horses and sweep around and clean the place up. It was a very busy life. There was plenty to do with thirty horses particularly when they were race horses. Each boy would have two or three horses to look after."

"The boys were about fourteen or fifteen years old. Usually straight from school. But some of the boys came from the courts. Dad had friends who were judges. They’d ring up and ask if he could help out with a couple of lads. Some of them would steal the eye out of a needle but most had been hard done by. They only had what they stood up in and never had anything to eat other than fish and chips or pies. My mother used to make roast dinners, casseroles, steam puddings, baked rice custard, old fashioned type of food. Because the boys would have to take the horses to the races Mum would take them into Mentone and deck them out in suits, shoes, shirts and underwear so they were properly dressed to go to Caulfield, Flemington or wherever the horses were racing."

"Usually the boys stayed for two years. Some stayed longer until they got their licence to ride. Some stayed after they got their licence and they would ride our horses or get rides somewhere else. If they were any good they would move on. A lot of them got too heavy so they gave it away. They became strappers or moved on to something else. Not everyone made the top ranks by any stretch of imagination. There were a few that made it in the bush."

"We used to have a bit of trouble with the boys that Dad got from the courts. There was a little shop at Braeside, down the corner on Boundary Road. They used to deliver the papers. It was a sort of mixed business. One of the boys used to ride a bike down there and pinch the lemonade. Dad told him that he would knock his head off his shoulders if he did it again."

Shirley tells the story of one of the older boys, a strapper, having money stolen from his pocket by one of the boys from the court. "He had been given the money by the owner of one of the horses he cared for - it had come third in the Caulfield Cup. He knew the boy who took his money and demanded it back but the offender would not admit to his crime. They put a rope around him and dangled him up and down in one of the underground tanks by the stables." Shirley commented, "If the rope had broken we would have lost the kid!"

"One Saturday Dad and Mum were at the races and one of the boys left the front gate open and a horse got away into Lower Dandenong Road. We were out there trying to catch it. I was in the middle of the road stopping the traffic when who should turn up but Mum and Dad. We got the rounds of the kitchen. Dad said, ‘That horse is worth more than your life’. Thank goodness the horse didn’t get hurt."

"Dad was very strict with the boys. Rarely did they misbehave. I think they were frightened of Dad. They were only allowed out one night a week. Usually they would go to the pictures at Mordialloc or Dandenong. There was a bus that ran from Mordialloc to Dandenong. Sometimes they would come home by taxi. They would very rarely go out during the week because there were races on."

"We had parties at Braeside. The party would filter down from the top lounge down into the dining room and into the big breakfast room which had a great big table. The carpet square would be rolled up and they’d put on the gramophone or they’d have someone playing the squeeze box and some of the jockeys would jitterbug on the top of the table. They were fantastic dancers. It was a good time." 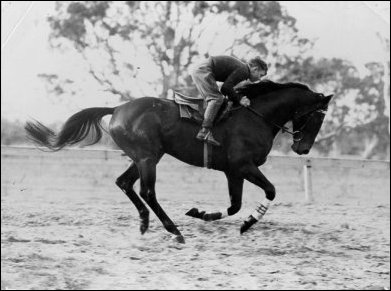