Story Behind the Photographs

The Moorabbin Historical Society photographic collection contains two old photographs of people living in the early twentieth century. [1]. One is labelled St Matthew’s 10 mile Walking Race, Competitors 1904. The second photograph taken beside St Matthew’s, Church of England, Cheltenham, includes some of the same people. In both photographs a poster is being displayed in the background drawing attention to “An Entertainment to be held in the Mechanics’ Institute, at Cheltenham, on August 26, 1903.” Described as a Minstrel Entertainment of music and mirth, with an admission charge of one shilling per person, a feature which did not deter sales as on the night the hall was packed with every seat being occupied as well as chairs placed in the aisles. [2] The report in the Brighton Southern Cross indicates the proceeds of the event were for the benefit of the Moorabbin Brass Band. The same report described the highlights of the evening’s program, and the people who provided it. [3] 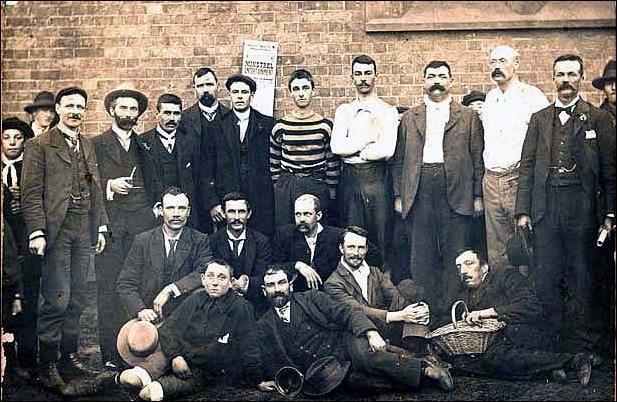 When minstrel shows first began in the United States of America in the 1840s the entertainers were whites with blackened faces impersonating Afro Americans. It was in 1846 that E P Christy organised the Christy Minstrels and adopted a three part formate for the show. During the first part the whole company sat in a semi circle on the stage with the master of ceremonies in the middle. He was called Mr Interlocutor. Two other key performers sat at the extremities of the semi circle exchanging smart comments and jokes. They were called Mr Bones and Mr Tambo. The second phase of the show consisted of comedy routines, sentimental songs and dances. This was followed by the final item which consisted of a one act skit. [4] It was this three part formate that was followed by the Minstrel Entertainment at Cheltenham, but it is not known whether the cast blackened their faces.

The first part of the programme was supplied by an improvised minstrel troupe from among the bandsmen and their friends. A newspaper report noted that Mr E C Rippon was interlocutor, and Messrs. Stan Cullin and Gosling (Tambos) and Clarry Judd and Will Sherwood (Bones) were on the corners. This part of the programme was apparently particularly lively and was enthusiastically received by the audience. Songs, with rousing choruses by the company drew animated responses from those present. Between these numbers the cornermen kept the audience in shrieks of laughter and local gags and hits. [5]. Songs included ‘Kentucky’, ‘Does Pigdey love Dovey’, ‘Who’s Dat a Callin’, ‘Hear Dem Bells’, ‘Going back to Dixie’, and ‘Polley Wolley Doodle’ according to the Moorabbin News report. [6]

After an interval the second part of the program commenced with the band, under the direction of Bandmaster Short, playing a selection of Scotch airs. Three songs sung by different artists followed this item; ‘When the Heart is Young’, ‘Queen of Angels’ and ‘The Skipper’.

The third part of the program was the skit entitled, ‘The Deadly Football’. The Brighton Southern Cross report described it as “An absurdity, described as laughable, but really more painful than laughable, owing to lack of rehearsal.” The character, Mr Barcello, a footballer out of work, schemed to ‘con’ his mates with a football labelled ‘dynamite’. His boast was he could kick a football further than any member of the group and he was prepared to back up his claim with money. Several men took up his challenge and put up their money to cover the bet, however on reading the label on the football promptly decided not to proceed, and consequently lost their money. Such was not the case with ‘Tommy Tired-out’. He couldn’t read so the label did not deter him from taking his kick. He put his foot to the ball and won all the Mr Barcello’s ill-gotten gains. [7] 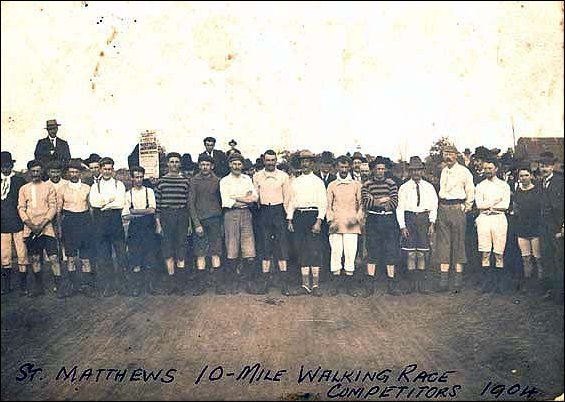 It was prior to the Scotch Airs and the ‘Absurdity’ and during the interval that the Shire President, Cr Barnett presented the prizes won in the walking race shown in the second photograph. How the event was linked to St Matthew’s Church and the Moorabbin Band is not clear. Perhaps it was part of the fund rasing activity for the Band.

According to a newspaper report, the race commenced at the mile post in front of St Matthew’s Church, continued along Point Nepean Road to the mile post near the Highett State School returning along Point Nepean Road to Balcombe Road, Mentone before repeating the journey to Highett then turning to finish at the starting point. [8] Councillor F T Le Page, the President of the Shire, was the starter, E W Proudman the time keeper, and Messrs Fairlam, Hargreaves and Cr Le Page acted as referees, while H Erwin was the judge. Initially twenty nine competitors nominated to race but several withdrew prior to the start.

Of the thirteen competitors to complete the ten mile race J T Matthews was last across the finishing line taking two hours ten minutes and forty three seconds, although still within the set time limits. He was unperturbed by the cheers of the crowd and the barracking of the swarm of urchins gathered at the finishing point. A tall man weighing 18 stone he strode along at a steady pace, with a firm and even tread throughout the race. Matthews was beaten to the finish by A Deucher, a thirteen year old boy, the youngest competitor, who completed the course in one hour fifty minutes and twelve seconds. The winner of the event was nineteen-year-old William Adams who lived in Charman Road, Cheltenham and known as the champion follower of the Cheltenham Football Club. His time was one hour thirty-three minutes, forty seconds for the ten miles. [9]

For his success William Adams won a gold locket; C Judd received a silver-mounted umbrella for second place; S Reynolds took the gold medal for the fastest time unplaced; G Coleman also received a gold medal but in his case it was a winner of the sealed handicap. The final prize was a consolation one awarded to J T Matthews. [10]