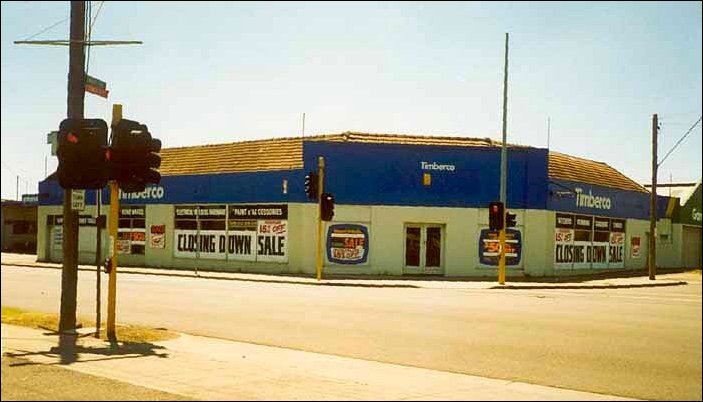 Timberco Hardware Store on the site of the garage where the hold up took place. More recently the location of Le Gym. Courtesy Mordialloc and District Historical Society.

The Honourable Justice Wasley of the Victorian Supreme Court announced that men, including foreigners, who commit armed robbery and are convicted will receive severe punishment. He was making this comment in relation to the case of Kenneth Evans and John Bailey who faced charges of armed robbery at Mentone on December 27, 1927. [1]

William Hind Newlands, a motor mechanic, was working at his brother’s garage, the Mentone Service Station, on the corner of Balcombe Road and Swanston Street. His brother, Reginald, and James Le Page were at the rear of the garage when Evans and Bailey arrived in a Dodge sedan car stolen from Little Collins Street in the City. All three workers were ordered to put their hands in the air by the two men wearing handkerchiefs covering their faces. Bailey fired a shot from a 32-calibre revolver with the bullet ricocheting off the glass and striking the framework of the window. [2]

After searching the three men and finding £2-10-0 in Reginald’s pocket, the robbers demanded that the safe be opened. William told them that he didn’t know the location of the key However, his brother gave them access to the till where the key to the safe was sitting. The safe was opened and its contents removed. With their illegal hoard of £9 Evans and Bailey quietly left, driving their stolen car to Malvern where they abandoned it to catch a taxi to the city.

Evans and Bailey first met on December 15, 1927 when they were both residing at the Sailors’ Home in West Melbourne. Evans claimed that Bailey invited him to join him in making some easy money. The plan was to hold up the employee bringing £1000 to pay the coal dumpers at Port Melbourne. Evans was to drive the car, but the plan did not go ahead. [3] Instead the pair went to the Hughesdale Railway station where they held up Stationmaster Albert Knapp, gaining £3 which they split fifty fifty. Evans admitted that he took a bag of coins from the station’s safe which he though were ‘two bobs’ but turned out to be ‘coppers’. Eight days later and two days after Christmas Day, the pair stole a car and drove to Mentone where they bailed up the proprietor and staff at the Mentone garage.

After being arrested by police, Evans and Bailey were brought before Justice Wasley charged with robbery under arms on two occasions; at Hughesdale and Mentone. Nineteen year old Evans pleaded guilty to both offences and gave evidence on behalf of the Crown against his partner in crime. Bailey, on the other hand, denied any involvement.

Conducting his own defence, Bailey agreed that he had met Evans and told him he was returning to the United States as soon as he could get a ship, but he had nothing to do with the hold-ups. The moneybag, cartridges and revolvers exhibited in the court, Bailey claimed, were never in his possession. [4] Despite his protestations the jury returned a verdict of guilty against him on both counts. Sentencing was deferred as Bailey raised doubts about his age. Evans was sentenced to imprisonment for twelve months and ordered detention in a reformatory prison during the Governor’s pleasure. [5]

Several days later the court was reconvened. Before Justice Wasley pronounced the sentence against Bailey, Constable Saker informed the court that Bailey had told him he was twenty four years of age. Edward Turner, senior warder at the gaol was told he was twenty two years of age. Bailey told the court that he would be 20 years old at his coming birthday when asked by Justice Wasley, “What is your right age?” Bailey explained that when he joined the army in the United States he put up his age by three years because recruits had to have reached a certain age. He was 16 or 17 at the time. He reported, “The recruiting officer knew my right age, and he told me that my age would have to be raised some.” Bailey remained in the army for three years after which time he was honourably discharged with papers showing his inflated age. [6]

Justice Wasley was not convinced and suggested to Bailey that he was claiming to be nineteen because he was aware that nineteen year old Evans was being sent to a reformatory. Bailey denied this. Nevertheless, Justice Wasley said, “I am satisfied you are much older than nineteen years,” and went on to sentence Bailey to five years imprisonment with hard labour for one offence with an additional two years for the second charge, making seven years altogether. Explaining his decision, Justice Wasley said Bailey had fired his revolver at least once, was convicted on the clearest of evidence, and had persuaded Evans to join him in the robberies. The years of imprisonment reflected the judge’s view of the gravity of the offences. [7]