Laying the Blame: The Typhoid Epidemic 1943

Headlines in the Moorabbin News.

Members of the Cheltenham and Moorabbin communities were worried, frightened and at least some were very angry. In 1943 typhoid fever struck more than four hundred people over a four months period. Before the epidemic was over twenty had died. The first two deaths were a girl of sixteen and a boy of fifteen. On March 27 the Argus described one victim as a mother with an eight week old baby plus two other children who had also caught the disease and a few days later noted one of the latest people to succumb to the scourge was a woman of eighty six years. This disease was non discriminating in that it attacked children, elderly men and pregnant women. No section of the community was spared. Who was to blame for this disaster?

The Moorabbin News (March 19, 1943) reported that the milk supply was suspect and that the Town Clerk had ordered a special flushing of the drains. In subsequent issues a series of articles entitled "What’s Wrong with Cheltenham" were published criticising the Manpower authorities who were "taking men for labouring work far afield who should be at home keeping the town clean. … the lane at the rear of Charman Road shops which is a disgrace. Trap doors to closets are missing - house drainage seeps through fences over the pitchers, and the smell on some days is almost over-powering."

Cheltenham’s plight was also attributed to deficiencies in Local Government with the author of the article wondering whether the interests of the district would be better served by becoming a fourth ward of the City of Mordialloc. Cheltenham was seen to have everything an ideal suburb should have in the way of natural advantages but it did not have those amenities that districts one quarter its age had, the writer claimed. So why did this situation exist?

The reporter wrote, "The only conclusion which one can come to is that down through its history the government of Cheltenham has been in the hands of market gardeners - good citizens, an indispensable section of the community, but a section not particularly interested in the laying down of modern footpaths, drains and roads, excepting where the latter serve market gardens. A section not greatly interested in the development of the shopping centre, not interested in the development of educational and cultural institutions, because a market gardener’s working hours preclude much time being given to outside affairs."

"For many years Cheltenham was represented in the Moorabbin Council by representatives of the market gardeners. Only in recent years was a man elected who was outside that influence. His advent resulted in a lot being achieved in the way of footpaths, drains, and roads, but only the surface has been scratched of what really awaits achievement." (Moorabbin News April 2, 1943) 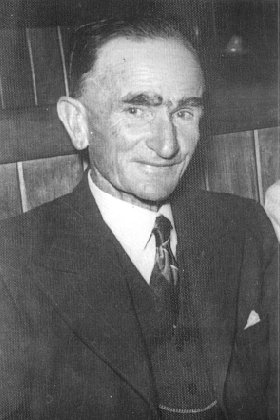 These strong words drew a firm and sharp response the following week from Everest Le Page a market gardener and councillor representing the Cheltenham ward on the Moorabbin Council. The Le Page family had long been residents in the district, with a tradition of service to communal and civic affairs. Everest’s father, Francis Thomas was a Moorabbin shire councillor for twenty five years, including a term as president. Everest himself served as a councillor of Moorabbin for twenty eight years, was mayor twice and was on numerous local committees. His letter to the Editor of the Moorabbin News on April 9, 1943 makes his position clear:

"In respect to vegetable growers not being interested in modern roads, footpaths and drains, I would like to point out that quite a number of them reside in the township, or own property there, and are just as much interested as anyone else in its advancement

In answer to your statement that vegetable growers are not interested in the educational and cultural institutions of the town (with a few exceptions), I would ask: is anyone else?

At a meeting held a fortnight ago to elect a school committee for a school of 500 children we were unable to get a sufficient attendance to elect a committee of seven. You might well ask "What’s wrong with Cheltenham?" but do not pick out the vegetable growers - they were represented.

You state that for years Cheltenham was represented in the Moorabbin council by market gardeners - quite correct, this was a vegetable growing district, and still is to a great extent.

As to your statement that only in recent years has a man outside market gardening influence been elected to the council, I would point out that as far back as 20 to 25 years ago. Cheltenham had representatives who were not vegetable growers, but possibly the writer of your article would not know this, as I remember your paper has changed hands many times.

In regard to what one councillor has done, you surely know that one councillor can do nothing by himself, and that no one person has a monopoly of brains. It is easy to criticise, but personally I respect and pay a tribute to the memory of the men, be they vegetable growers or others, who have given of their time, their talents, and their means, and who have rendered Cheltenham such splendid service through the years, and have passed on to higher service. To those still living I would say "Thank you" for what you have done in the interest of your district."

"Home Front" wrote to the Editor of the Moorabbin News, on 26th March ,

"As a resident of Cheltenham, who put forward many complaints of insanitary conditions and subsoil stench, which compelled us to sleep with closed windows at night ten years ago, and trying to rear a family (now fighting in Australia’s three Services) healthy, we feel somewhat indignant to be labelled as possible "carriers" of disease, because circumstances placed us in a certain district.

Surely something is radically wrong with such theory. There is no proof that anyone is a "carrier." It is most unjust to be slighted as a possible one. No one from any other suburb or city will really respect us again. We are experiencing such snubs.

Those of use who practise hygiene and good health laws, something of correct diet, balance, etc., and have managed to rear a family and keep well, in spite of surroundings conditions, find ourselves in a very unfavorable and unhappy position.

Realising how much sickness is caused through faulty living, and our ever varying climatic conditions, one wonders during a scare, how many cases are wrongly diagnosed!

I personally know where several of the patients have been sick for quite a period through uncongenial employment, working shifts in terrific heat and odours, and coming home in bitterly cold winds - hence feverish temperatures.

Pneumonia is a probably symptom that has sent quite a number that is not typhoid at all.

The milk error is evident - when some of us have used our milk unboiled all through.

We use the same milk that is supposed to have sent two patients from next door to us to Fairfield! Trusting something will be done to remove the stigma from good health folks."

Professor H Woodruff of Melbourne University was reported in the Argus of March 30 to be using bacteriological tests in search of a typhoid carrier. Reporting to the Health Commission he said that the evidence pointed very strongly to milk. The next day the Minister of Health, in the same newspaper, announced that a woman working on a dairy farm in Dandenong Shire, not far from Edithvale, was a carrier and may have been the cause of the epidemic but further tests were being carried out to see if there were other carriers in the district. 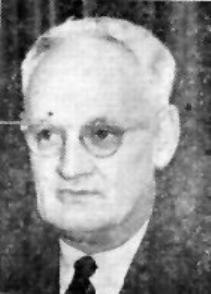 Dr. Bernard Hudson, a medical practitioner in Cheltenham who was praised for his work during the epidemic.

Two hundred and fifty residents of Cheltenham attended a meeting in the Mechanics Hall on Point Nepean Road on 13th April. State and Federal politicians were present together with local councillors. It was there that a "very old resident of Cheltenham" Mr Davie , moved that the sewage system be completed as a matter of urgency. He acknowledged that the root cause of the epidemic identified by the medical profession was contaminated milk but the conditions of Cheltenham at the time did not help. "Our drains and gutters were in a sadly neglected condition, overgrown with weeds, and house drainage lying stagnant. If sewage had been completed such conditions would not have existed."

Arthur Coles pointed out to the meeting that although council had applied to have the area served in 1928 work did not commence until 1938 because of an objection to the discharge of effluent into the bay. After Japan came into the war men were taken off the work for urgent defence jobs and it was not reasonable to expect an immediate resumption of the work. He said there were 992 houses in unsewered area which were not connected to mains that had been laid because of a shortage of plumbers and materials. Six hundred and thirty four houses were not served by a sewage main.

A correspondent in the same issue of the News pointed out that "Question of sewerage is not the vital point at the moment. It is the immediate question of infection. This is not the time for recriminations, but the system of drainage which prevailed and still prevails, requires immediate attention."

During a discussion at Council, the mayor, Alex Caldwell said everything possible had been done in the matter of hygiene. Disinfectants had been liberally supplied, drains swept and flushed and circulars had been issued advising householders how to cooperate in the interests of cleanliness and health. (Moorabbin News, April 22, 1943)

Later when advancing the case for compensation for typhoid victims it was said, "The malady was contracted not through any carelessness on their part, but through lack of adequate supervision by the Department of Agriculture. Men and women are now in their graves because of this failure of Government machinery." The Minister of Health, Mr Mackrell responded that the best he could offer was to provide petrol tickets for the transport of patients back to their homes. He said a number of families in distress were receiving ‘sustenance’. ( Moorabbin News, May 14, 1943)

The News of August 30, 1946 announced "Good news for Cheltenham". A contractor for the Metropolitan Board of Works had commenced the laying of sewerage mains in the Cheltenham Ward. Three miles of mains were to be laid, a task which was estimated to take twelve months. The advertisement columns in the same issue sought labours to carry out the work. It noted "Working conditions are good, with excellent wages, wet or dry."