One day in mid January 1902 brought a sensational episode that stirred the usually sedate atmosphere of Cheltenham. On the evening of the January 15, George Fagin, a local man of dubious reputation came home and threatened his wife with a gun. Terrified and fearing for her life, Jane Fagin ran for protection to the home of Mr Hickson on Point Nepean Road. Her husband, armed with a revolver, followed from their cottage in Pine Street, Cheltenham and forced his way into the Hickson home telling Mr Hickson to back off and mind his own business. Searching each room in turn he found his wife sheltering in the Hicksons’ bedroom. A scuffle followed with three shots being fired. One bullet entered Mrs Fagin’s abdomen causing severe bleeding. Shortly after George Fagin emerged from the room dishevelled with his shirt bespattered with blood. [1] 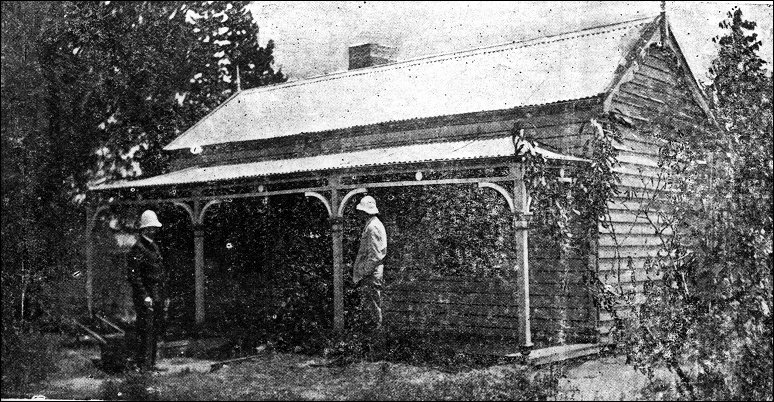 Two young men, King and Keys, found Jane Fagin whose appearance reflected the desperate struggle she had with her husband before the shots were fired. Both eyes were blackened, and repeated blows had bruised her arms and body. But these injuries were minor in comparison to the bullet wound to the abdomen. [2] Dr Scantlebury was called and attended to her wounds but directed that she be taken to the Alfred Hospital. A van was procured and Constable McCarthy drove her to the hospital. On the journey Mrs Fagin said she didn’t know the reason for her husband’s attack, except that he had been in a bad mood all day. She said he wanted to borrow money which she had refused to lend. [3]

The examination conducted by doctors at the Alfred Hospital exposed the extent of Jane Fagin’s injuries. Her skull was fractured above the left eyebrow, with a small piece of steel embedded in the wound caused by a blunt instrument. [4]. An operation on her abdomen revealed that a bullet had perforated the intestines and lodged in the back. A dirty piece of dress material caught in the track of the bullet in the abdomen set up an infection in the abdominal wall. This together with Mrs Fagin’s delirious efforts to get out of bed causing the rupture of the stitches in the abdominal wall, led to her death. [5] The jury at the coronial inquiry found that “Mrs Fagin had died from septic peritonitis, the result of a gunshot wound inflicted by George Fagin on the evening of January 15, 1902 and that Fagin was guilty of wilful murder.” [6] The police interred the body in a pauper’s grave after George Fagin’s brother and Jane’s family treated the matter of burial with the “utmost indifference”.

At the time of the murder, when Constable McCarthy was called to the Hicksons’ house, George Fagin came out banishing the revolver and ordered McCarthy to step back while he returned to his own house to change his shirt. [7] On arrival “Fagin snatched up and burnt a letter that was on the kitchen table remarking as he did so ‘That settles that evidence’ or words to that effect.” [8] He then, according to the Brighton Southern Cross report, “With the utmost coolness and a display of forethought he went round the house, trying the windows and locking the doors, and finally he took a tin of corn and went into the yard and fed the fowls. He went through the performance methodically whistling to himself.” [9] On completing these tasks he informed Constable McCarthy that he was ready to leave. 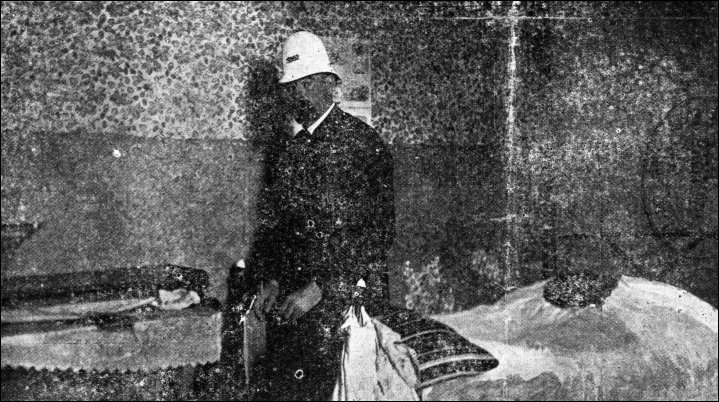 Room in Hickson’s House where the crime was committed. Courtesy State Library of Victoria.

When departing from the house he met his eight-year-old son, Freddie, returning from the beach and told him to go and stay with the Beazleys who conducted a butcher’s shop in Cheltenham. As Fagin and the police constable moved towards the Cheltenham Watchhouse, Fagin said he was dry and invited McCarthy to join him at the pub for a drink. The constable declined but asked Fagin what had he done to his wife. He replied in a nonchalant manner, “Oh nothing.” [10]

George Fagin was from a highly respected Ballarat family named Sebo consisting of eight brothers and one sister. George was seen as the ‘black sheep’ of the family and was given the nickname of ‘Fagin the Jew’ because whenever he was selling meat or playing cards he always tried to cheat. [11] According to the Moorabbin News report he had a general tendency to take people down. Apparently he liked the sobriquet, for when he arrived in Melbourne he took the name as his own. [12]

At thirty seven year of age George Fagin was a physically strong man, 5 feet 11 inches in height, weighing 15 stone. A slaughterman by occupation he at one time was in a comfortable financial position operating his own butcher shop. While living in Cheltenham he occasionally did some killing for H Beazley, a local butcher but generally he was known as someone who did little work spending much of his time loafing about public houses. The common view was that whatever he earned was spent on liquor.

Mrs Fagin, in contrast to her husband, was described as industrious, a woman providing for herself, her husband and child. She acted as a charwoman to various families in the district and often took charge of the cloakroom at public functions. On the day of the shooting she had been working at Mrs Smith’s place in Church Street, Cheltenham. She also worked at the local racecourses and was sometimes employed at the Grand Hotel in Mordialloc.

From police inquiries it was discovered that the mysterious letter card that George Fagin burnt before his arrest had been sent to Jane Fagin at the Grand Hotel. From there it was re-addressed by Miss Hunter to Jane Fagin’s home in Pine Street, Cheltenham. The mail contractor delivering the letter card observed to George Fagin that the mail was for his wife but Fagin brushed this comment away saying, “It is all the same, give it to me.” [13]

On the morning after the shooting and the destruction of the letter card, George Fagin was taken before Henry Comport JP, in the magistrate’s room at the Cheltenham Court and formally charged with wounding his wife with intent to murder her. Earlier when taken from his cell he asked the constable “How are things this morning?” When asked his response to the charges he said, “Nothing” and indicated he had no objection to being remanded for seven days.

During the time Fagin was being conveyed to the city on the 12.31 p.m. train he chatted quietly on various topics. Occasionally, the Brighton Southern Cross report said, he smiled like a man whose mind was free from trouble. [14] Both local newspapers commented on the contemptuous demeanour of George Fagin at the coronial inquest. The Moorabbin News reporter wrote, “During the evidence , he frequently gave an insolent smile to some of the statements of the witnesses, and while the jury were considering their verdict, the prisoner chatted cheerfully with his solicitors.” [15] The Brighton Southern Cross noted that Fagin appeared to be unconcerned throughout the proceedings and frequently found things to amuse him when the circumstances surrounding his wife receiving fatal injuries at Hickson’s house were recounted. [16] The outcome of the coronial inquest was that George Fagin was committed for trial at the Victorian Supreme Court.

On the last day of February George Fagin appeared before Mr Justice A’Beckett in the criminal court. It was there that James Hawkins, a groom, was presented as a witness. He indicated he knew Jane Fagin when she was employed at the Mordialloc Coffee Palace and that he had written her a letter and sent it to that address on January 13, 1902. This was the letter that George Fagin had burnt prior to his arrest. The contents of the letter, as far as James Hawkins could remember was as follows:-

Dear Jenny – I received your letter today. I do not know whether you meant me to meet you last night or to-night. I will go down and see you if you are there. If I do not see you to-night, catch the half-past eight train from Mordialloc, and I will be at the train when it arrives. – J Hawkins [17]

Under questioning by George Fagin’s lawyer, Hawkins agreed he had been “improperly intimate with the deceased.” The lawyer went on to tell the jury that the attack made by George Fagin on his wife “was not one with malice aforethought, but was the result of the rage into which he was thrown by the discovery of his wife’s misconduct.”[18] In a written statement Fagin claimed he had no intention of shooting his wife at any time.

The jury adjourned for three hours and ten minutes before reaching their verdict. Their conclusion was George Fagin was guilty of murder but they strongly recommended mercy on account of the great provocation he had received. This was followed by the judge pronouncing the sentence of death in the traditional form.