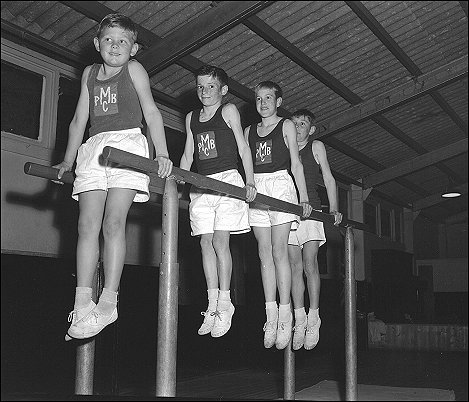 Led by Senior Constable LaurieTaylor in 1952, several residents of Mentone believed there was a need to establish a boys’ club and worked hard to see it eventuate. But it was not easy. While the enthusiasm of the boys seemed clear, the active support of parents was more difficult to marshal and coordinate. In addition to enrolling boys and finding instructors, suitable accommodation and equipment had to be found.

The Mayor of Mordialloc, Cr Thomson, gave the proposal his ‘whole hearted support’, seeing the club as providing for the physical and moral development of boys. “If you have a healthy body, you must have a clean mind,” he said. Acknowledging, in October 1952, that the plans were very embryonic Constable Taylor stressed such a club was an invaluable asset to the community. The club would be a means of ‘rooting out vandalism’ while providing opportunities for young lads to develop civic responsibility. [1] The club would provide educational, sporting, handcraft and physical facilities.

A public meeting in the Mentone City Hall was held on December 1, 1952 where the objectives of the club were explained and office bearers nominated. It was on that occasion the club was born and given the title of the Mentone Police and Citizens’ Youth Club. First Constable Laurie Taylor was unanimously elected president with H Willis as secretary, W. May assistant secretary, W Edgar treasurer and Messrs Thomas Macalister, Eadie, Higgs, Bateman, Vance, Skinner and Poore, and Mesdames Watts, Cooper and McDonald as committee members. [2]

Pat Loftus, the Prosecuting Officer of the Children’s Court, was the guest speaker at the meeting. He spoke of his experiences in the court of boys saying they had nothing to do and ending up in the police court. He stressed that boys were being drawn from the home and assimilated into the outside environment where there were influences that were not always good. If these influences were taken away something appropriate had to replace them. The community must be made aware of this and do something about it. He warned that a Boys’ Club without a parent’s group was only half what it should be. [3]

By January 1953 negotiations were under way for access to a temporary club hall and a decision was made to have two sections in the club; junior up to 16 years and intermediate 16 to 21. A subscription for juniors was fixed at 2/6 per year with payment of 6d per club night. For those in the intermediate section the subscription was 4/- per year with 1/- per club night. For the older boys there was the opportunity to train as youth leaders or further their physical development by engaging in such sports as boxing, wrestling or weight-lifting; activities of lesser interest to the younger club members. [4] On February 2, 1953 sixty boys enrolled at the first meeting of the club held in the Mentone Life Saving Club and a fortnight later the membership had reached 150. [5]

With the increasing number of participants the committee was anxious to establish a permanent clubroom and improve their equipment resources, which at that time were limited. At the earlier public meeting the president had told the audience while a temporary club room was alright it was not as good as having something of your own. He saw no reason why they could not get a grant of land from the Council and with working bees build their own hall. [6]

In May of 1953 the committee saw the opportunity to purchase a pre-fabricated building measuring 25 feet by 109 feet from the State Electricity Commission of Victoria. [7] The building was at Clovely Dam where it had been used by the SEC in their works program. The committee were delighted with this find as they saw this building making a suitable clubroom while at the same time providing a venue for a possible pre-school centre during the day. Transporting the building to Mentone was not a problem as a 25-foot trailer was available through Young’s Transport Services but a major concern was the lack of a site on which to erect the building. It was not until August of that year that it was announced that a site had been found at the rear of the Coles Building in Como Parade West. [8]

With the arrival of the building members of the community with tradesman skills were urged to give some time to help in its erection. [9] Other members of the community were asked for money to defray the costs involved. [10] But the reconstruction on the Mentone site took time. The club relocated from the Mentone Life Saving Club to the Parkdale Oval for a short time but returned to the Life Saving club waiting for their new clubrooms to be completed. During this time the committee was forced to restrict membership. [11] It was on June 30, 1954 that the first night in the new clubrooms occurred. [12] 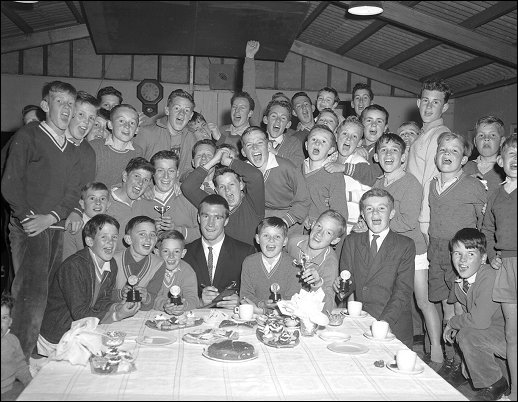 Footballers of the Mentone Police Club celebrate at a party with Alan Poore, a
Collingwood Football player and former captain of the club, 1961. Courtesy Leader Collection.

While the basic facilities were available the committee planned additions. They wanted to extend the building to include a library, craft room, shower rooms, supper room and kitchen. To achieve this goal they relied upon public subscriptions but in particular the work of the Citizens’ Boys Club Parents Sub-Committee and the Ladies’ Auxiliary. Weekly dances were held on Saturday and Sunday nights when Laurie Dare’s New Quintette Band provided non-stop music on a ‘brand new’ floor. [13] The O-So-Light Flour sponge and scone competition was another fund raising activity which contributed to the club’s desperate need for money. Within eight months £500 had been raised. [14]

There were individual members of the community who contributed generously to the building program. Amongst them were the local benefactors who stood as guarantors to a bank overdraft of £1000, the donor who paid for the 10x 30 hardwood floor, the man who gave a radio, and the Beaumaris man who presented £400

On November 27, 1954 Major General S H Porter, the Chief Commissioner of Police (elect), officially opened the club in the presence of the boys, their parents and other guests. As part of the celebration the boys presented displays of vaulting, boxing, wrestling and unarmed combat. At this time the contribution of their trainers was acknowledged; Norm Sangston, senior instructor; John Rhodes, vaulting and tumbling; Des North and Cyril Farrow, boxing; Sam Allica and Neville Ray, wrestling; George Herricks, unarmed combat; George Spunner and Terry Thompson, junior physical training, and Wal Playdell and Harold Villis, variety nights.

In addition to the physical activities, the club provided for the educational development of the boys with guest speakers and visits to other places. Councillor C Weir presented a talk on the Coronation ceremony and the meaning of the various historical and religious symbols. According to a newspaper report the meeting ended with the boys’ lustily singing of the National Anthem (God Save the Queen). [15] On another occasion one hundred and thirty boys attended a film program presented by the Atlantic Union Oil Company. The films views included a travelogue of Virginia USA, an Abbott and Costello feature, a wrestling short and a Tom and Jerry cartoon. Visits were organised to the Argus Newspaper and to the hosiery mill of Kayser at Richmond where the process of manufacture was explained. Some of the senior boys attended youth leadership training courses at the YMCA.

At the annual meeting of the club in August 1956 the retiring president, Laurie Taylor, announced that the loan from the bank had been repaid and the property was free of debt. The club was seen to be ‘virile’ having extinguished its debt twelve months early, having a strong program in place, a strong membership and an active committee. Sergeant Condon of the Mentone Police was elected president, W Rix, senior vice president, Constable Bob Bradley, W Serpless honorary treasurer, Lionel Doyle secretary and First Constable Hales as assistant secretary. The future looked bright.