Historically parts of what now constitute the City of Kingston were thriving centres of the horse racing industry. Thoroughbred horses were trained at Mentone, Mordialloc, Braeside and Aspendale, to compete against other horses at the Mentone, Epsom, Aspendale and other racecourses over a period of a hundred years or more.

Integral to the sport was the ability of individuals and groups to bet, risk or gamble money in order to win more by successfully ‘picking a winner’ or identify ‘place getters’ in a race. The bets were placed with an authorised bookmaker on the racecourse. However, there were people who could not get to the racecourse to place a bet but still wished to test their skill in picking winners and making money. This they did with ‘SP’ Bookies. The “Starting Price” Bookmakers conducted their business in hotels, back lanes and homes usually with lookouts or ‘cockies’ watching for the presence of the police for their activity was illegal. With sufficient warning they could remove the evidence of their activity and so avoid arrest, and prosecution at the local police court.

Valentine Wright of East Bentleigh played the role of a bookmaker in the film Phar Lap, 1983. Courtesy Leader Collection.

On June 20, 1931 police raided the home of Alfred Touse in Como Parade Mentone and arrested his brother William Arthur Touse, charging him with conducting a common gambling house. Both brothers appeared at the Cheltenham Court on July 1, 1931. Alfred was charged with permitting his brother to use the Como Parade premises unlawfully for betting.

Three police, on the basis of a warrant entered the Como Parade premises where they found William Touse sitting at a table on which were a number of betting slips. They identified themselves as police and told him they had information confirming that he had been accepting bets for about two years. This William denied although he did admit to carrying out the business for about three months. William, who pleaded guilty, was fined £40 with £3 costs. At the time of the raid £2-3s was found in the pocket of the accused by police and confiscated. The money William admitted was for bets.

While the police were in the house the telephone rang and Detective Cavanagh answered it. The caller wanted to place a bet on a horse but he was informed, “the bet wasn’t on!”

Unlike his brother, Alfred James Touse pleaded not guilty against the charges brought against him. Detective Cavanagh had gone to the Mordialloc Hotel to inform Alfred of his brother’s arrest and the fact that he would be charged with allowing his brother to bet on premises owned by him. Alfred was working in the bar and didn’t reply to the policeman’s accusation but when challenged with the statement, “He has been running this for some time and you knew it,” he replied, “You say so.” 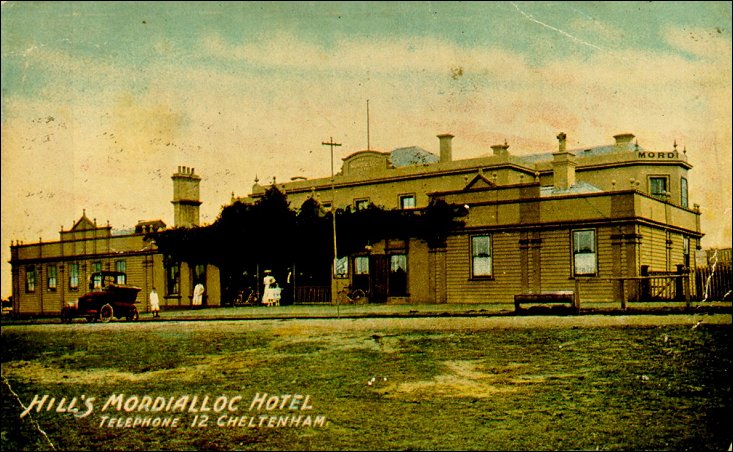 Alfred’s barrister argued that the police had not presented ‘positive evidence’ that his client knew that his house was being used as a betting premises. He was working at the Mordialloc Hotel when the police raided the house in Como Parade, and when confronted by them was not told of what they found. His response of “You say so” was interpreted as a sarcastic response. Given this situation he believed the Bench could only convict on the basis of suspicion or conjecture.

The case against Alfred was adjourned to the following month as the Bench was divided on the appropriate decision. However, before the Bench could reconvene the police withdrew the charges against Alfred. He was free.