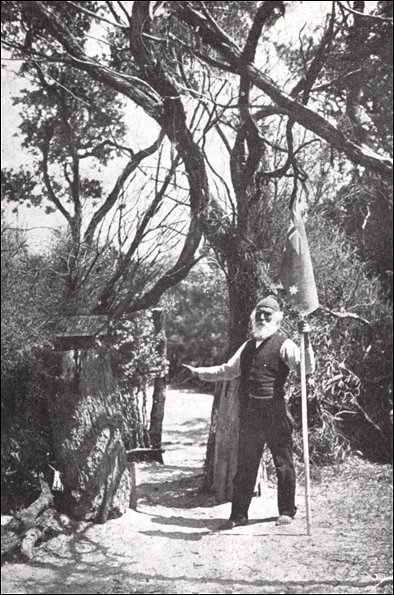 John Maddox at the entrance to his camp at Carrum. Courtesy Chelsea and District Historical Society.

It was only after John Maddox was admitted to the hospital suffering from a serious attack of dropsy that the local community learned his name. Prior to this, most residents of Carrum knew him as the ‘Hermit’ or ‘Captain’. John was very annoyed when he became aware that his name was revealed. He preferred the anonymity of ‘Hermit’

Because of his habit of quoting scripture he was seen by local people to be a religious man, and when asked whether he considered himself religious he replied, “Aye, I have tried to be. I’ve had my tribulations, and I know they have been visited on me for some good purpose by an all wise Providence.” He saw the fact that his name had been made public as an additional ‘tribulation’ he had to bear, but was disappointed that after eleven years as “The Hermit” people in Melbourne would be able to recall the name John Maddox. This was a situation he had striven hard to obliterate. He gave no reason why he wished this to be so except that he believed his humble life as a hermit was ‘ordained’.

His dwelling, located between Carrum and Frankston in what is now Seaford, was a small hut in which he slept in a bunk under a bark roof. The hut itself contained objects that suggested the Hermit had an earlier career as a sailor or at least a strong interest in the sea. There was a calendar, which only a seaman could interpret, and there were models of full-rigged ships made from various woods and cords. Each model had a Union Jack attached to its masthead. Amongst the ti-tree, surrounding the hut, were carefully laid out paths covered with shell and at the entrance to the property was the sign warning people, “Blasphemers not allowed in here.” The hermitage was decorated with many effective and original designs using shells as well as bottles covered with different coloured shells.

The Hermit’s Camp. Courtesy the Chelsea and District Historical Society.

John Maddox lived on the money he made from selling carvings of cuttle fish shells and the occasional odd job offered by local people. However, there were times when his survival was in doubt. On one occasion he was without food for nine days. The situation was saved when he sold some of his carvings in Frankston enabling him to buy some bread. He died in 1917 at South Melbourne, aged sixty with parents unknown according to his death certificate.

In 1918 the Chelsea Progressive Association wrote to both the Dandenong and Frankston Shire Councils in an effort to preserve the Hermitage but by March the property was reported to be in a bad condition. The Association suggested that a caretaker be appointed to protect it from further deterioration and by April the Frankston Council advised it would supervise the hermit’s camp. Despite this it is believed the property was destroyed by vandals.