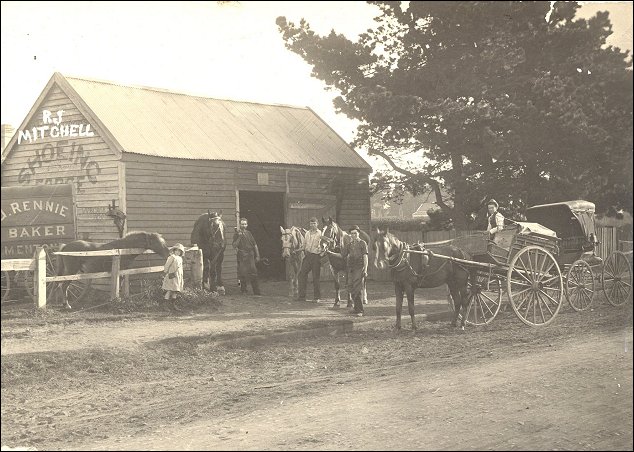 Blacksmith’s shop initially conducted by William Blackwood and later taken over by Mitchell during World War One, c1920. Courtesy of Mordialloc and District Historical Society.

The following notice appeared on a telegraph pole in Mentone in 1894 and also on the door of J T Brown’s blacksmith shop.

Louisa and William Blackwood were offended by the accusations implied in this notice and took the matter to court, alleging that James Brown and his wife Martha had committed libel and as a consequence the Blackwoods claimed £99 compensation.

Both William Blackwood and James Brown were blacksmiths at Mentone conducting independent businesses.

The court case was heard by Justice Casey in the County Court in Melbourne on November 29, 1894 with lawyer Woolf Fink appearing for the plaintiff and H Barrett representing the defendants.

Fink called several witnesses in an effort to show that Mrs Brown had written the defamatory comments about Mrs Blackwood. Alfred Judd told the court that he found the notice on a telegraph pole on August 22, removed it, and took it home to show his father. G S Walker confirmed that he saw the notice tacked on the door of the defendant’s shop on August 30, and after reading it commented about the ‘funny context’ to the proprietor who responded “Yes, they talk about taking some action against me.” Brown went on to say if they did so he would make it hot for them, using some colourful language which was noted in the newspaper report with dashes.

Having established the authenticity of the notice the lawyer called James Miller, an ironmonger of Mentone, who produced a receipt signed by Martha Brown which she had signed while was sitting in the shop sewing. She signed the receipt in his presence. In the court this receipt was passed to Edward Shaw, assistant manager of the Bank of Australasia, to compare with the offending handwritten notice. He asserted that a female wrote the notice and that the same person wrote both the notice and the receipt.

Louisa Blackwood was called as the next witness. She acknowledged that she knew the defendants and that James Brown was in the habit of calling out to her at every opportunity. During the past three months he had been using insulting expressions.

After Fink completed the presentation of the plaintiffs’ case the defence lawyer called James Brown to testify. Brown made it clear that he did not write either of the notices and recalled Walker drawing his attention to the one tacked to the door. He remembered the conversation, although his recollection of the actual words used was slightly different from that of Walker. Brown went on to assure the court that his wife did not write the notices and disputed Miller’s claim that Martha had signed the receipt. He suggested that McGuinness had in fact written the receipt.

After the lawyers on both sides of the case summed up their arguments the judge gave the verdict in favour of William and Martha Blackwood, awarding them £5 damages plus costs.

The story behind the notices “the champion liarship” remains a mystery. Why did it happen? What was the motivation for the notices? If the claim is true what caused James Brown to pass insulting expressions at Martha Blackwood whenever he saw her? What did Mrs Powell feel about being linked in a contest claiming to identify the champion liar of Mentone? Why was she selected? Was the whole matter linked to business rivalry? Who was McGuinness? Answers to these questions were not presented in the newspaper report of the day and the probability of finding them now, one hundred and nine years later, is low.