In 1899 Britain became involved in the South African campaign against the rebellious Boer settlers. Victoria, then a British colony, was expected to support the Mother Country. At that time there was little dissent from a very jingoistic attitude and much rhetoric flowed about how Australia as an outpost of British civilisation must go to the aid of Mother England. It was not long before a volunteer force of Victorian troops was in training at Langwarrin and by late April, 1900, they were ready to go overseas.

The contingent was a forerunner to later Light Horse Regiments who gained fame in the two world wars. They were known as the Victorian Imperial Bushmen's Regiment and the soldiers were referred to as troopers. When departure time came the men had to ride or walk their horses from the camp south of Frankston to the port of Melbourne where they were to embark for the Cape of Good Hope. It was felt that the trip up to Melbourne was too long for just one day so there was to be a one night stopover somewhere about half way. When this became known there was some jealous argument among the likely choices for this occasion. Mordialloc, Mentone and Cheltenham were all about the right distance from Melbourne and all offered their towns to the army as places for a rest. The defence authorities chose Mentone much to the disdain of its neighbours. The decision went Mentone's way because it had the large skating rink to billet troops and a number of racing stables to billet the horses as well. Mordialloc had the latter but no really big halls. Mentone also had the palatial Coffee Palace building, which had become Como House by 1900, as well as the Mentone Hotel, and these were thought suitable venues for the officers to spend the night in the comfort they were accustomed to.

Cheltenham was also passed over because its hall was too small, and a suggestion that the Mentone racecourse be used was put aside in favour of the comforts of the town. The owners of the Mentone Skating Rink tempered their patriotic fervour by agreeing to the visit only after two Moorabbin councillors guaranteed to pay for possible damage done to the building by the soldiers.

The preparations for the visit excited the Mentone residents and large decorative archways were built in Como Parade near Como House and in Mentone Parade near the skating rink. The arches read variously: WELCOME TO MENTONE; FOR QUEEN AND COUNTRY; and GOD SPEED OUR BOYS. The town was also decked out with flags on many of the buildings.

When the big day came it was something of a disappointment. The soldiers were due at about 4 p.m. but did not arrive until after dark. The Moorabbin News of April 28th reports that the troops watered the horses at Mordialloc in the late afternoon and reached Mentone at 7-30 p.m. This meant that they had to feed and water their mounts in the dark. To Mentone trainers' annoyance no feed had been sent by the Defence authorities and the sergeant-major had forgotten the lanterns.

There were 700 in the regiment and all had to be given an evening meal and bedding for the night. This would have stretched the resources of the small town considerably but, no doubt, many women volunteers answered the call and the patriotic mood would have swept them along with the excitement. They had to rise early the next day for the whole group was given breakfast before departure.

At the evening meal there were welcoming speeches by local people, in particular the Shire President, Councillor Penny. Patriotic rhetoric flowed and Trooper Germaine, the son of the Mentone Hotel licensee, was singled out for special mention as a member of the force. Colonel Kelly responded on behalf of the group and expressed his gratitude to the Mentone people.

A little later that evening there was a slightly less disciplined interlude because some of the troops went strolling around the town. The paper reported that they strolled with 'sisters and cousins' until late. It also said they seemed to be 'not under proper discipline, young and inexperienced.' At one stage Constable Canty was summoned by a visitor to Mentone, a Mr. Hogan, who claimed five soldiers fired a revolver somewhere in Mentone Parade and the shot grazed his clothing. They then disappeared into the scrub. There was a discussion between the policeman and the army officers after which it was agreed that the army would undertake an inquiry. Nothing further was heard of the incident. It seems to have been sheer luck that the man was not injured or killed and one wonders why the men had live ammunition in their weapons at that stage of their expedition. The press report goes on to say that there was doubt over the competence of the officers.

The next morning the Bushmen's Regiment rode out of town along Balcombe Road and up Charman Road to pass through Cheltenham. Most of Mentone's small population and that of Cheltenham turned out to cheer the men on their way. The men rode four abreast looking impressive with their slouch hats turned up on one side and a plume of feathers waving gently as they trotted off to war. This was a momentous occasion given the isolation of Melbourne from the hub of the Empire in England and the passionate desire of people to show they were loyal Britons ready to accept any challenge against enemies of the homeland. 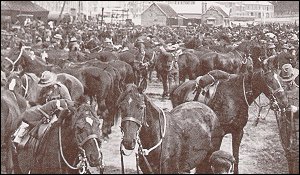 The troops received a much bigger farewell at Port Melbourne later on. When they reached the war zones in South Africa there were many reports in the Moorabbin News of their experiences over the next year or so. The local paper also reported the jubilation in the district and the celebrations a couple of weeks after the Bushmen's departure when the Relief of Mafeking news reached Melbourne.