Bloxsidge’s Hotel on the Mordialloc Creek, painting by William Tibbits.

Richard Goff Bloxsidge, a publican, councillor and sportsman, was a resident of Mordialloc for twenty one years and it was there that he died at his home in McDonald Street in 1889. He first came to the small village in 1868 with Elizabeth, his wife, to take up the licence of the Mordialloc Hotel but the couple had arrived in Melbourne fifteen years earlier in 1853.

Travelling on the Marco Polo from England where they were born and married, they joined a rapidly growing community in the colony of Port Phillip Bay. [1] It was the time of the gold rushes when the infant colony of Port Phillip was experiencing a dramatic increase in its population with people seeking to make their fortunes on the recently discovered goldfields.

Initially on arrival in Melbourne in 1853 Bloxsidge commenced in business as a horse dealer and breaker although he did visit the diggings for a short time and perhaps tried his luck at prospecting. For reasons unknown, probably lack of success, he returned to Melbourne and resumed his business before making a trip back to England. [2]

It was during 1853 that Richard Bloxsidge rode the horse Discount in the first advertised steeplechase run in Victoria and in that same year he rode in the first fox hunt in Victoria at Kilmore where he kept a pack of hounds. A Brighton Southern Cross report said that many people remembered the daring and dashing figure he cut on horseback when following the hounds. [3] It was in such an event, accompanied by Anthony Trollope the celebrated author, that his horse fell and he injured his spine causing considerable discomfort for the remainder of his life. It was believed that this injury was responsible for the paralysis that made him a permanent invalid for the final two years of his life.

When Richard Bloxsidge came to the Mordialloc Hotel he kept a small pack of beagle hounds which were used in hunting expeditions in the winter months. He was known to many acquaintances as “the Squire of Mordialloc”. While at the Mordialloc Hotel he enlarged the premises and acted as coach manager, supplying tickets for the coach run from Melbourne to Schnapper Point. [4]

When in 1871 the government threw the Carrum Swamp open to selection, Richard Bloxsidge was amongst many others who, keen to acquire land, applied for an allotment. He was successful, being granted Allotment 142. This land, today near Tarella Road Chelsea, was 192 acres 3 roods and 13 perches in area. On it he erected a two-roomed weatherboard cottage, 25 feet by 12 feet, with a brick chimney and veranda costing a total of £35, and commenced preparing twenty five acres for grazing and cultivation. As required under his grant he reported to the Commissioner of Lands in March 1874 that he had made improvements to the property including grubbing and clearing ten acres and erected two gates at the entrance. One thousand fence posts had been erected and joined with three strands of wire stretching one hundred and twenty five chains around the property. The total improvements made, he claimed, had cost £173-15-0. [5]

Eight months later Bloxsidge was again reporting his progress in developing the property on the Carrum Swamp. While he had been unable to fence the back portion of his property because of excess water he did have twelve acres under cultivation with six and a half acres planted with potatoes. He had invested £28-1-6 in stable manure but at the time of writing the potato crop was not sufficiently mature for harvesting so he was unsure whether his investment would be profitable. He pointed out that the dry land was not particularly useful for cultivation but he was hopeful that a living could be made once the good land at the back of the allotment was drained. On August 26, 1879 he applied for a Crown Grant indicating his desire to pay the difference between the amount of rent he had paid and the balance owing on the original cost of £1 per acre for the selection. This involved him in paying £48-5-0 plus some additional fees £1-14-1 to add to the his rent payment of £144-15-0, He claimed he wanted to do this because he “preferred freehold title.” [6]

Bloxsidge acknowledged that he and his family did not live on the Carrum Swamp property, as originally required in the conditions of the grant. However, he indicated he spent a considerable amount of time there with his men despite the fact that most of it was under water. His personal residence was the Bridge Hotel which was within 2 ½ miles of his selection.

Richard Bloxsidge and his family had moved from the Mordialloc Hotel to the Bridge Hotel in 1874. This hostelry, on the Mordialloc Creek, which was originally established by William Coleman, became the home of the Bloxsidge family until 1884. During this time the railway line to Mordialloc was formally opened for traffic by Thomas Bent, Minister of Railways and attended by Mr Bray, Premier of South Australia and Sir John O’Shanassy. After the speeches the official party adjourned to the Bridge Hotel for a banquet and toasts in a large marque organised by Bloxsidge. There were approximately two hundred people present, thirty of whom were members of parliament. [7] At the conclusion of the toasts, but not before Richard Boxsidge was praised for his hospitality, the company separated. Nevertheless, some people stayed at the invitation of Mrs Bloxsidge to dance and enjoy themselves into the early hours of the morning. [8]

For much of the time that Bloxsidge was the publican at Mordialloc he was also a member of the Shire Council of Moorabbin representing those ratepayers living in the southern riding of the Shire. He was first elected in August 1873 and remained in office until 1882. While a member he initiated or supported moves related to the creation of a cemetery at Mordialloc, improvements to the mouth of the creek, the creation of a recreation reserve and the appointment of an inspector of licensed houses and the prosecution of sly grog selling. [9]

Bloxsidge retired from the hotel business but continued to live in Mordialloc at his residence in McDonald Street known as Woodlands. It was there that he died on February 11, 1889 after spending several years as a permanent invalid. He was 74 years of age. His body was buried in the Cheltenham Pioneers’ Cemetery and a service was conducted by the Rev Alfred Caffin at St Nicholas’s Church of England in Mordialloc several days after the burial thus giving local people the opportunity to pay their respects to a man who had played a part in the development of their community. [10] 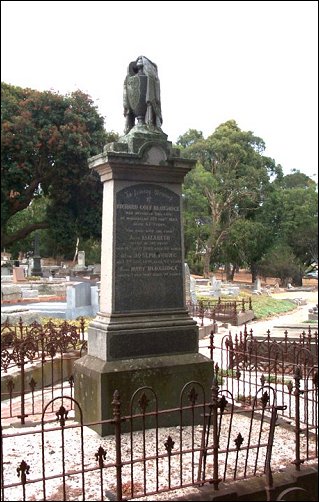