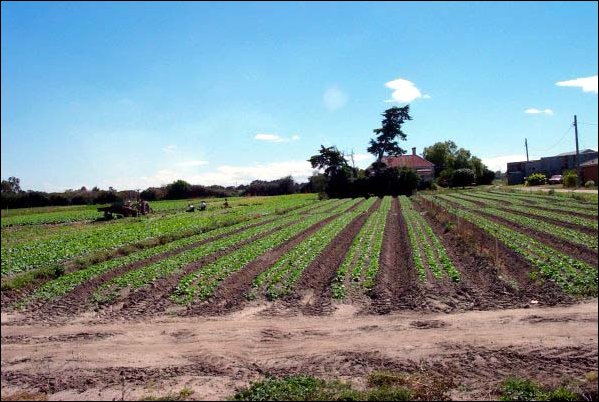 Early in the twentieth century water-melons were often grown by Heatherton market gardeners. The melon species did well on new rough ground that was being broken in after clearing. For this reason, and the fact that the fruit was popular with consumers in the summer season, the water-melon plants covered substantial parts of the new land being opened up for closer settlement in Heatherton a century ago.

Unfortunately the farmers at the time had to deal with thieves who raided their land and stole the succulent melons. Consequently, many market gardeners abandoned melon growing. One East Brighton grower of that time said, “If it wasn’t the outsiders who were causing the damage, it was the neighbour’s lads. The game is not worth a candle.”

The problem came to a head in 1907 when one Heatherton gardener decided to take action. Alexander Longmuir had three quarters of an acre of his Clarinda Road property planted with melon. He had a fine crop but it was constantly being raided. So with the assistance of his two sons and a labourer, W Brownfield, he set out to catch the culprits.
As a result of their vigilance in watching over the property four young men faced Cheltenham Court for stealing a water-melon valued at sixpence from Longmuir’s farm on 23rd March, 1907. Facing this charge were Reuben Buckley, John Potts, Albert Judd and H Gouldthorpe.

Alexander Longmuir told the court that it was not the value of the melon that mattered, he just wanted to stop the thieving. On the Sunday when the four accused were on his land Longmuir saw one of the accused pull up a melon and carry it twenty yards. Observing this action he announced his presence and whistled up his sons as the four accused bolted. However, they were not fast enough to escape. Longmuir caught Potts and a son caught the other three. They admitted taking a melon but when asked for their names gave fictitious responses. One suggested his name was ‘Whiskers’. Frustrated by their attitude Longmuir called the police.

Albert Judd at the court hearing denied withholding his name when questioned by Longmuir and claimed he was thirty yards away from the melon patch, although he agreed he has gone for a walk with the other three. His mate, John Potts, told the court that the three of them had agreed to get a water-melon but Judd did not go into the paddock. However, Judd made no objection when it was suggested they get a melon.

The magistrate while acknowledging the disagreement between Longmuir and Judd as to whether the boy was in the melon patch, noted that Judd was in the company of the other three lads and made no protest when the notion of the stealing of the melon was advanced. This meant, he said, in the eyes of the law they were acting in concert and therefore Judd was equally guilty. All four were fined ten shillings each, and each defendant was ordered to pay three shillings costs, and one and a half pence each, the value of the melon stolen.