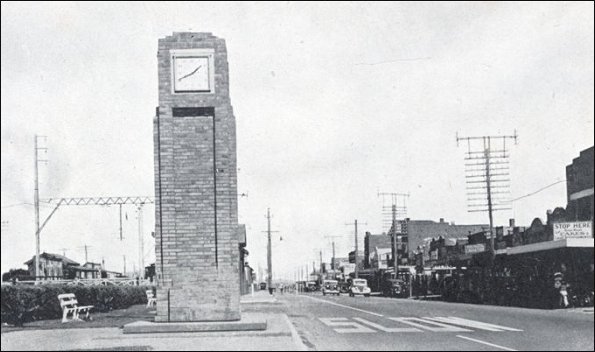 For seventy years a clock tower has been located on Nepean Highway by the railway line at Chelsea, informing local citizens and passing traffic the time of day. A gift from the Carrum Electric Supply Company this clock was erected as part of Chelsea’s contribution to the celebrations recognising one hundred years since the first European settlement in Victoria. The unveiling by Cr James took place on Saturday October 21, 1934.

As mayor, Cr James established the Centenary Celebrations Committee which suggested that the Carrum Electric Supply Company be approached to assist with illuminating the town. However the company wished to contribute something of a more permanent nature and instead offered to donate a clock with a two foot square face, as well as two mirror signs at centres north and south of Chelsea. [1] The offer was enthusiastically and quickly accepted by Council who indicated their willingness to pay the annual cost of electricity estimated at £20 for these gifts to operate. In addition, the Council instructed the city engineer and town clerk, Mr A. S Collings, to design an ornamental pylon to hold the donated clock. [2]

The Aspendale, Chelsea and Carrum Electricity Supply Company, later known as the Carrum Electricity Supply Company, was established in 1915 and continued to trade until 1944 when it was taken over by the State Electricity Commission. Initially the company’s goal was to see the replacement of kerosene lamps, candles and acetylene plants that were used by residents in the district. However, at first, because the capacity of the generating plant was limited, the use of electricity was restricted to certain hours. This resulted in many dissatisfied customers, particularly those who were early risers and had to continue with the use of candles and other sources of light. [3] So over the years the company worked to win the approval of their customers by being good corporate citizens.

At the unveiling of the clock, Mr Funston, the chairman of the Board of the Carrum Electricity Supply Company, expressed the hope that the gift would be of permanent benefit to the people as an accurate time recorder as well as an ornament to Chelsea. [4]. The mayor, Cr Meier, saw the clock as the first of many permanent improvements to the city while Frank Groves MLA welcomed the unveiling of ‘the splendid gift’ as a sign of the district’s progress as he could recall ‘the time when boats were more needed than clocks’.

Mr N S Strachan the manager and engineer for the electricity company selected and installed the clock while Mr A S Collings, the town clerk and engineer, designed the tower and supervised its construction. At first it was intended to put the clock on brackets but this was abandoned in favour of a brick tower with drinking fountains on the north and south face. [5] The idea of drinking fountains was deleted from the plan but the construction of a tower using bricks supplied by the council and labour provided by unemployed men receiving sustenance payments proceeded. At that time Australia and many parts of the world were suffering from a great economic crisis where many men and women were without employment.

For many years the tower remained undisturbed but in 1994 its location was subject to attack. With the increasing number of people living in the area and the dramatic increase in traffic on Nepean Highway, VicRoads, the body responsible for the construction and maintenance of major roads, wanted to formalise the two single lanes which were in fact four ‘de facto’ lanes into four lanes to accommodate the road traffic. But in addition there was a need to encroach on the nature strip on which the clock was positioned. VicRoads had applied for $100,000 in the 1994 - 95 budget to allow the project to proceed.

The Chelsea Council agreed in principle to the proposal as they saw some benefits, but they did have some specific reservations. They wanted assurances that they would be consulted about the proposal before it was implemented and insisted that the speed limit through the town be maintained at a maximum of 60 kph. [6] While the council recognised the widening of the road would mean the loss of some parking spots and the removal, or at least the re-siting of the clock tower, they had not resolved the fate of the tower and clock.

A report to council on the condition of the tower noted that some bricks were powdering with age, diminishing its external appearance, and the portion above the clock face had broken away from the structure because of rusting in the steel lintels. At least in part this deterioration was attributed to the salt sea air. [7]

The question was raised whether a planned clock in front of the Chelsea Hotel would be an adequate replacement for the centenary clock. There was also the suggestion that the clock tower should be re erected outside the old Chelsea Court House in the Strand, the headquarters of the Chelsea Historical Society, or in front of the municipal offices in Station Street. The view expressed by the president of the society was that the clock should be re-erected as close as possible to its original site. This was what was done. [8]

In 1997 the clock tower was demolished and re-built according to its original design almost in its original position but closer to the railway line. Costs were met by VicRoads. The local community once again had a historic landmark in pristine condition viewed by thousands of people who pass through or visit the town of Chelsea. 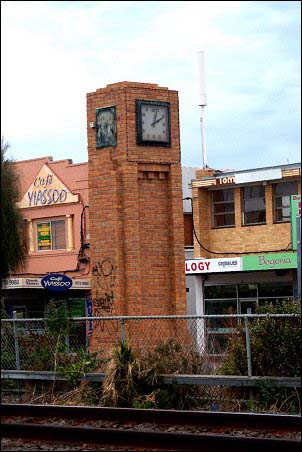