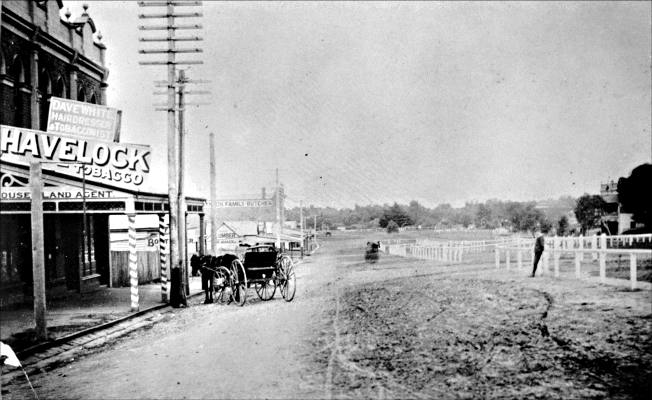 The Carnival held in the flag-bedecked town of Mordialloc in June 8, 1908 was declared to be a huge success with over a thousand people being present. However the members of the organising committee were slightly disappointed that the total money collected only amounted to £4/12/8 ½. Nevertheless the Mordialloc Football Club and the Moorabbin Brass Band shared almost £10 because the race entrance fees and other donations swelled the total money collected.

The program for the day commenced with a procession followed by a series of races and concluded with an unorthodox football match. The procession was watched by crowds of spectators who lined the streets on either side of its great length along the Beach Road to High Street, then along Main Street to the sports grounds. The whole enterprise started on time under the watchful eye of the marshal, Dave White, dressed as a brawny highlander. The Moorabbin Brass Band in new uniforms followed old pioneers in gaily-decorated vehicles who led the parade. Next came the whole force of the district cadet corps, seen to present a fine martial and soldier-like appearance according to the Southern Brighton Cross reporter. The Mordialloc Junior Girls’ Gymnastic Class carrying poles with pretty streamers attached followed the cadets. They in turn headed a large number of school children. The members of the local branch of the United Ancient Order of Druids (UAOD) came next in their white robes and long beards giving a patriarchal aspect to the procession.

Cadets after the 1909 Parade. Courtesy Mordialloc and District Historical Society.

After the Druids came the Mordialloc Supporters tableau made up of attractive young women dressed in the jumpers of the football club. [Misses C Packer, A Christie E McQueen, N Freeman, I Day , S. Dickson, E Hawkes, A West, A Pain, M Stuart, and little Tossie Weight.] The club secretary attributed the presence of this attractive cluster of charming young women as the reason for the rush to purchase club membership tickets. Then followed a series of decorated vehicles; jinkers and buggies decorated in the colours of the football club and a baker’s cart which gained the judge’s nomination for the best decorated vehicle prize. 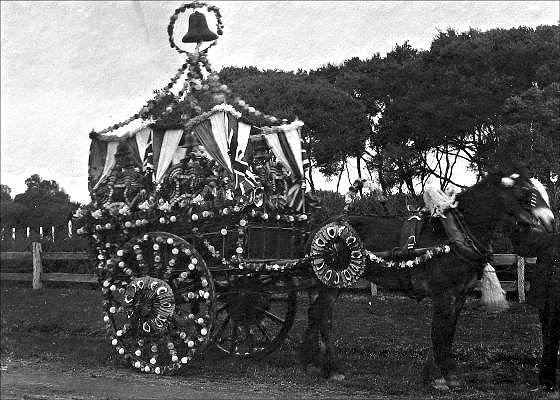 The last section of the parade provided the comic element. Punch of Punch and Judy was there together with United States’ Uncle Sam, a German Army Officer fierce enough to frighten a whole army, a Chinaman meek and mild, Britain’s John Bull, a comic Highlander and a savage ancient Briton. There were also donkeys, asses, bathers, highland lassies, minstrel boys, and a policeman whose friends failed to recognize him. But it was Mother Goose, alias Charley Johnstone, with his great stature and ample proportions, who won the prize for the best sustained character.

The culmination of the day was the comic costume football match. All the comic characters were lined up and numbered by the marshal. The even numbers formed one team and the odds the other. With the beginning of the match normal rules were forgotten by the lenient umpire, F Groves. Mother Goose, alias C Johnstone, kicked and handled the ball in a lady like manner while sneaking several goals. One participant tightly grasped the ball under one arm and ran from one goal to the other and had the crowd in fits of laughter. The ruck was reported as being fearfully strong requiring the umpire repeatedly to dive under a struggling mass of waving legs and bodies to extricate the red and white ball. Roars of laughter frequently greeted the efforts of the combatants. There appeared to be one general rule applying to all players. Whenever a player was brought down it was mandatory for all players in the immediate vicinity to throw themselves on top of him so it was a frequent sight to see pyramids of human bodies clad in all colours piled in different sections of the ground. As the players were exhausted and the darkness was rapidly approaching, the marshal called a halt and declared amidst the cheers of the crowd that the ‘evens’ were the conquerors.

Sixteen years passed before the Mordialloc Carnival was established on the bank of the creek to provide entertainment for Melbourne families. This new venture ran for forty four years involving several generations of residents, ceasing sixty years after the carnival at Mordialloc with its comic characters created much mirth amongst those fortunate to attend.