Cheltenham versus Clayton at the Cheltenham Recreation Reserve May, 1972. Courtesy Leader Collection.

The initial community action to establish a recreation reserve at Cheltenham, at least in part, had its origin with the Moorabbin Shire Council. In 1894 several councillors from the South Riding proposed that an approach be made to the Minister of Lands requesting that part of the water reserve in Weatherall Road be set aside for recreational purposes. Should the Minister grant this request, it was suggested that the management of the reserve should be vested in the hands of seven trustees, four of whom being councillors and three nominated by ratepayers. [1] To present the case three councillors, the shire secretary and the clerk of works waited upon Mr Best, the Minister. [2]

Mr Best listened to the deputation arguing there was a need for a reserve as Cheltenham had no proper cricket or football ground. Moreover, the local community was prepared to subscribe money to transform the unsightly piece of land into a well kept and beautiful reserve. While Best replied that he was personally sympathetic to their request he believed the Board of Lands and Works should be represented on the trust. He believed this was the general practice. The deputation responded to the Minister’s suggestion of representation citing other examples where this course was not followed and assured him the people who would be nominated could be relied upon. [3] The Minister agreed to consider the matter and convey his answer the following week.

Once the agreement of the Minster was received the virgin piece of land had to be cleared and action taken to make it suitable for community use. The council contributed day labourers for one week, twenty-two drays were lent and £12-15s was raised through subscriptions. An additional £2-17s was promised and the timber cleared from the land was sold for £7-13-9. Further fund raising efforts included a concert where approximately £10 was raised. After all the initial expenses were paid the trustees had £18 to fund future developments. 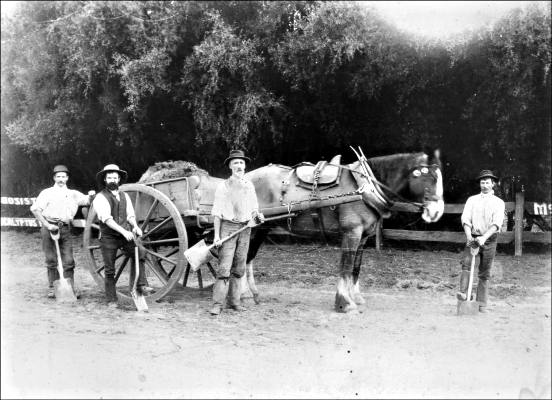 Day workers of the Shire of Moorabbin.

The concert held in the Mechanics’ Hall, in addition to being a financial success, was praised by the audience who, according to newspaper reports, listened with rapt attention to the “Soldiers Chorus”, the Beggars March” and “Calm is the Sea”. There were also nautical songs and recitations that held the interest of the audience. The evening concluded with a tableau. [4]

Tableaux, arranged by Nina Hicks, were a prominent feature of a second concert held three years later. These static displays of models representing some theme were very popular. The themes used on this occasion included “The Fortune Teller”, “Louise de la Valliere”, “The Stolen Kiss”, “An Eastern Slave Market” and “The Last Review – Napoleon Playing with the Children of General Bertrand”. George Scantlebury, the local doctor, his wife, and son, Clifford, were participants in the tableaux as were Lula Fay, Lewis Lakeland, Lily Ray, Amy Cane, Inez Hicks, Frank Robertson, A Dwight, Leslie Newbegin and Robert Reed. Other items on the evening were pianoforte, vocal and violin solos, and two humorous recitations entitled “The Recording Spook” and “An Irishman’s Opinion of Noah and the Ark.” From the point of view of the organizers the most significant outcome of the concert was the raising of £10 for the funds of the Recreation Reserve. [5]

After a period of inactivity, interest in the Reserve was stirred once again eight years later in 1906 when a letter was received by the Shire Council from P W Coleman. This letter was stimulated by the need of the local cricket and football clubs to find a ground on which they could play their matches. At that time football matches were played on Keighran’s paddock on the south-eastern corner of Point Nepean Road and Centre Dandenong Road opposite the Cheltenham Hotel, while cricket matches were played on land at the back of the shops in Charman Road. Both of these venues were coming under pressure for the construction of houses. [6] Hence the letter from Coleman, writing on behalf of the football and cricket clubs as well as the local bicycle club, requesting that the council make the reserve suitable for use by their respective associations. They wanted the Shire Engineer to establish suitable levels and supervise the work necessary to bring the property up to a satisfactory standard. [7] Cr Le Page supported granting the request, and pointed out that the players and supporters were prepared to spend from £20 to £30 to achieve this goal suggesting that the Council might assist if that sum was not sufficient. Council granted the request on the motion moved by Cr Le Page and seconded by Cr Scudds. [8] 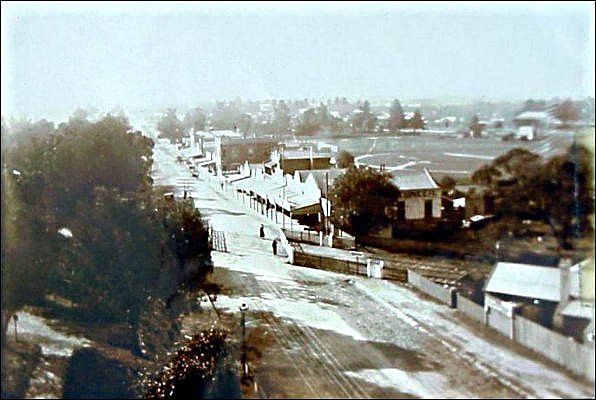 Dr Gerald Weigall in a letter published in the Moorabbin News the next week reminded Cheltenham residents that there had been an earlier movement aiming to develop a suitable recreation reserve and wondered what had happened to the £30 odd pounds that had been collected through public subscriptions. He reminded people that “A piece of land near the springs at the end of the Glebe had been levelled, fenced, planted with a hedge and kept locked. It was used to graze cattle and horses of residents.” [9] Unfortunately the initial work was left to a few and the reserve was not maintained, but by 1906 with the potential loss of the football ground, individuals were motivated to take action. Fairlam and Scantlebury, trustees of the reserve, were supportive of the move. [10]

The local paper reported twenty young fellows from the Cheltenham Football Club had assembled to form a working bee to cut and burn the scrub, and to clear a space for the playing of football, but a great deal of work still had to be completed. Cr Le Page, the president of the club, provided the refreshments for the working group to reward their participation. [11] 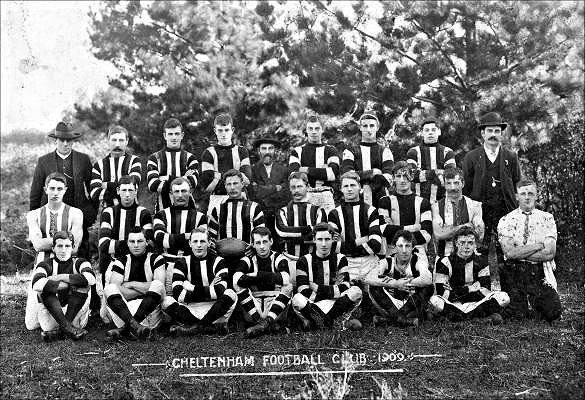 More than a year had passed when J Maple convened a meeting on behalf of the football club to discuss the need for a permanent sports ground at Cheltenham. The meeting held in the Mechanics’ Hall attracted a large audience drawn from various sports clubs, the shire council and the general public. Cr Le Page, president of the club, explained the situation. The land on which the club had been playing had been sold so it had to be abandoned and while the reserve was sufficiently cleared to play upon, it needed a vast amount of filling as it was swampy. James Monk, the vice president of the club, said all that was required was a little money and labour. One hundred pounds had already been spent on it and it was in fair order but more needed to be done to make it suitable for football and cricket. He proposed that the recreation ground be prepared as a sports ground and was supported in this move by T Marriott. [12]

Not all those present at the meeting favoured the proposal of Monk and Marriott. For some, the resumption of the former cricket ground in the Cheltenham Park was the better option. This ground, opposite the residence of Henry Comport in Tulip Road (Park Road) was at that time leased to Mr Rippon for grazing but it had the advantages of solid foundations and being well drained. Cr Brownfield recalled playing cricket on the old ground when he was a youngster and, he claimed, had put in some “hard graft too.” Brownfield moved an amendment to the Monk proposal with the support of T E Keys “that ways and means be devised for improving the Park.” This stirred strong reactions from some people present.

James Monk said if the amendment was passed it would make the Cheltenham people look like a lot of fools. He acknowledged that years ago they went for a park on Tulip Road and “Tom Keys and a lot of old buffers put a lot of work into that park but in their wisdom they thought it advisable to shift. Now they want to change again. They made a mistake in giving up the old park.” Cr Brownfield seized on Monk’s comment about ‘the mistake’ suggesting it was a splendid argument in favour of the park. James Monk realized the slip in his argument but refused to alter his stand. [13] 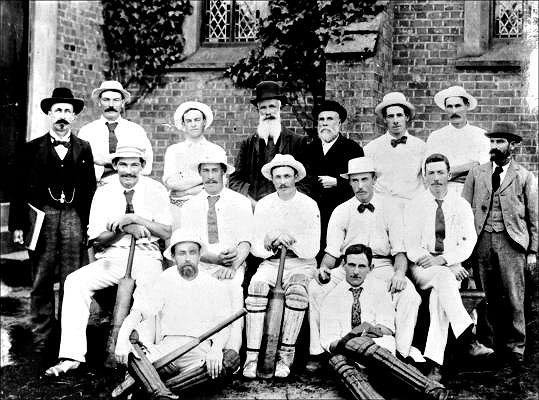 The meeting opted for developing the Recreation Reserve with only nine people supporting the Cheltenham Park suggestion. The Shire Engineer advised that the Cheltenham Recreation Reserve could be made into a good sports ground but it should be done slowly, bit by bit. Cr Brownfield speaking as President of the Shire said the Council would be prepared to help but only if people were prepared to help themselves, because otherwise he did not feel councillors could justify spending the ratepayer’s money. Perhaps this encouraged about twenty people present to express their willingness to contribute a day’s work or a day’s pay to further the development of the Reserve. 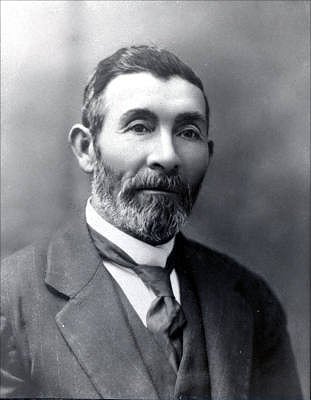 The following week the newspaper was able to report that over one hundred yards of soil had been carted to the ground and it was in the process of being spread and levelled. The Shire Engineer, A C Smith, attended, pegged out the boundaries and gave professional advice where needed. Those individuals who had promised to contribute a day’s work or a day’s pay were reminded that their assistance was needed immediately. The various sports clubs contributed £15 to the improvements and requested a contribution of £10 from the Shire Council. Councillors were most surprised by the modest nature of the request but were assured by the Shire Engineer that with the expenditure of £25 the effect would be surprising. As a result the councillors unanimously granted the request. [14]

Almost twelve months later, at the beginning of the football 1908 season, a match between Cheltenham and Moorabbin was played on the Recreation Reserve. Cheltenham players were the victors with some fine play from Scudds, King, Warburton and Caudwell. The umpire was Tom Porter who was seen to be “rather indulgent.” The ground itself was very dusty and slow owing to the dry weather. [15] Nevertheless, the football and cricket clubs now had a home and were no longer reliant on gaining access to private property to play their matches.

The ground became the venue of some serious tussles in cricket and football finals and the location of gymkhanas and other community celebrations. In 1951 it became the first home of the Moorabbin Football Club as the club entered the Victorian Football Association competition