The Prime Minister of Australia, Mr J B Chifley, announced in a national broadcast from Canberra, on August 15, 1945, that the Japanese had unconditionally surrendered in the Pacific and the men and women in the services would be returning home. Shortly after, a meeting of local organizations was convened by the RSS&AILA to plan an appropriate welcome back function. [1] A committee was elected and named the Cheltenham Citizens’ Welcome Home Committee. This was the beginning of a controversy that stirred much discussion and correspondence in the local newspaper. Should ‘hard ‘liquor’ be provided at the function?

Representatives from many organizations, including the Dads’ Association, the Mums’ Auxiliary, the Red Cross, the Victory Club, Ministers Fraternal, State School Mothers’ Club, RSL Women’s Auxiliary and sporting clubs, attending the meeting presented a variety of ideas on the nature of the welcome home program but finally it was resolved to conduct a series of dinners, each followed by a dance and other entertainment, to which friends and relatives of the servicemen could be invited. It was decisions which flowed from this resolution which caused considerable concern and ill feeling amongst some members of the community. First there was the issue as to who should be invited and secondly whether ‘hard liquor’ should be on the table at the dinner. [2]

Initially it was thought that the welcome home should be limited to those service personnel who were Cheltenham residents. However, this was not satisfactory to several of the organizations present at the meeting as they drew members from a wider geographic area than just Cheltenham. While it was argued that other districts would be providing welcome home functions for their residents, the decision finally accepted was that all returning servicemen and women who were members of the clubs and organizations represented at the meeting would be included in the welcome home functions irrespective of their residential address.

To finance the various gatherings it was decided to call for donations from the community and for the committee to arrange a door to door canvas for funds. In addition, the Moorabbin News was asked to encourage contributions and to publish the names of the donors together with the amounts of money they gave. This the News did on at least two separate occasions and reported that by October 31, 1945 £236/5/6 had been received. This sum was largely made up from donations ranging from one shilling to less than one pound from individuals, although some organizations gave much more. The Cheltenham branch of ANA Lodge gave ten guineas, while the Ensign Masonic Lodge, and Burke and Scott an estate agency in Cheltenham, each gave five guineas. [3]

At the second meeting of the committee the secretary (Jack Phillips) reported that one of collectors had been offered a donation of liquor rather than a donation of money. This news brought an immediate response from the president of the committee (Mr Davie) who indicated his opposition to any intoxicating liquor being available at any function organised by the committee. Should the committee plan otherwise he declared he would resign his membership. This drew a stunned reaction from many present but the vice president (Reg Bailey) indicated his disagreement, noting that while everyone was entitled to their own opinions he could not see one hundred and fifty men sitting down to dinner without the opportunity to have at least one strong drink. In his view the committee had to cater for everyone’s tastes and it was not doing so if beer was not on the table.

The treasurer (Mr Spencer) spoke in support of the views of the president pointing out that the committee did not want the men going to the entertainment after the dinner under the influence of alcohol. [4] Moreover he believed those men who had been on service for a long period would only need a few drinks before they were ‘under’, implying they had not been accustomed to drinking strong drink while on service. Like the president, some church representatives threatened to withdraw and indicated no money would be subscribed to fund the event if beer was to be served. Finally the supporters of the non alcoholic position won the debate by 20 votes to 12.

The publication of this decision generated a strong response in The News entitled “Big Show, No Beer, Few Boys” The reporter, G T, in a heavy sarcastic manner condemned the final decision of the welcome committee, who, he thought, might be fearful of the men getting drunk and starting a riot at the post dinner entertainment. “Perhaps, with a bit of luck a murder or two might be committed by some of the beer-crazed diggers, and that would at least put Cheltenham on the map,” he wrote. He went on to point out that the offer of alcohol was not a nine gallon barrel of beer but seventy two pints or one hundred and forty four half pint glasses to be shared between 150 men. Hardly sufficient to cause the men to get out of hand and become a nuisance to the womenfolk present at the concert he claimed. The thought that once the boys went into the services it was the last they saw of intoxicating liquor was false and he disputed the claim that any of the boys who had been away for a fair period of time would be unable to stand even a small quantity of drink. Even those who suffered deprivation as prisoners of war, for three or four years, had the opportunity since returning home of ‘getting back into their stride at the bar’ if they were drinkers before their capture. Most importantly those who abstained from alcoholic drinks would not have been forced to drink at the dinner. GT’s final point was that the committee should ask the boys at the first dinner if they wanted hard drink or not,. After all it was public money the committee was spending. [5] 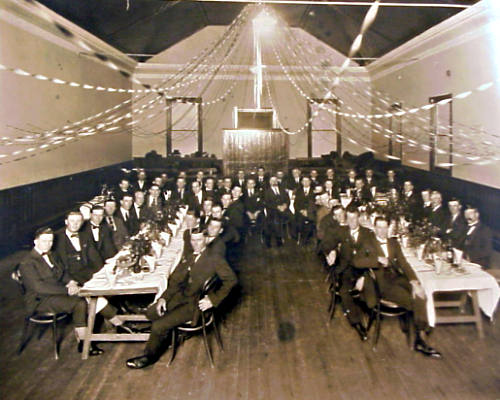 On November 14, 1945 the first of the welcomed home functions was conducted at the Mechanics’ Hall with fifty six ex-servicemen, out of the one hundred and twenty three invitations that were issued, being present. This poor attendance was attributed by some to resentment felt at the committee’s decision regarding strong drink. There was plenty to eat, however, with cold meats, salad , hot potatoes and peas in abundance. Sweets included fruit salad , icecream and wine trifle. John Smith, a baritone, sang at the dinner but the News reporter felt that more entertainment needed to be provided at future events to avoid the boys sitting and staring at one another across the table for most of the evening. At the conclusion of the dinner each man was presented with a certificate in recognition of his contribution to the war effort. The diggers then went to the concert in the Soldiers’ Hall.

Although the crowd welcoming the servicemen at the Soldier’s Hall was disappointingly small those present were enthusiastic in showing their appreciation of what they had done. The entertainment was considered to be good, with tenor and soprano soloists, a comedian, and a magician performing. Community singing was also a feature. It was during the evening that the official welcome home address was given by Mr Davie, president of the Welcome Home Committee, when he spoke of the sacrifices they had made and expressed the hope they would soon be rehabilitated to their new life. [6] 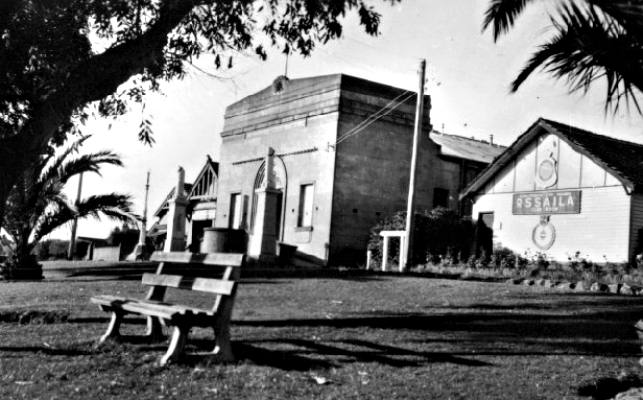 Following the action of the News in conducting a plebiscite to determine the community’s attitude to the ‘dry’ welcome home function, the newspaper claimed it was being grossly misrepresented by ‘some busy-bodies’ who were spreading a story that the organization had changed its policy on the drink question. It was also suggested that the News had come under the sway of the Beer Barons. These stories the paper strongly denied, stressing that the organization stood for temperance and the sane administration of the licensing laws. Temperance does not mean intolerance nor does it mean total prohibition of liquor and it was intolerance that was being displayed in Cheltenham at that time. It was this dictatorial attitude that caused the poor response to the first welcome home event, the paper claimed. [7] At the next meeting of the Welcome Home Committee, members witnessed the surprising resignation of the president, M Davie, and the election of George Barrow to the vacancy. [8]

At a subsequent meeting in February the committee once again addressed the issue of alcohol being served at a welcome home gathering. The arguments canvassed in the earlier meeting were again raised and the final decision confirmed what had been decided previously; no alcoholic beverages were to be available at the next welcome on February 21. The decision was not a surprise to the News reporter who suggested the meeting was ‘packed’ by people who had gained the same decision at the earlier meeting. [9]

At a meeting in March, Mr F Belhl asserted that the dinners had been a flop and Mr Spencer, the treasurer, blamed the News for the failure. The committee, Mr Spencer said, had been slated by the News for the its decision not to allow liquor at the dinners, a position he believed most appropriate. “Our boys went away clean, and we want them to be the same when they come back!” was his view. Mr Phillips, the secretary, disagreed with the accusations made against the News, as he thought the paper had given a true report to the public of the committee’s discussions and actions. Amidst all the tensions of the meeting a motion for the disbandment of the present committee was moved and approved, and the secretary was directed to call a meeting to form a new committee which would arrange and manage future welcome home events. [10]

Initially there was some difficulty in getting people to accept nomination as office bearers of the new committee but finally the group was formed. Mr A Boyd was president, Mr K Whitehead, secretary, Mr Spencer, treasurer; while Mr Smith and Mr McNee, were vice presidents. The new committee decided to abandon dinners and by doing so avoided the controversy about the provision of alcoholic drinks. Instead they agreed to hold a public concert to be followed by a supper for the servicemen, their guests and friends. A suggestion of an outdoor pageant to be conducted on Victory Day was rejected as some members thought it was too much to expect the ex-service men to take part in a march and the scheme would require too much work on the part of the committee. [11]

The function organised for July 8, 1946 was a great success. There was a capacity audience at the Soldiers’ Hall with many ex-servicemen from all services in attendance. The reaction of the audience to Muriel Howard singing the Nun’s Chorus was described in the press as deafening. The receptions for other artists and soloists, including Beatrice Oakley, Eric Jones, Gordon Craig, Peter Leonard and Fred Sutcliffe were equally rewarding for the organising committee. [12]

After a long and disastrous war, the organization of a series of public events that should have been marked by feelings of community unity, celebration, thanks and goodwill were marred by the strong but diverse views held by individuals in the community regarding the consumption of alcohol. The final solution adopted to avoid conflict was to arrange official functions where the opportunity for the consumption of alcohol was removed or lessened yet the goal of expressing thanks and giving recognition to the returning servicemen and women was achieved.