At six o’clock on the morning of May 19, 1891 William Akehurst, a carpenter on his way to work, was passing the Beaumaris terminus of the Beaumaris Tramways, near the Great Southern Hotel, when he observed a stationary tram car without lights. Curious as to why this should be at such an early hour of the day he approached and found Daniel Jones unconscious with his foot caught in the step of the tram. Clearly Daniel was seriously injured so Akehurst immediately sought help. Daniel was quickly conveyed to the Alfred Hospital where he died shortly after arrival from shock caused by his extensive injuries.

Although there were no witnesses to the accident the events were reconstructed. The Beaumaris Tramway Company had employed Daniel William Jones for about two years as foreman. He drove Thomas Haydon, the secretary of a Melbourne racing club from the Sandringham Railway Station to his home at Rickard’s Point (Ricketts Point) arriving at about 12.30 a.m. There were no other passengers and Haydon indicated at the inquest that Daniel was quite sober and in excellent spirits. He said he heard Daniel change the horse from one end of the tram car to the other and go back up the line to the stables at Black Rock. [1]

Arriving at the Black Rock stable it appears he changed the horse for the purpose of running the car into the sheds but having missed the points dismounted to rearrange them and in doing so slipped off the footboard catching his foot in the step and pinning himself under the tram. The horse, possibly startled, set off for the Beaumaris terminus dragging Daniel over three miles causing him to sustain serious injuries. [2] Dr Crowther at the Alfred Hospital described the injuries as “a severe compound fracture of the left thigh and a similar fracture of the right leg, and severe bruising and abrasions over the body, especially the right side of the chest and the face. … They (injuries) might all have been caused by his being dragged along the road without the car wheel going over him." [3]

Robert Gow, the manager of the Beaumaris Tram Company said it was Daniel Jones’s job to maintain the points and the step from which the deceased had slipped had recently been roughened, suggesting that the company was not liable for the accident. [4] The coronial inquest conducted by C Candler reached a verdict of accidental death. “Daniel William Jones died from shock for severe injuries caused by being accidentally dragged along the Beaumaris tram line by a tram car. He slipped and his foot caught in the opening under the platform of the car. [5]

The funeral service for Daniel, attended by several members of the Foresters’ Lodge in regalia, was conducted by the Rev Father Carey. The burial took place in the Roman Catholic section of the Old Cheltenham Cemetery. The gravestone carried the inscription; Foreman Beaumaris Tramway Accidentally killed 19th May, 1891. A Good and Conscientious Servant.

Daniel was born in Maryborough, Victoria and was survived by his wife, Mary (nee McDermott) and three children, the eldest being eight years old. However the children were considered to be “practically orphans" as their mother was an inmate of the Kew Lunatic Asylum. [6]

To provide some assistance to the children a concert, organised to raise money, was held in the Beaumaris Hall on June 6, 1891. The performers included G M Buchanan, John Sutherland, the Quartet Party and Clara Cunningham as well as several other members of her family. Cr Lamb Smith, who presided, thanked all those who had assisted and noted that while the hall was not full eight hundred tickets had been sold. He also acknowledged the contribution of the Tramway Company who provided free transport from Sandringham and Cheltenham stations for anyone holding a concert ticket.[7] 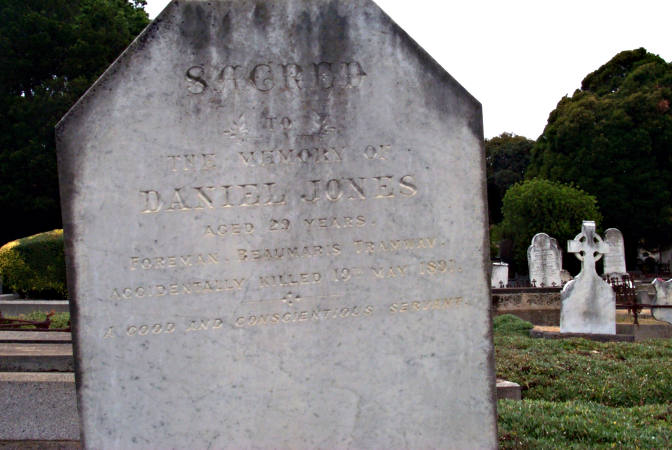 Grave stone of Daniel Jones at the Cheltenham Pioneers’ Cemetery, 2004.