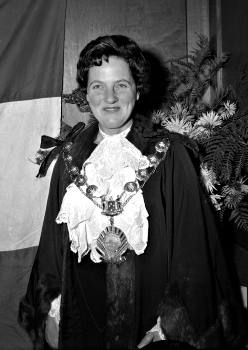 Shirley Burke, a practising solicitor, qualified accountant, wife, and mother of three children was elected by her council colleagues in 1961 as only the second female mayor in the history of the City of Mordialloc. Cr Denyer pointed out in a statement to the Herald that as Cr Burke was seen to be fit to be elected Mayor, “she should be given the same respect and all the dignities accorded to a man.” The Lord Mayor of Melbourne, Cr Nathan, thought otherwise.

It was a tradition of some 80 years for the Lord Mayor of Melbourne to invite all the mayors of the municipalities in the metropolis to a banquet at the Town Hall. This event was all male affair. On the very few occasions where women were elected as mayors they chose not to attend or to attend a separate function with the Lady Lord Mayoress. Not so Shirley Burke! She was the legally appointed mayor of the City of Mordialloc and she intended to represent the city at the Lord Mayor’s function. Gender was not relevant in her eyes.

The Lord Mayor was dismayed; no female mayor had ever insisted on attending the function and he requested that a former male mayor and current councillor be nominated to represent Mordialloc. Cr Burke indicated that, as more enlightened days had arrived, women doing the same work as men should receive equal treatment. Nevertheless, she recognized that the Lord Mayor had the perfect right to withdraw his invitation for her to attend. The Lord Mayor pleaded with Cr Burke to reconsider her decision, but to no avail. Consequently, he withdrew his invitation.

Cr Burke in her correspondence to Cr Nathan suggested that the City fathers in perpetuating a rule of “males only” at the Lord Mayor’s dinner were acting in an unrealistic, unjust and parochial manner. A Lord Mayor, she argued, who acted as a gracious host and invited a few female business women to accompany a woman mayor would be remembered as a progressive and fair gentleman. She reiterated her stand, “I do not wish to be represented by any male representative.”

Despite the plea of Cr Burke the Lord Mayor maintained his position noting that he looked forward to seeing women in greater numbers entering civic or community service and when this occurred the current practices associated with the Lord Mayor’s dinner would be revised. “Madam Mayor, you have made your point most forcibly. I do wish you had been somewhat less uncompromising,” he wrote in a letter to Cr Burke.

The Editor of the Moorabbin News, Eddie Trait, gave strong support to Cr Burke noting “the lot of woman in public life is certainly not easy.” He concluded by suggesting an end to spending the ratepayers’ money on free shows when the existence of many worthy causes existed which should have a prior claim on the council treasury.

Following this fracas between the Lord Mayor Melbourne and the Mordialloc City’s Mayor, which was widely reported in the daily and local papers, and accompanied by an avalanche of letters to the Lord Mayor’s office, the rules were changed and female mayors were admitted to subsequent Lord Mayor’s dinners. A victory for the path blazer, Cr Shirley Burke!