One day in December 1881 the small village of Mordialloc was a popular destination for politicians. Thirty gathered to witness the official opening of the railway line from Caulfield to Mordialloc by the Minister of Railways, Thomas Bent. Why did they make the effort to be present? Was it in recognition of the historic event and the wish to be seen. Maybe it was due to the rising influence and astuteness of Bent and the desire of his colleagues to keep in his good books in the hope he would provide a line in their constituency. [1] Maybe it was the prospect of a free meal at Bloxsidge’s Hotel? Perhaps all of these factors were operating in various degrees or perhaps there was something else? 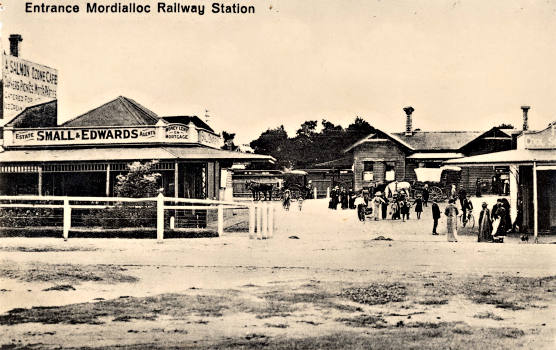 The politicians, friends and invited guests of the Shire of Moorabbin travelled to Mordialloc on a special steam train leaving from Princes Bridge Station at twenty six minutes after twelve, stopping at South Yarra, Hawksburn, Caulfield, East Brighton, (Bentleigh), South Brighton (Moorabbin) and Cheltenham. In addition to Thomas Bent, Minister of Railways, the Solicitor General and the Minister of Agriculture were on board together with Sir John O’Shanassy a former Premier (1857), John Keys, a local member, Mr Bray, Premier of South Australia, and Mr Gregory, Survey General of Queensland and a noted explorer. An earlier train leaving Melbourne at thirty five minutes past ten transported four hundred school children from East Brighton, South Brighton and Cheltenham free of charge to participate in the welcome to officials and guests at Mordialloc. [2]

Mordialloc was decorated with bunting, which according to a newspaper report, fluttered in a light breeze. At the entrance to the bridge, which straddled the creek, was strung a banner bearing the slogan “Peace, Progress and Prosperity”. [3] On arrival of the special train the school children under the direction of William Clayton sang “God Save the Queen and this was followed by a short speech of welcome by the President of the Moorabbin Shire, Cr William Ward, who congratulated the government on its action and complimented Bent on his foresight in putting a proposal forward for a railway line to Mordialloc eighteen years previously .

After the brief ceremony at the station two hundred individuals walked across the bridge under the banner to Bloxsidge’s Bridge Hotel where they were accommodated in a large marque, enjoyed a substantial banquet ‘where every delicacy in season was in abundance’, and participated in the toasts to various organizations and groups. [4] Members of the public were invited to attend provided they had a ticket obtained from any councillor of the Shire of Moorabbin for one guinea. [5] 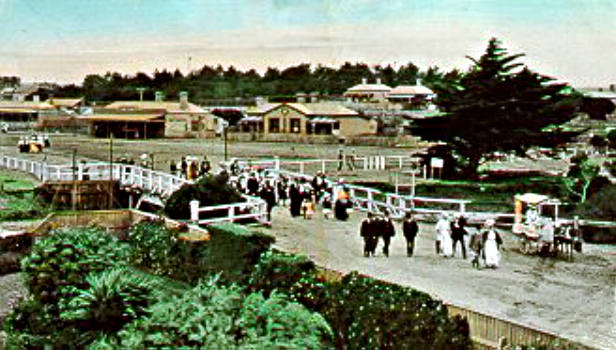 Bent said he did not intend to make a long speech on any topic and expressed a hope that Sir John O’Shanassy would mention something about the history of the area. O’Shanassy took the opportunity to recall that he was one of the very first settlers in the area leasing 40,000 acres around the place where the present function was taking place. At the time he was young, married and had children born in the district. Despite the fact that he worked hard to improve the property, he said, he had to abandon it after four or five years as he could not make sufficient money to pay his servants. He contrasted that situation with 1881 when land that he found useless almost forty years earlier was valued at £10 to £20 an acre. O’Shanassy, to the amusement of the crowd, took the opportunity to strike at the government’s slogan of ‘Peace, Progress and Prosperity’. He was pleased he said to see that the district had made great and real progress, “not the sham progress that we hear so much about now.” [6] 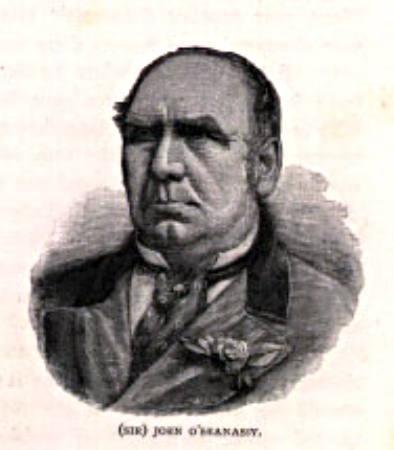 At the conclusion of his speech O’Shanassy introduced the next speaker, Mr Bray, from South Australia [7] as a man of ideas, a person who advocated an Australian parliament and free and unfettered trade between the colonies. Many years were to pass before both ideas were implemented. Bray drew a laughing response from the assembled people when he expressed the hope of attending a similar ceremony to the current one at the opening of a railway line between Melbourne and Adelaide but unfortunately he bemoaned the fact that he could not fix an exact date.

While the assembled crowd showed interest in the question of free trade between the colonies and the resolution of the disputed boundary between Victoria and South Australia, the attention of many present was upon the fares to be charged for travelling on the train and what they saw as the absurd decision of the government not to run trains to Mordialloc on a Sunday. Several speakers alluded to these issues much to the amusement of members of the public. The Minister of Agriculture in proposing the toast to the success of the Municipalities commented that he had not been to Mordialloc before. An interjector said, “Come on Sunday”, to which Mr Young replied that he objected to travel on Sundays. This brought forth the response ‘Oh!” Thomas Attenborough, an early resident in the district and a councillor both at Moorabbin and Dandenong, when proposing the toast to parliament queried the wisdom of the government’s decision not to provide for Sunday train services. [8]

As a member of the Brighton Council and in responding to the toast to the municipalities, Thomas Bent made the points that he had only been Minister of Railways for five months, the new line was still in the hands of the contractors, and policy decisions had yet to be made. It was too early to anticipate whether the line would be opened on the holy Sabbath. Nevertheless, after talking with the people of the district, he said he would do his duty without fear, favour or affection, no matter what the consequences. The people of the district he represented had confidence in him. Bent observed that some people thought the fares were too high, although, he claimed, they were similar to fares charged for similar distances travelled on other lines. Perhaps after abolishing some of the abuses in the system, such as the issuing of free passes, the cost to the travelling public might be reduced, he suggested. [9]

Bent also took the opportunity to hit back at the comment of Sir John O’Shanassy on the government’s motto of Peace, Progress and Prosperity. Despite what O’Shanassy thought, the people of the district believed in it, Bent claimed. He continued, “There is no doubt that the people of Mordialloc had succeeded where O’Shanassy was a failure and could not afford to pay £10 per annum for an enormous area.” [10]

After the speeches and when the line was formally declared open by the Minister of Railways, most of the company dispersed. The special train that brought politicians and guests from Melbourne returned them shortly after eight o’clock. Mr Lancashire, the president of the Mornington Shire, on his journey home, suffered a serious accident dislocating three ribs when his buggy capsized. [11] Others delayed their departure to accept the invitation of the Bloxsidges to continue the celebration of the historic event by dancing the night away. The rest returned home contemplating strategies that could be adopted to achieve a service on Sundays and a lowering of the fares to encourage patronage.