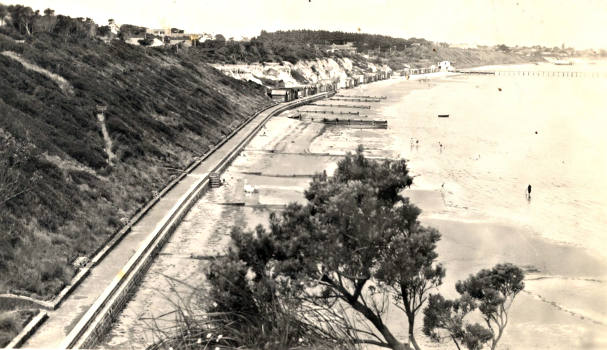 Until early last century the white clay cliffs were a feature of the Mentone foreshore, contributing to the fine white beach that attracted swimmers and artists. It was a place of natural beauty. It was along this strip of sand that some people built bathing boxes and the Mentone Life Saving Club first established itself in 1922. During the economic depression of the 1930s a promenade and stone breakwater were created at the bottom of the cliffs near Charman Road and stretched for approximately four hundred yards to below Mundy Street. The cliffs were blasted and natural vegetation planted in an effort stabilise the cliff face. Almost twenty years later the government instrumentality, the Board of Works, decided it was time to continue the work of stabilisation by giving attention to that section of the cliffs between Mundy Street and Kitchener Street, but when the public learned of the Board’s intentions there was an outcry.

For some time Mentone residents, conservation groups and visitors were aware that the cliffs were suffering from erosion and believed something should be done about it. In 1969 the Beaumaris Coastline Conservation League listed ten areas that needed attention and the Mundy Street - Naples Road section was noted as the most critical. [1] The problem was that there was a difference of opinion of what caused the problem and therefore what should be done to solve it. The Board of Works saw the erosion being caused by wave action, whereas the conservationists believed the problem was caused from water seepage and run off from the top of the cliffs. Each cause called for a different solution.

The Conservation League, dissatisfied with the Board’s plan, proceeded to employ its own landscape architect, Mr McKenzie, and commissioned him to prepare an alternative plan which preserved the natural beauty of the location. Mr McKenzie visited the site on March 15, 1970, and three days later the Mordialloc News reported that the Board proposed to commence work on the cliffs immediately. The newly formed Mentone Clay Cliffs Committee were dismayed at the news and called a public meeting in an effort to halt what they described as the ‘Butchery of the Cliffs’ and threatened to use both physical and legal action to fight the Board’s proposed treatment of the cliffs. Two hundred people attended a meeting at the Mentone Life Saving Club but by that time the Board’s bulldozers had commenced their work. 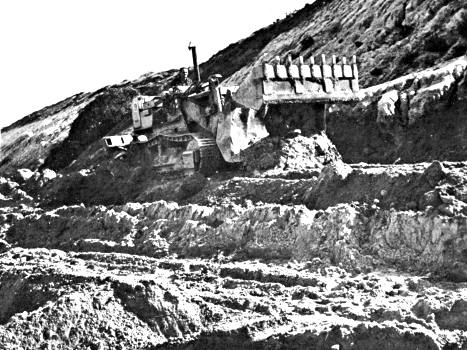 Board of Works bulldozer at work carving away a section of the clay cliffs, 1971. Courtesy Leader Collection.

Appeals were made to the Minister of Local Government, Dick Hamer, to intervene. He tried but said his meeting with the Board was ‘fruitless’ and announced the matter was in ‘the Board’s hands’. J Iggulden, the president of the Beaumaris Conservation League, said they had been ‘double-crossed’ and wondered whether the Minister double-crossed the Board or the Board double-crossed the Minister. The chairman of the Better Beaches Committee said Mentone would soon not have a beach, while Mr Gadd of the Life Saving Club was concerned about the future of his club. He said, “In 1936 Mentone had a reasonable beach and in 1936 more than five thousand people attended a carnival” but he queried whether this would occur in the future. [2]

When the matter became an item for discussion at the Council, two Mordialloc city councillors left the table pointing out that they had a pecuniary interest. Cr Hayes promptly absented himself along with Cr Sambell. Cr Hayes was an employee of the Board of Works and Cr Sambell pointed out he was a Commissioner of the Board, appointed as a representative of council. Cr Buxton thought the situation was ridiculous and had reached a point of absurdity. He said if this action was correct every time a matter concerning the Board of Works was being discussed Cr Sambell would have to withdraw. Cr Green added to the confusion, for as vice-president of the Better Beaches Committee, he thought he too might be required to declare an interest under section 181 of the Local Government Act. [3] 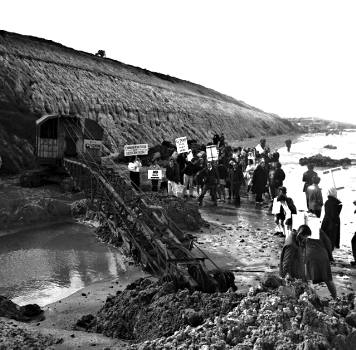 Protest against Board of Works treatment of clay cliffs, 1971. Courtesy Leader Collection.

The Council sided with neither the Board of Works nor the conservationists but councillors agreed to ask the Board and the new Minister of Local Government, Alan Hunt, to suspend work on the cliffs and seek to resolve the disagreement through arbitration. Cr Moore argued that if the board continued with its breakwater or rock wall at the base of the cliff the beach would be ruined and rats would be attracted to the site. Nevertheless, his colleagues declined to issue a writ against the Minister and the Board to constrain the project, as some members thought it would be a waste of money, although they did agree to meet with a small delegation from the conservation groups. [4]

Another public meeting at the Mentone Life Saving Club was called for May 14, 1971, to voice opposition to the actions of the Board. The previous week, Mr Croxford, the chairman of the Board said the conservationists were biased over the cliffs and Mr Hunt as Minister of Local Government endorsed the Board’s treatment. Hunt said it was time for “discussion to cease and action start.” [5] Despite this announcement by Hunt the meeting resolved to ask him to receive a deputation of locals to discuss the cliffs. They thought it important that he be given both sides of the cliffs story for the ‘first time’.

Mr Wall, Mr and Mrs J Iggulden, Mr Ridland and Mr P Scullen formed the deputation to the Minister of Local Government. They received a good hearing but believed the decision had been made beforehand. They then sought a meeting with the Minister for Lands, Mr Borthwick, in an effort to stop the Board going ahead with plans for a sloping rock wall, and they also requested a meeting with the commissioners on the Board of Works. 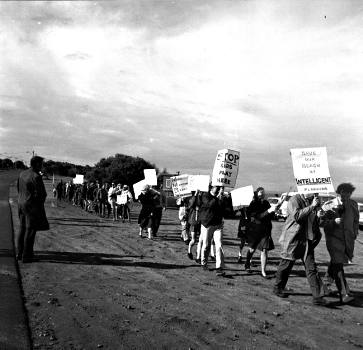 People Demonstrating about treatment of the cliffs. Courtesy Leader Collection.

Although the conservationists failed to stop the Board implementing its plan, they maintained a watching brief and complained from time to time about the needless destruction of trees and undergrowth on the top of the cliffs, and the Board’s lack of sensitivity to the environment as they proceeded to construct “a dull, uninteresting grass slope”. Later the Mordialloc Council asked the Board of Works to confer with its engineer and superintendent of parks and gardens before commencing the replanting of the cliffs. [6]

By 2000 the natural, eroded white clay cliffs had been replaced with a sloping cliff covered in native, salt-resistant plants. Life saving carnivals continued to use the site. The area and amount of sand had increased, at least in part due to the cliff project, but also and probably primarily, because of a major sand restoration project in 1977. The original fears of local residents that their beach would be lost due to the clumsy and insensitive actions of the Board of Works did not eventuate but the artistic community were left to mourn the loss of the white cliffs that featured in paintings of an earlier time. 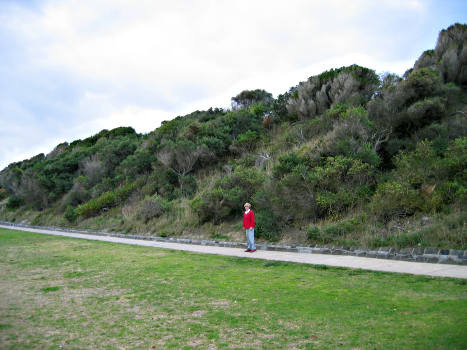 The Restored Vegetation on Cliffs, 2004.