Throughout the municipality of Mordialloc in the 50s and 60s there was a growing demand for facilities that were available and seen as being ‘normal’ in other council districts. Many young families had moved into the district after the Second World War and wanted kindergartens, youth centres and libraries, while the older citizens sought a club where they could meet their friends. But there were other services also needed. Roads and drainage were urgent requirements for many people living on the eastern side of Nepean Highway where excess water was a problem and unmade roads were quagmires in winter making it almost impossible to get out of their homes. Life for many was bleak and miserable. What should council’s priorities be? Where should they spend the money raised from rates and borrowings? How could they make it spread around?

In 1956 Cr Samuel, as Mayor of Mordialloc, called a public meeting at the Mentone City Hall to discuss whether a community centre should be established in the municipality. As the idea of such a centre providing accommodation for a library, a youth centre and an elderly citizens club was enthusiastically welcomed by the ratepayers and residents attending the meeting, a committee was formed to push the proposal forward. [1] 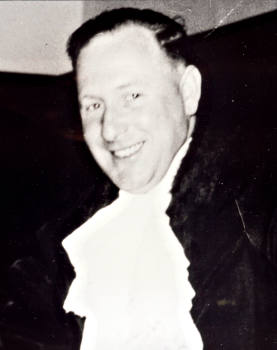 Jack Ferguson a qualified architect from Mordialloc drew up plans for the new centre and had them submitted to council. The plans made provision for a large auditorium seating 350 people. It had a covered entry, ticket boxes, a stage, dressing rooms with a toilet and a storage area. The complex also included a larger toilet block, elderly citizens’ rooms with a television, a rehearsal area and a meeting room. The youth centre section of the facilities had a gymnasium squash courts, repair store and a reading room. Council approved the plans in principal.

The council made application to the Loans Council for permission to borrow £50,000, and approval was given for £30,000, part of which was to finance the building of the centre on council land at Parkdale. This land in Heslop Street, at the rear of the shopping centre, was purchased over a nine or ten year period with no specific purpose in mind for its use. A difficulty for the community centre planning committee was that not all councillors saw the loan money of £30,000 being spent on the community centre. Cr Hawken, by this time mayor of the city, commented that the money was given for ‘permanent works and undertakings’ and indicated council had not reached any decision on the specific projects to be undertaken. Cr White saw the providing of sewerage to unsewered areas and the construction of unmade streets as a higher priority than a community centre. Cr Sambell who was concerned about the interest burden that would have to be carried by the ratepayers if the loan went ahead supported him. Cr Samuel a strong supporter of the concept of a community centre was angry with his colleagues and didn’t mince words at a council meeting where he suggested Cr Hawken wanted to use the loan money to finance extensions to the City Hall. [2] 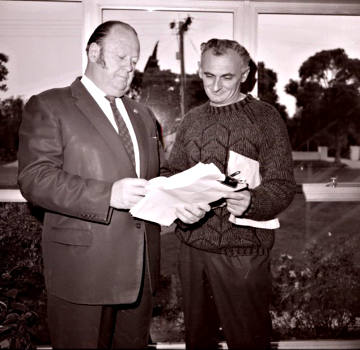 Earlier Cr Hawken successfully moved a motion that council should put aside £1000 each year for five years to give the centre committee some encouragement. This money plus interest would be a substantial amount to get the project going, he claimed. Cr Samuel responded, “Don’t kid the people along with this £1000 a year.” It was shortly after this exchange that Cr Samuel retired from council to take up residence on the south coast of Queensland, no doubt disappointed that he not been successful in advancing the community centre project. “There are plenty of arguments that can be advanced against establishing a community centre but none are really good enough to squash it,” he declared. [3]

Some members of the community did not give up. They quickly organised a public petition which urged the Mordialloc City Council to adhere to the original plan for financing the proposed community centre in Parkdale A public meeting was called. At a council meeting Cr Hawken explained the council’s controversial decision to put aside £1000 a year for five years rather than use £30,000 which the Loan Council had given permission to borrow. His comments were reported in the local press. The cost of the centre was estimated at £65,000 with a possibility of an increase to £70,000 because of rising costs. This meant, Hawken suggested, a cost of £10 per head to cover capital costs and interest. Committing such a sum would hamstring the council in providing other services he claimed. Although not against the project he saw other community groups who built and paid for their own facilities as being disadvantaged as they would now be asked to share the burden of the cost of the proposed facility at Parkdale. [4]

G Wildman, chairman of the Community Centre Committee, disputed Cr Hawken’s statements and asked, “Why the council after applying for a loan and receiving permission to borrow £30,000 had resolved not to raise the money for this purpose?” He believed the financial cost to individual ratepayers would be £1 per year for 10 years and the proposed centre differed from the small halls built by advancement leagues or progress associations in that it was to serve a broad range of interest groups and provide a multiplicity of services. [5] Nevertheless, the council maintained its position,. It did not have the funds to build a centre. [6]

In March 1958 council heard a report on the results of a questionnaire that was included with the rate notices sent to ratepayers. The questionnaire asked for their views on the proposal to build a community centre. One thousand three hundred and forty three replies were received and of those 379 favoured a rate of ½ d in the £ being levied over ten years to finance the building of the centre. The total number of replies represented approximately twelve percent of ratepayers in the municipality. [7]

Cr Shirley Burke, a new councillor from the Parkdale ward, pointed out that 944 ratepayers indicated their opposition to the project but there was a much larger group who were so apathetic they did not reply to the questionnaire. Given this situation she believed the council could proceed with the scheme without creating an ‘uproar’ from its citizens. She also queried whether people understood what the project entailed. The words ‘community centre’ were not prominently displayed on the questionnaire and the council had done nothing to bring the questionnaire to the attention of the ratepayers. 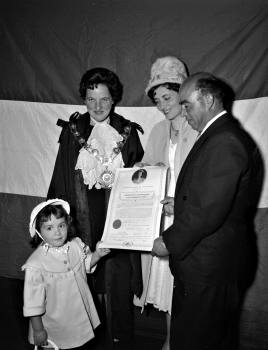 Cr Shirley Burke, and Linetta Vinci with her parents at a naturalisation ceremony, 1962. Courtesy Kingston Collection.

Cr Hawken, the only other speaker on the issue of the questionnaire, pointed out that the local newspaper had given the matter a lot of publicity and said he disagreed with Cr Burke’s interpretation of the results. The fact that only 379 people indicated they favoured the proposal showed that people were not interested. Given this situation and the fact that council had limited borrowing power, which would force the abandonment of other projects he moved that council take no action on building a community centre at Parkdale at ‘this time’. Cr Sambell said he agreed with the sentiment and principle of the scheme but he did not feel the site was right or that the time was ripe for a community centre. Cr Hawken’s motion was carried. [8]

With the news that the council had purchased the Lincoln Mills building in Parkers Road, the Community Centre Committee wrote asking whether any of the facilities originally planned for the centre would be incorporated into the recently acquired building. At that time the council indicated that it had no plans for the building but Cr Hawken made it clear in his comments that the council had no intention of going ahead with the community centre as outlined by the committee and it would be a waste of their time to continue with a plan that council had refused. [9]

Cr Shirley Burke moved that the Centre Committee be advised that, while there was no plan for the immediate construction of a community centre, Council would give consideration to incorporating in the Lincoln Mills building as many as possible of the facilities included in the proposed community centre and further, that council would be pleased to receive the recommendations of the committee in an advisory capacity as to the best ways of utilising the building and the land. The first part of Shirley Burke’s motion about incorporating many facilities in the new centre was passed. But before her recommendation about the Centre Committee’s advisory role was voted on, a supper break was taken. For whatever reason the second part of Burke’s motion was never put to the vote because on resumption the council proceeded to the next item on the agenda. [10]

The planned community centre was never built in Heslop Street. The land was sold but some of the amenities visualized for that property were later provided at other venues. For a time a library was provided from the newly acquired Lincoln Mills building in Parkers Road and many years later a community youth centre was built on council owned land, and a former tip, in Warren Road Mordialloc. The Mordialloc Theatre Group centred its activities on the Lincoln Mills property where a hall with a capacity of 180 people was provided. This hall was later called the Shirley Burke Hall in recognition of her efforts to gain and develop it for the community. An elderly citizens club was later built at Mentone in the Mentone Reserve. In the meantime roads and drainage were constructed giving new young families to the district safer and more appropriate access to their homes. 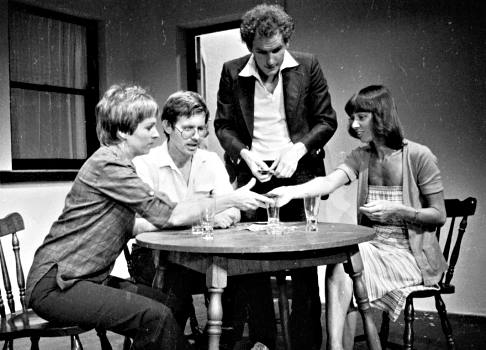 Members of the Mordialloc Theatre Company rehearsing their next production in the Shirley Burke Hall, 1983. Courtesy Leader Collection.