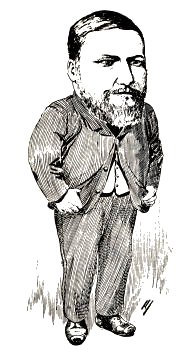 Cr Harold Sparks strongly supported his employer and land developer C H James in efforts to have the West Riding of the Shire of Moorabbin established as a separate shire. In addition he was a vigorous advocate for a horse tram from Picnic Point to Cheltenham through large tracts of land owned by James. These two prospective enterprises were probably the basis of the animosity that existed between Sparks and his colleague Cr Abbott, who opposed severance and initially had strong reservations about the tramway. Both these men represented the West Riding on the shire council of Moorabbin. Whatever the basis for the clash between these two councillors, the conflict generated many words in the local press. 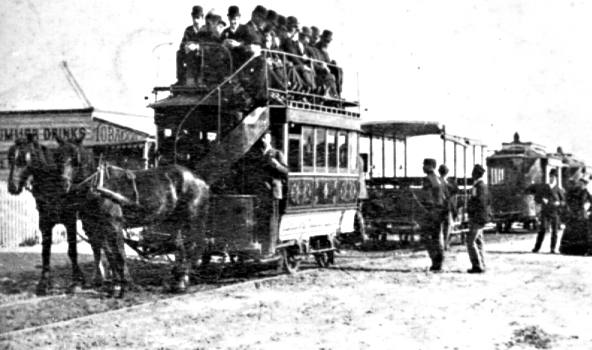 The first efforts to have areas of what are today Sandringham, Hampton, Black Rock hived off from the Shire of Moorabbin to form a new shire failed. This was no doubt a disappointment to Sparks who was perhaps the initiator of the first public petition seeking severance. In August 1886 the issue was raised again when the newly formed Mutual Improvement Society proposed a debate on the issue to be held at a public meeting in the Cheltenham Mechanics’ Hall. It was advertised that Harold Sparks was to argue the affirmative case whilst his council colleague was to present the negative. [1]. The following week David Abbott in a letter to the editor of the Southern Cross indicated it was not his intention to engage in debate on a matter “so vitally affecting the shire”, but offered instead to present a new recitation about a shipwreck at sea as a substitute. He explained his reasons for this. [2]

David Abbott believed, as president of the Shire of Moorabbin, it was inappropriate for him to engage in debate on an issue that had been extensively discussed the year before where the council had resolved that the West Riding should be divided in half, giving the district additional representation at the council table. More importantly, the council had subsequently met with a deputation of prominent ratepayers who favoured severance and reached an agreement that the council would not take any steps towards dividing the riding, and the committee of ratepayers pledged not to take any steps towards severance. Abbott believed if he and Sparks, who was a member of the original delegation, debated the issue they would be breaching that pledge. 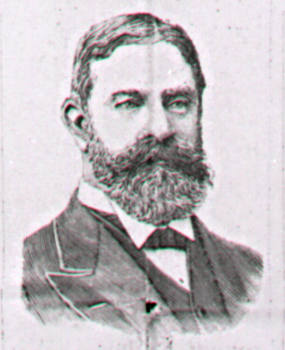 A note the next week in the Brighton Southern Cross informed its readers that the opening debate of the newly formed Mutual Improvement Society was to take place the following Wednesday on the topic “the Severance Question”. [3] Thomas Bent was to chair the meeting at which several councillors had indicated their willingness to express their views. No names of the participants were given and no report was published in subsequent issues of the newspaper indicating whether the debate took place.

The difficulties between Sparks and Abbott intensified in June 1887when Harold Sparks as a shire councillor was present at a council meeting where he alleged the president, David Abbott, made remarks which reflected badly on officers of the Public Works Department. He thought so strongly about the matter that he wrote to R W Markham, the Commissioner for Public Works at the Department, informing him of Cr Abbott’s comments and advised him to seek a public retraction. Sparks claimed Abbott said officers of the Department had “acted unfairly and with great partiality and favouritism to the severance side” and expressed his personal “sincere sorrow that such ill advised and untrue remarks should have been made at the council table.” [4]

The circumstances surrounding the alleged comment were that two petitions were being prepared to present to the Public Works Department. One supported division of the riding into two giving the total area greater representation at the council table. The other supported severance, the creation of a new independent shire. Cr Abbott, an advocate of the former strategy, sought to have signatures added to his petition after its presentation to the Department but was refused permission. Yet he claimed approval was given to an identical request by the authors of the opposing petition to do the same thing. Cr Abbott said he inspected the petition for severance the day after it was lodged and there were 258 names attached but on inspecting the petition some time later the number had increased. He said he would be a hypocrite if he did not believe that the Department had treated the supporters of division unfairly. [5]

On receipt of Cr Sparks’ letter the secretary of the Public Works Department referred it back to the Moorabbin Council for comment. As president, David Abbott replied. He pointed out that all councillors with the exception of Cr Sparks had passed two resolutions. One was that the words imputed to the president by Cr Sparks were not used at the council table, and the other was that a vote of censure had been passed against Cr Sparks for his action in writing to the Public Works Department relative to discussions at the council table. David Abbott went on in his letter suggesting that an officer in the Department was leaking information to Harold Sparks. He wrote, “…twenty minutes before the time you appointed to receive the councillors and ratepayers re the severance petition, a memo containing the reasons for your decision …was placed on his desk, in his employer’s, Mr C H James’, office, and that the reason given in that memo were almost word for word the same as read by you…”. The Public Works Department later rejected this latest charge of undue influence. [6]

The secretary of the Lands Department forwarded David Abbott’s letter to Harold Sparks and invited his comment. Sparks was not slow in replying. The next day, in his letter written from his home in Gipsy Village, Sparks reiterated his recollection of the words used by Cr Abbott and drew attention to what he saw as deficiencies in Abbott’s letter. He went on to suggest the secretary should consult with T B Muntz, C H James, and T Moore, all supporters of severance and present in the council chamber when the damaging words were allegedly spoken. His letter concluded with a nice touch. He added a PS noting that Cr Bent, a powerful and forceful figure in the council, was not present during the alleged offence. Perhaps implying, if Bent had been present he would have straightened the councillors out or the outcome might have been different! [7]

Southerner, in his letter to the Brighton Southern Cross, struck out at the notion that Sparks’ letter to the Public Works Department was underhand. Rather he saw it as manly behaviour, giving those unfairly attacked the chance to clear themselves. “Great Jehosoiphite (sic) is it a crime to speak of what is done at a council table?”, Southerner asked. “Is the Moorabbin Shire Council Hall another star chamber?” [8]

The Cheltenham Leader hit out at its competitor, the Brighton Southern Cross, suggesting in its reporting of the Sparks/Abbott saga it was trying to convince its “small circle of readers that the majority of the councillors of Moorabbin, were a set of fools, the President a perverter of truth, and Mr Sparks a paragon of perfection.” [9] Southerner also received some attention by the Leader suggesting he left out some crucial words in repeating what was said at council meeting when Sparks was reprimanded. It was a despicable effort on the part of Southerner to strengthen his argument, the Leader claimed. The conclusion the Leader reached was that Cr Sparks acted most unwisely in turning “tattler and informer” and offered the advice that if councillors had any dirty linen to wash they should do it at home.

It was in the Brighton Southern Cross of July 1887 that it was announced that David Abbott had retired from his position on Council to leave almost immediately on an overseas tour. In the same issue of the paper a public meeting called by Harold Sparks in Cheltenham was reported. There Sparks told his audience that he was not going to discuss recent occurrences in Council as he had published relevant correspondence in the Brighton Southern Cross so they could make their own judgement. Rather he spoke about general as well as personal matters and expressed disappointment that those who had attacked him behind his back were not willing to do so on a public platform. Such men he said he scorned and were beyond contempt. A vote of confidence in Cr Sparks was passed unanimously as no one accepted the chairman’s offer to express dissent. [10]

A little more than three months later Harold Sparks announced his resignation from Council and abruptly left the council chambers despite the plea of the president, Cr Bent, that he should remain. This petulant withdrawal came as a great surprise to his colleagues. Sparks was observed to have said as he retired that he could no longer remain with such a shabby rowdy lot. He no doubt felt under pressure from his council colleagues and disappointed at his inability to convince them to come to some agreement with the directors of the Beaumaris Tramway Company about a few words in the company’s agreement with the council. The establishment and success of the Beaumaris Tramway Company was an important object with him and one which was superordinate to his interest in severance. While the Leader strongly criticised Sparks actions regarding severance they acknowledged he was energetic in endeavouring to serve his constituents. [11]

The Brighton Southern Cross was disappointed to learn of Harold Sparks’ resignation although they thought it not unexpected due to the turbulence and acrimony that had been displayed against him. They saw him as a most valued member of the municipal organization and a person whom had a great deal to do with the progress and improvements achieved in the district. David Abbott, named only as the ex-councillor, was criticised for his emotional opposition to many ideas put forward by Sparks rather than reasoned argument. If the council as a body had acted with more dispassion about the ideas presented the results, the Southern Cross claimed, would have been different. [12] The paper wished Sparks well in his retirement and offered their sympathy. Nevertheless, they welcomed the extraordinary vacancy as an opportunity for someone to step into the breach to facilitate the district’s progress. It was ironic that the vacancy was filled by David Abbott who had returned from his overseas tour to resume a position on Council for another ten years. [13]