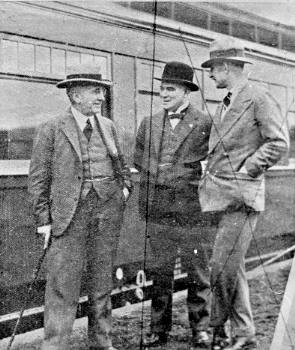 In 1907 it was described as “surely one of the cheekiest burglaries on record”. Thieves entered Dr Weigall’s property on September 6th at 10.45 at night and stole motor parts, lamps, tools and a Eureka bicycle valued altogether at £42 10s. The Brighton Southern Cross reporter wondered whether they would return to take the car. [1] Dr Gerald Weigall was a general practitioner living in a weatherboard house he had built in Charman road between the Cheltenham State School and Glebe Avenue.

Dear Mate, - I and my mate reckon that if you give us £12 for them things, you can have them. Old Sol will only give us £9, so if you give us £6 each they are yours. If you will deal, put a note in “The Age” under the heading “Traveller” in the Missing Friends column –
(Signed) Traveller.

The doctor showed the letter to William Baxter a motor expert of Brighton and asked him to reply to it. This Baxter did and in return received a telegram asking him to meet outside the Melbourne General Post Office on September 23, at 3.30 p.m.

Outside the post office he meet Thomas McMahon, a person who he knew casually, and in discussion mentioned that he was there to meet someone he did not know but who called himself ‘Traveller’. McMahon commented that he had seen where Dr Weigall had been robbed and said, “How am I for the Man?” Baxter asked him if he had committed the robbery and McMahon answered, “I did not do it but I got someone to do it.” He then showed Baxter a plan where the stolen ‘stuff’ was to be found in the scrub at Cheltenham. [2]

Baxter in the presence of McMahon telephoned Dr Weigall, told him of the location of the stolen goods, and agreed to wait twenty five minutes while the doctor retrieved his property. Weigall reported that he had rescued all the articles excepting the bicycle, and a motor wheel cover. At this point McMahon asked that he be paid £6 or £8 instead of the whole £12 as some of the stolen goods had not been recovered but Baxter refused. Baxter told McMahon that the doctor declined to pay. As the two men left the telephone office Detectives Lonsdale and Ashton approached and arrested McMahon taking him to the police station where he named Allen as the person who committed the crime.

Thomas McMahon had been employed for eight months by Dr Weigall as a groom. He told Detective Lonsdale that the doctor “had not treated him very well in regard to a situation he applied for” and he wanted to get even with him. “I did not commit the robbery myself. I met a man named Allen, and we were stiff, and wanted to make a rise, and I told him about Dr Weigall’s stuff, and how to get it and he agreed to do it. We were to go halves in the proceeds. I put up the job. I suppose I will get three years for it.” [3]

At the Cheltenham Court McMahon pleaded not guilty and reserved his defence. He was committed for trial at the Criminal Court on October 15, 1907. Bail was granted with one security of £100 and two of £50 each. After the court hearing at Cheltenham the doctor and Detective Ashton accompanied McMahon into the scrub and retrieved the missing tyre while at the same time giving information as to where the bicycle might be found. [4]

At the conclusion of the court case against McMahon, Dr Weigall applied to the court for the restoration of his motor lamps and fittings that were in the court for the purpose of identification. Police Sergeant Jordan opposed the application, arguing that the items were needed as exhibits in the Criminal Court presentation. Dr Weigall, protesting because to replace the car lamps would cost him £10, asked what would happen if he was found driving at night without lights. The police sergeant replied that they would not be hard on him and the Bench refused the doctor’s application. [5] But all was not lost. The doctor, as a crown witness in the case, claimed his expenses which Sergeant Jordan supported, giving the doctor a minor victory.