In 1851 Mary McKnight came to Cheltenham with her husband James, and her nine months old son, George Robert. Born in Glasgow to Robert and Margaret Miller, she married James McKnight at Paisley in Scotland in 1849. Shipping records indicate that both individuals could read and write, and as part of their possessions they had a copy of the Bible when they commenced their arduous journey. 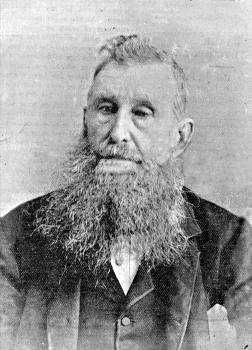 After arrival in Melbourne on May 2, 1851 and following a short stay there the family moved to Cheltenham, taking up their initial residence in a tent on twenty acres of land on Arthur’s Seat Road, now Nepean Highway. They called their new home Dendron Lodge. The land was purchased from Francis Dawe Wickham on November 20, 1852 for £140. Its boundaries today correspond to Nepean Highway to the West, Warrigal Road to the East and Swinden Avenue and Cobham Street to the north and south. At the time the land was covered with trees that had to be cleared and it was the sale of this timber that provided the family with an income until the land could be cultivated and pasture prepared for the grazing of cattle. Mary and James McKnight were amongst the first Europeans to settle in a district described as ‘wild’ in a report written in 1902. [1]

Mary kept a record of some family transactions in a small six inches by four inches ledger, with brass clasp, which carried the handwritten title, Analytical Geometry. The earliest entry is the statement that “Analysis is beginning to advance its claims in all sciences, and it appears wonderful that a system of proceeding to simplify so much in accordance with common sense, should be so long neglected. Whatever you wish to understand analyze.” Then followed two theorems, ‘the equations of a point’ and ‘the equations of a line’ before several pages were removed and Mary began recording her own observations and family transactions in the remainder of the book. 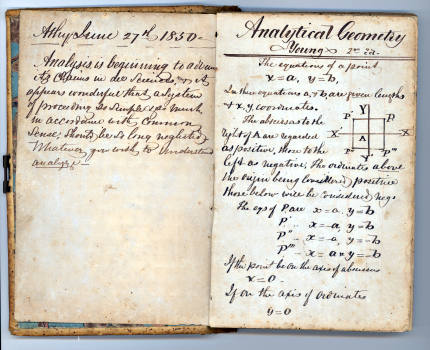 The first section of Mary’s records details income and expenditure commencing in 1855. The first entry relates to A V McDonald from Mordialloc who purchased hay and potatoes from James McKnight. McDonald bought 34 cwt 10 lb of hay at £10 per ton and 6 cwt of potatoes at 7/- per cwt. Mrs King , Mr Robertson, Mr Harper and Mr Kitchen, amongst others, were also clients purchasing butter, wood, onions and peas. By 1863 a load of wood cost nine shillings and six pence and two cwt of potatoes twelve shillings. A pound of butter was two shillings and six pence. On the other side of the ledger Mary showed expenditure of eight shillings to Mr Robertson to have the “mare shood” and noted that Mr McClellend was paid for cleaning the water closet in 1863. An entry for March 23, 1864 records £15 being lent to Mr Le Page and there is an undated subscription list for Miss Gott, the teacher at the Church of England School No 127 in Silver Street. These subscriptions may have been to pay the teacher’s salary, provide for maintenance on the school room, and assist in the purchase of equipment and books.

Nestling amongst the financial records is a recipe for ‘Ginger Bear’. Eight ounces of ginger was added to six gallons of water together with lemon essence, white of eggs, yeast, cream of tarter and castor sugar to make this thirst-quencher. 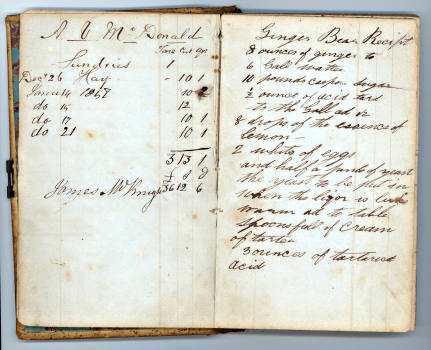 The final section of Analytical Geometry consists of diary observations, often a single sentence with records not being made every day. The first entry is for August 18, 1865 when Kattie, Mary’s eldest living daughter, told her mother about “bad talk at school”. Mary approached Mr Gott, the father of the teacher, but believed he went about the matter in “the wrong way”. Miss Gott questioned the girls concerned and in Mary’s view unjustly blamed Kattie. Mary accepted the advice of her friend, Mrs Goldstone, and approached Miss Gott on August 24 for an explanation but was accused of interfering. Moreover, she was informed that Kattie had taken a testament from the school. As a consequence of this both Mary and James gave Kattie an “awful beating” and resolved not to send her back to school.

On August 29, Mary wrote that Miss Gott sent her a letter asking for forgiveness as Kattie had been falsely accused and asked that the girl be sent back to school. This the McKnights were not prepared to do. Mary wrote, “we sent back word that we could not think of sending her back again after the injustice she had shown to Kattie.” However, Miss Gott was not so easily put off; she called in on the McKnights the same evening and declared she would not leave until they had forgiven her. As she said she was all in the wrong, Mary wrote, “Father consented to let Kattie go to school again.”

On September 12 James went to Mrs Le Page to get a black vest made and Miss Gott visited to see about her school. The next day Mary wrote that her husband had gone to the opening of the Court of Petty Sessions at the Mechanics’ Institute. The previous days had seen the sowing of onions around the well and two hundredweight of potatoes had been planted along with bone dust. Later days saw attention being given to weeding and the planting of celery, carrots and parsnips. There are several occasions noted when James went to town to obtain “dung”. 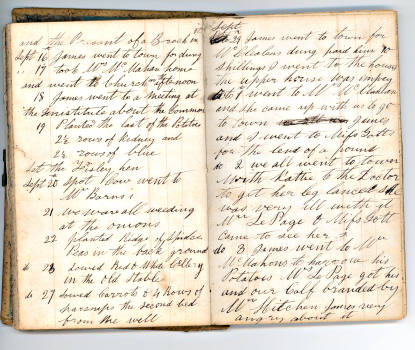 The entry for October 3 noted that Mr Le Page had his calf and a calf owned by James McKnight branded by Mr Kitchen. James was very angry about it. Two days later, Kitchen called in an attempt to settle the matter.

For three days, October 10, 11, and 12 Mary recorded that she was weeding onions. The next day James dug 142 pounds of potatoes and 94 pounds of small potatoes. He was again digging potatoes on October 21 and 27.

On November 6 the record shows that Mr and Mrs McMahan came to ask James to bail out their son from gaol. The boy had been arrested and placed in the watchhouse for riding a horse that was not his own. The next day James, in the company of Mr Le Page, went to Brighton to arrange the bail but were too late. According to the entry James returned home very ill.

James spent the next day in bed but improved a little after Mary gave him and son George a ‘vapour bath’. Nevertheless he was still very weak. Mrs McMahan called to see about her son and went to the Le Pages to borrow money. The following day Mary went with Mrs McMahan “to Schnapper Point to get her son out of the lock up.”

On November 14, Mary and James went to town and bought son Willie some moleskin trousers and a pair of coarse blankets. Kattie got new boots and James purchased a dark shirt for himself.

Mrs McMahan called in on November 15 to borrow two pounds and promised to pay it back before the twenty-first of the month. Four days later Mary visited the McMahans to see how their son fared at the court. He was fined £5. The two pounds borrowed was returned but after two days Mrs McMahan returned attempting to borrow £5. Mary’s note said, “we could not give it to them”.

On November 28, Mary with James, Kattie and the baby (Mary Ann), went to town. Mary recorded all her purchases. James was bought two flannel shirts, trousers and vest, Willie got new trousers, Kattie kid boots and for herself she bought a silk umbrella and a muslin dress. On the same day they visited Mrs Aitken and left two chairs to be mended and bought china cups, saucers and plates as well as knives, forks and tea spoons. Eight days later Mary McKnight made her last entry in Analytical Geometry. On that day her husband had visited “Mr Francis to pay Mr Lay for finishing the Institute”. 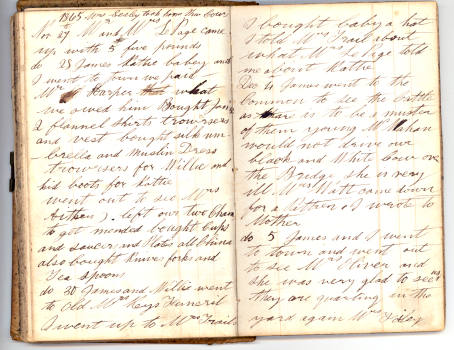 Although only covering a short period of time Mary’s record gives some indication of the life and concerns of pioneering women. Why Mary ceased making entries is not known but she was suffering from tuberculosis and became pregnant with her ninth child in 1866. The child, a boy named James after his father, died shortly after birth on April 5, 1867. Mary, herself died eight days later aged thirty five years and was buried in the Cheltenham Cemetery. Her husband continued to raise the remaining five children, while living and working on the property on Point Nepean Road. He died on August 5, 1902 and was buried with his wife.