It was 1916. Australia was at war with Germany. Nurse Cavell, a British nurse, was shot by the Germans on October 12, 1915 for sheltering allied soldiers in a Red Cross hospital in Brussels and helping them to escape to neutral Netherlands. The deaths of Australian soldiers were being reported in the local press and wounded troops were returning home. It was in this context that the local friendly societies decided to organize a carnival to raise money to support those discharged wounded soldiers who were attempting to return to civilian life.

The organisers of the event, the Moorabbin United Friendly Societies, having received the patronage of the Victorian State Government and the Moorabbin Shire Council hoped to attract a large crowd to the carnival at the Mentone Recreation Reserve on Easter Monday 1916. The plan was to have a procession of floats from Cheltenham, a program of sporting events on the oval and a concert at night at the Mentone Skating Rink. Several valuable prizes were to be won during the day.

The procession was to commence at 10.30 from the Mechanics’ Institute at Cheltenham and move along Charman Road to Balcombe Road and from there down to the Reserve. On the day the weather conditions were not ideal with a strong wind blowing which interfered with some of the floats. Mr G T Allnutt the parade marshal, dressed and mounted as a British general had a difficult job getting the participants in order. Apparently some of the entrants waited until the last minute to join the group in order to prevent rivals copying their displays.

Participants outside the Cheltenham Mechanics’ Hall waiting for the parade to commence. Courtesy Helen Stanley.

Shortly after 11.00 the procession started with the Cheltenham Brass Band augmented by members of the 46th Area Band under band master Harry Hastings leading the way. The friendly societies then followed; AOF, IOR, HACBS, PAFS and ANA. The Protestant Alliance Friendly Society had two entries in the parade, “The Murder of Nurse Cavell” and a fruit and vegetable display. The Australian Natives Association in addition to their vegetable and fruit display had a tableau entitled “Burke and Wills at Coopers’ Creek”. Another tableau named “The Black Watch” was arranged by H White and friends at Mentone. Added to these vehicles were bakers’ turnouts from G Rose, J Geary and H McKenna, and tradesmen’s wagons from A Follett, C H Fairbank, Abbott & Mason, F Bunce and Moorabbin Cooperative Society. There was also an undertaker’s hearse from Rose Bros. Members of the 1st Mordialloc Troop of scouts were also there in large numbers. 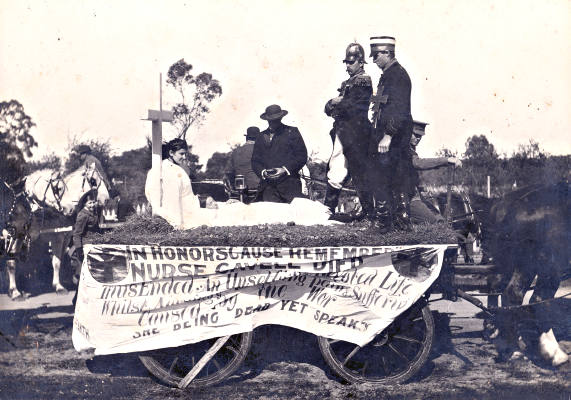 H McKenna won the prize for the best baker’s turnout while A T Follett gained the prize for the milkman’s turnout. C H Fairbank held off the challenge from a strong field to win the award for the grocers. J Marriott from Moorabbin won the market gardener’s award. Other awards were won by T Dempsey, by the Moorabbin Cooperative Society for decorated vehicles, and by R Tilley for the best decorated bicycle. The best tableau from a friendly society was won by the PAFS with their portrayal of Nurse Cavell. That society also won the award for the best display of products.

At the reserve a series of races were held including a one mile walking event, a trotting race, a race for bandsmen, a maiden race, boys’ under 14 race, girls’ under 14 race, married ladies’ race over 75 yards, and a single ladies’ race over 75 yards. In addition, there was a football kicking competition and another for bowling at a wicket. The local paper reported that some races had to be abandoned causing some disappointment but the reason for the abandonment was not given.

During the day there was a display of field ambulance work by the Moorabbin Division of the St John’s Ambulance Brigade. This took place in a roped off area where several boys scouts played the role of soldiers wounded in battle. Each had a notice attached to his tunic informing the first aid team of the extent and nature of his injuries. Apparently they received prompt and detailed attention from the ambulance workers who also, during the course of the day, assisted a few real patients with minor injuries.

The concert at night at the Skating Rink disappointed many of the audience because some of the advertised artists did not appear. Nevertheless, what was offered was well received. Two soldiers, Sergeant Bottomley and Private Warburton, gave vivid presentations on the landing at Gallipoli, competing for a prize offered by the management for the best speech. Sergeant Bottomley won the £1 1s prize but the local newspaper reporter thought it hardly fair as the sergeant had had a great deal of experience in public speaking as he went around the district recruiting volunteers to serve in the army. All the same Private Warburton was said to have come ‘a good second’.

Overall the day was rated as being a great success. Approximately £140 was raised for the, Discharged Wounded Soldiers’ Fund. Much of this financial success was due to the work of a ladies’ committee of forty people. They solicited donations prior to the carnival, sold refreshments on the day and benefited from the sale by auction of the fruit and vegetables which under the conditions of entry to the parade became the property of the committee. Mrs G Brownfield the president of the committee, and Mrs W Rich the honorary secretary, were singled out for special praise for their contribution.

The organising committee for the carnival consisted of about 30 men lead by Mr C R Ashby as president, Mr A A Walsh as honorary secretary, Mr A Morgan as honorary treasurer. Mr G T Allnutt and his son Albert were both indefatigable workers and the procession judges Cr Stone, Cr F Groves and Mr Woodmason had the difficult task of selecting the winners in the procession.