Chelsea Versus the Umpire in 1920 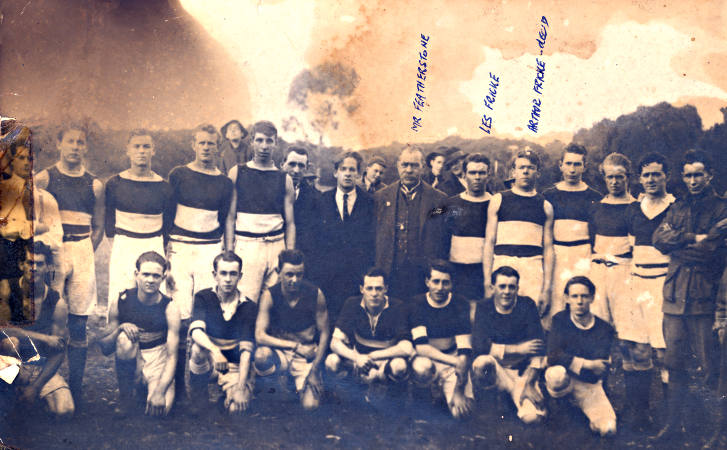 Chelseafoot: Members of the Chelsea Football Club Junior Team – Under 21 wearing blue jumpers with broad white stripe. 1921 Photograph taken after Chelsea claimed the premiership when the game was abandoned because of a big fight. Courtesy Chelsea and District Historical Society.

‘Up There Cazaly’ was the cry at that time. That motivating call to action from the Great War era symbolises Australian Rules football with its fondly promoted heritage of a game noted for its fair play, spectacular leaps and heroic deeds. Cazaly is sung about as an icon in a golden period of noble football heroes. With no disrespect to Cazaly the reality was often quite different. Let us re-visit a series of incidents that affected the Federal Football Association, a southern bayside competition, in its second season after World War 1.

The Federal Association in 1920 brought together football clubs that were south of Glenhuntly along the Frankston line, including also a couple of teams within a short buggy ride either side of that steam train route. Chelsea was the southernmost team. It was also to prove the most troublesome.

The clubs that visited Chelsea in 1920 often endured rough games where the home side and their supporters made life tough for the opposition. Verbal abuse, playing the man, and physical attacks outside the rules of football were reported on several occasions, but it all came to a head as the season neared its end. An umpire with the ordinary name of Smith became the centre of an extraordinary confrontation after an ugly game between Chelsea and Moorabbin on the last day of July.

A few weeks prior to this nasty episode, after a game involving Chelsea, Smith submitted a report to the Federal Committee in which he named a Chelsea player who also happened to be the club’s official delegate to the Federal Association. Chelsea’s Mr McCauley, he said, had indulged in ‘unseemly conduct’ on the field and, after due consideration of the facts, his club was fined ten shillings and sixpence. The matter did not end with that penalty, as Smith was to learn when he was appointed to umpire the Chelsea-Moorabbin match at Chelsea shortly after his report had named the southern club. Umpire Smith had to deal with a dangerous situation.

The locals turned up in force for the Moorabbin encounter, determined to support their team which they believed was likely to be picked on by an umpire who had singled them out unfairly. McCauley had, in all likelihood, let it be known he was not keen on umpire Smith who had reported him. As Smith came out of his dressing room to begin the match he found McCauley standing near the door in an insolent pose taunting him with smart remarks. Worse was to follow. The crowd howled a hostile greeting as he took the field. Amid much bad language he heard a man call out, ‘You settled McCauley. We will settle you, you—’. When the game began the first quarter was filled with rough incidents where Chelsea players vented their anger with violent charges and whacks that landed on their Moorabbin opponents, sometimes behind play. Umpire Smith warned the Chelsea team members at quarter time that unfair tactics would not be tolerated.

The warning only incensed the Chelsea players who disputed every umpire’s decision from then on and threw the ball into Moorabbin players’ faces on two occasions when free kicks were awarded. A Chelsea player was seen to kick violently in packs to the danger of opponents, while the sly fists and the bad language added to the ugly atmosphere. Laidlaw, a well-built Chelsea player, picked on the smallest Moorabbin team member and roughly dealt with him throughout the second half. Moorabbin players were thrown to the ground in the roughest possible way as the game threatened to develop into an all-in brawl. With Moorabbin ahead narrowly in the last quarter the physical attacks became frightening and the umpire lost control.

Minutes before the final bell a vicious incident provoked an eruption of violence. McCauley, angered by some decisions, struck umpire Smith and this cowardly act was followed by another when Johnston of Chelsea also hit the umpire, in the mouth. The game then ended with Moorabbin winning by a goal as a wild, milling pack of players and supporters surrounded the umpire, some trying to attack him while others shielded him from the aggressors. Moorabbin players, led by Dawson, an off-duty policeman, managed to protect Smith long enough for him to enter the change rooms. Dawson was assaulted by Chelsea players in the process and, as many supporters also joined the fray, both Smith and Dawson feared for their lives.

The crowd kept up its noisy abuse from outside the rooms and when the Moorabbin team members managed to get Smith into a buggy a wild throng pursued the vehicle pelting it with various missiles. Those protecting the umpire decided to drive to Mordialloc in order to escape from the danger but the mob followed in other vehicles. When Smith arrived at Mordialloc railway station he was again assaulted. Someone alerted the local police who attended and detained two men before the angry crowd dispersed.

A week later the Moorabbin News ran an article headed:

The Federal Football Association committee met during the days after the fracas and charged the Chelsea club and three of its players with various offences relating to the Moorabbin game. Many witnesses were called. McCauley, the main culprit in causing the brawl, gave a distorted version of the incident, saying that the crowd was unmanageable and that Chelsea officials had actually escorted the umpire from the ground. He said nothing of his own assaults on Smith and his cause was not helped when the vice president of Chelsea, Ellis, confirmed the truth of umpire Smith’s report. Ellis said Chelsea had some good sports but a few hotheads who should not be in the game. He also said that Chelsea attracted a lot of ‘weekenders’ from other places and these ‘half-drunk fools’ came to the Saturday games to incite violence. Other witnesses supported the umpire, placing the blame squarely with the Chelsea players and supporters..

The Federal Association suspended Chelsea for the rest of the season and banned its players, McCauley, Johnston and Laidlaw, for life. It also granted umpire Smith one guinea for expenses relating to his injuries.

The matter did not close with that action. The president of Chelsea Football Club, Councillor Oliver of the newly formed Chelsea municipality, took out a Supreme Court injunction against the Federal Committee’s ban on the club, pending an appeal. This allowed the club to play one more week in its fixture against Heatherton. The Chelsea president also intimated that the club would fight the suspension in the courts. The Federal Association had no option other than to defend the penalties it had dealt out, so the scene was set for a legal battle. It did not occur. When the Chelsea connections discovered that the cost of such a court action would be over 100 pounds per day, then a huge sum, they met the football authorities and agreed to withdraw the threatened legal proceedings.

Chelsea, protected by the injunction, did play Heatherton the week after all this drama. Heatherton received a heavy beating, doubtless being relieved that it was confined to the scoreboard. But it was Chelsea club’s last game of Federal football for some time. In 1921 its senior team folded, probably because of internal differences over the player behaviour, but the club fielded a junior side in another competition. Chelsea returned to Federal football in 1922 when the association’s committee re-admitted the club without any fuss or any restrictive conditions. The team finished in the middle of the ladder, winning many games convincingly with no reports of fights or suspensions..

In retrospect the unfortunate and uncivilised behaviour of people at Chelsea on the day of the Moorabbin match gives an insight into the narrow tribalism of suburban life at the time. Neighbouring towns often were bitter rivals. Petty jealousies could easily boil over into violent acts, as described above. Although there can be vicious incidents in sport at times in our modern era, parochial attitudes in the suburbs have mellowed and rarely develop into scenes that border on serious civil disturbance as this one did. Violence of this sort is a rare occurrence now in Aussie Rules matches, although ethnic tensions still cause problems in Melbourne soccer competitions. Around the time of World War 1 there were several cases of Australian Rules games being called off because of unruly, violent behaviour of players and spectators at suburban games. The Federal Football Association discussed this problem often in 1920 and the following year it took action. It appointed umpires affiliated with the VFL for the first time, eliminating the problem of using local umpires who could be alleged to have biases. There were also stronger directives exhorting clubs to have fences erected around the playing areas of their grounds so that troublesome fans did not easily intrude on to the field of play. Despite all this the Chelsea-Moorabbin game of 1920 would certainly not be the last violent episode in local football history; the Federal League met its eventual demise in the early 1990s partly as a result of spectator violence.