Today, outbreaks of typhoid fever in our community are rare but there have been several in the past. One was in 1923, another in 1931 and finally one in 1943. The fever is a bacterial infection of the intestinal tract caused by a unique human strain of salmonella called Salmonella Typhi. Death can occur. The germ is passed in faeces and through eating foods or drinking water contaminated by faeces from infected individuals. With the spate of cases in Mordialloc in 1923 there was great debate about the causes of that particular outbreak and who was to blame. Generally outbreaks occur in areas with poor sanitation and inadequate sewerage systems.

The first case reported was that of James Dunlop of Bay Street, Mordialloc on January 23, 1923. Eight days later the Council was informed of the second case, Jean Cameron. By mid April a total of 16 individuals had contracted the disease, most of whom were residents of Mordialloc. Of these cases the majority were females or children; only four males over the age of 21 were on the list. [1]

An initial reaction by some members of the community and the daily press was that the cause of the epidemic was the state of the drains. Consequently, the Council, who were responsible for drain maintenance, was the focus of their anger. Councillors were morally responsible for the outbreak of the epidemic and should assert themselves, one newspaper report suggested. [2] Cr Downe acknowledged that Council had an obligation “to ratepayers to keep the drains clean” but also pointed out that, “ratepayers had an obligation to keep their premises clean and not contaminate the drains with offensive material.” Moreover, there were some mitigating circumstances as councillors reminded residents that the Borough of Mentone and Mordialloc had only been in existence as an independent authority for three years and much of that time they had been arguing with the Shire of Moorabbin about money matters. Given the uncertainty of the Council’s financial position the banks were not willing to grant them loans with which they could undertake the desired drainage and road works. 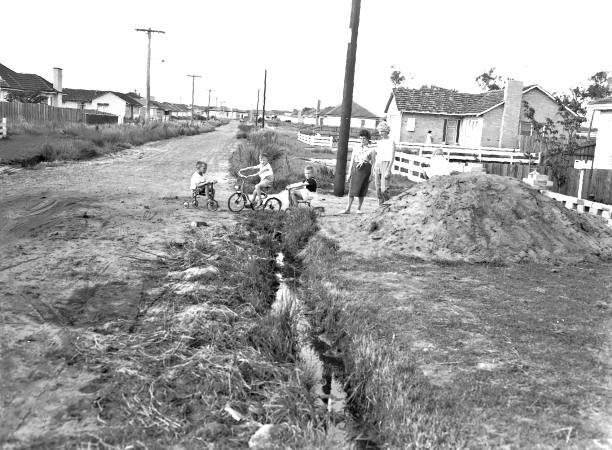 Open drains and unmade roads in the 60s.Courtesy Leader Collection.

Despite this early focus on drains the Council and the health authorities dismissed them as the cause of the epidemic. If drains and drainage were the problem “why were the major contacts women and children, and the men generally exempt?” was the rhetorical question asked. The authorities pointed out that if drains were the source of the epidemic then a significant number of the cases would be located in the lowest, worst drained and most congested part of the town and there would have been a steady rate or occurrence of cases until the winter rains came to flush the germs away. This was not the situation. While it was acknowledged the drains might not have been in the most desirable condition, it was stressed that they were not a contributing factor on this occasion. To add to this statement the Town Clerk reminded people that there was no authentic record of an epidemic of typhoid being ascribed to faulty drainage. History showed that the most usual vehicles of infection were water supply and milk. [3]

The water supply as the source of the virus was quickly eliminated. Most of Mordialloc residents gained their water supply from the Melbourne Metropolitan Board of Works, an authority that served many suburbs in the metropolitan area. If this were the source of the typhoid germ then outbreaks of the infection would be found across a wide area of Melbourne. This was not the state of affairs. Those contracting the disease lived within a one-mile radius of one another. Given this analysis the authorities concentrated on contamination in the milk supply as the offending cause.

It is extremely difficult to establish empirically the exact source of a typhoid infection because it strikes quickly and departs in the same fashion. Generally, by the time the authorities have identified the seriousness of the outbreak the typhoid bacilli is not to be found. Nevertheless, by careful investigation the possibilities can be narrowed down.

The Mordialloc outbreak struck women and children, two groups of people who used raw milk to a greater extent than men. Moreover, by March 16, 1923 a dozen typhoid cases had been identified and ten of those had been supplied with milk by the one dairy - Kerriedale. Dr Featonby of the Health Department said there had never been a clearer case against a dairy. Immediately council officers carried out inspections of the farms supplying the dairy. Most were in the Shire of Dandenong. Blood tests were arranged for farm workers and all except one proved to be negative. Raymond Parsons’ result was positive but doctors from the Health Department quickly pointed out that this did not mean he was the actual infective agent in the current epidemic. He had been inoculated for typhoid during war service, making him liable to give a positive test result. All the same, Parsons gave an undertaking which was accepted by the authorities, that he would not handle the milk but would complete other tasks around the farm.

B Shelley, the Council’s inspector accompanied by his colleague from Dandenong visited several of the farms supplying Kerriedale dairy. His report noted that Parsons’ cows were milked by machine, their tits were not too clean and a milk vat was rusty. At Wall’s property the buckets were found to be rusty and the drainage from the bails and cooler needed to be extended away from the dairy. In contrast McDonald’s dairy received a good report as everything was in very clean order. As a result of these visits Shelley forwarded 14 samples of milk to be laboratory tested.

The Director of the Bacteriological Laboratory, R J Bull, reported that all of the samples contained excremental bacteria, probably derived from cow dung, but was not fussed by this as he considered it normal. More importantly he did not detect any typhoid bacilli in any sample provided.

The circumstantial evidence clearly pointed to the milk supply as being the source of the infection, and not to the drains or inefficiencies on the part of council officers in drain maintenance. However, the farm or farms where the infection originated could not be identified. Cr Blanche believed anonymous writers had unfairly attacked the Council. His colleague, Cr Ryan, contended that the agitation was caused by half a dozen people in Mordialloc, and more particularly an unnamed person “ whose breath was much like a perpetual bad drain.” [4] The actual fuss caused by a few, and the anxiety felt by some, dissipated only to re-emerge nine years later at Chelsea and twenty years later at Cheltenham when the dreaded typhoid bacilli struck again.