Parkdale Yacht Club and Its Clubhouse 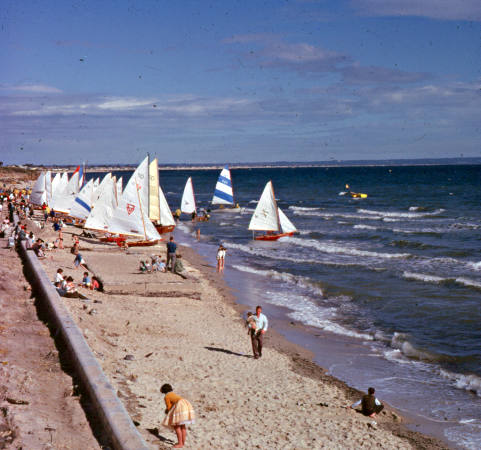 In 1959 the membership of the Parkdale Yacht Club was increasing yet the club was still operating from facilities more than thirteen years old and which could best be described as primitive. If the club were going to attract more young members the club committee knew they had to do something about their facilities. They had several plans but something or someone always seemed to get in the way of putting them into operation.

Following the club formation in 1945 it was given permission the following year to erect a temporary clubhouse on the beach opposite Monaco Street. The building was constructed almost entirely from second-hand packing cases because building material was in very short supply after the Second World War. 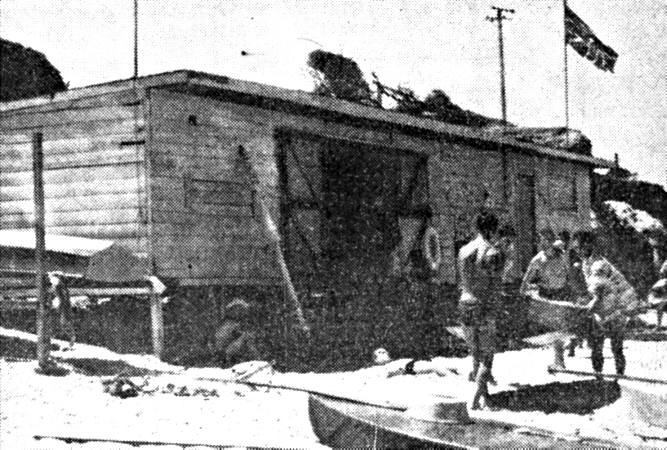 Prior to 1959 club membership had declined but a ‘rebuilding of club membership’ programme had brought more than a two-fold increase in members. This placed increasing strain on club facilities, particularly for the stowage of yachts. The club committee considered several options to overcome the difficulties. One was to gain the lease of the Mentone Baths for use by the club to stow yachts. A second option was to build a new clubhouse, while the third option was to extend the existing temporary facilities.

According to Graham Walker, the yacht club commodore, some six years earlier, in 1953, the club had approached the Mordialloc Council to lease the Mentone Baths and had undertaken to repair them and provide dressing facilities for the public. The council was thought to be sympathetic to the proposal but it was finally rejected on the grounds that the baths were unfit for human habitation and the State Electricity Commission would not permit power to be connected. To the surprise of the club, a fortnight later the baths were leased to a private operator to conduct a kiosk.[1] Representation was again made in January 1959 to the Mordialloc Council and to the Minister of Lands for the use of the baths but neither authority claimed jurisdiction over the site. The council referred the club to the Minister and the Minister referred the club to the council. The club told the local newspaper that they “seemed to be chasing around in circles.” [2] Given this situation the idea of leasing the baths was not a realistic option. 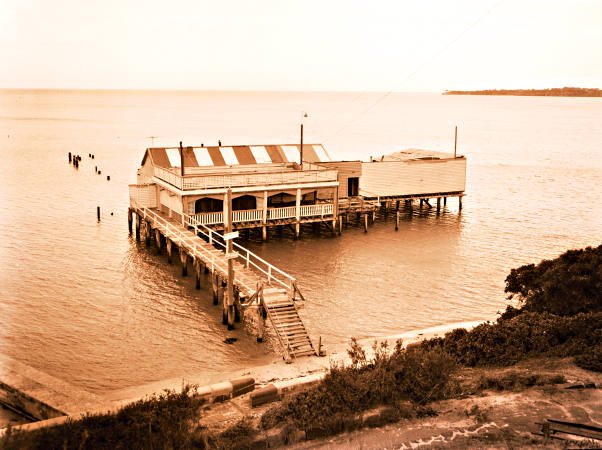 The second option of building a new clubhouse seemed to be the answer when a few weeks later the council agreed to support the club’s application to the Board of Land and Works to replace the temporary structure on the beach opposite Monaco Street with a permanent building. The committee planned to devote £15,000 to the construction of their new brick clubhouse which would have a ground floor of approximately 80ft by 25 ft to accommodate stowage of yachts and equipment together with dressing room facilities. The second storey was planned to function as a dance floor, recreation room and meeting room.[3] A building committee was formed and plans made to raise the necessary finance through the issuing of debentures valued at £5 and upwards.

Two months later it was announced that the Board of Land and Works had refused the club’s application. Cr Hawken told the council that the board had rejected the application because it first wanted to identify and plan future foreshore works.[4] The club informed its members that the Board refused to issue a permit to construct a permanent building until the sea wall was constructed along the foreshore. [5] As a result of this blow by the Board the club committee decided firstly to approach the Board to clarify the situation and seek to have the construction of the sea wall in front of the clubhouse given priority. Secondly, the club decided to pursue its third option, namely to ask the council for permission to extend the temporary clubhouse so they could accommodate 40 boats in the forthcoming season. 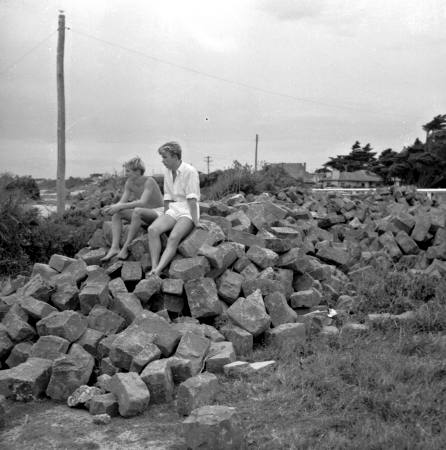 Permission was granted but it was not long before the club was again in ‘trouble’. Two letters of complaint were received by council concerning the extensions and the council’s building inspector revealed that the construction was unsatisfactory. The latter difficulty was resolved when a timber framework was provided for the extension in conformity with the Uniform Building Regulations and the end walls were sheeted with proper vertical board. The original rear wall was moved back to the cliff face and the packing case material used on the roof was to be covered with bituminous felt in a similar manner to that used on the existing building. The letters of complaint were not so easily resolved but they generated extensive correspondence in the local paper.

Mr Wood of Monaco Street, supported with the signatures of nine other people, wrote a letter to the Council condemning the encroachment of the “newly formed Parkdale Yacht Club” onto the bathing beach. He thought it was time that the Council found a more suitable position for a yacht club, one that did not interfere with the limited bathing facilities available to a great number of local ratepayers. The second letter was from the Salvation Army who conducted a summer camp in Monaco Street and whose participants made extensive use of the beach. In this second letter the author while acknowledging scant knowledge about the nature of the building to be erected nevertheless asked the council to reconsider their approval. [6]

When the letters were discussed in Council Crs Shirley Burke and Gertrude McKenzie dismissed them as being paltry and just a storm in a teacup. There were hundreds of yards of sand on either side of the clubhouse and the club only had a small section of the beach they said. While agreeing that the letter writers should be informed that there were other parts of the beach readily accessible Cr Thomson thought the club should be informed that some of their members were “running a little bit wild” and club officials should so something to restrain them. Councillors with the exception of Cr Shirley Burke agreed that a letter about this matter should be sent to the club. [7]

On receiving the Council’s letter the club commodore, Graham Walker, responded with a letter requesting council to receive a deputation from the club and a long letter to the editor of the local newspaper drawing attention to what he believed was a petty campaign inspired by a few petty people in the municipality attempting to discredit the Parkdale Yacht Club.[8] He challenged Cr Wal Thomson’s ‘ unsubstantiated statements’ about member behaviour and drew attention to the connection between the two matters; the club building and the alleged unruly behaviour. Walker agreed that the bulk of the club’s members were teenagers full of energy and spirit for whom the club was providing an avenue to direct this energy into constructive channels. Yet to do this effectively, he pointed out, the club needed facilities where the young people could engage in activities which they enjoyed. He said the club appreciated constructive criticism and advice from council and local citizens but would fight to defend its name when attacked. [9]

Various individuals associated with the yacht club wrote to the editor of the Mordialloc City News defending the club. Maria Mannin believed if the council shook itself out of its lethargy and enabled the new club rooms to be built members would be able to congregate inside and spend their time amusing themselves listening to the radio or playing games. [10] Max Press was disappointed that no person associated with the accusations against the young people of the club were prepared to accept an invitation to attend a meeting of the auxiliary to air their grievances or substantiate their complaints. [11]

In December 1959 a yacht club deputation met with the Council Committee of Reserves and Halls. Graham Walker was joined by five other club members and took the opportunity to raise several matters with the council. They wanted permission to build a permanent club house with provision for a dance floor as well as storage space for boats, permission to build an annexe at the side of the club to be as used as a changing room for female members, permission to have barbecues on the beach, permission to use the hall in Parkers Road for a regular dance and to have room there to use as a clubroom. [12]

By 1961 Graham Walker, as the outgoing commodore, was able to report to club members that the sea wall was about to be built in front of the clubhouse so the efforts of the club to build a new permanent clubhouse, he believed, would soon be realised. There was £400 in the building fund and the committee expected to raise considerably more through the efforts of club members. The forthcoming season looked promising with over 50 boats sailing at Parkdale. There were 20 Vee Jays, 11 Quickcat Catamarana, 10 Sailfish, 10 Sailskis, 3 twelve foot Catamarans and two or three ‘odd boats’. [13] 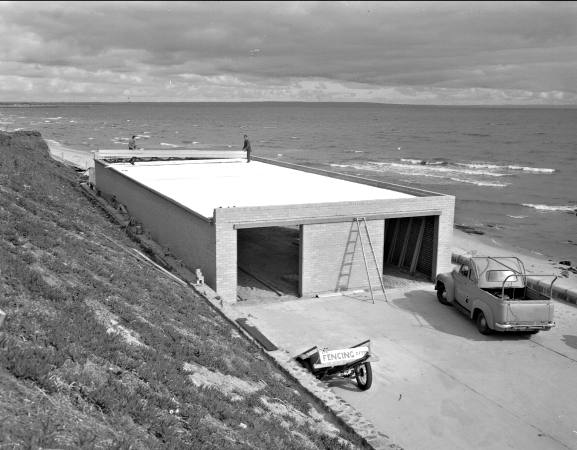 Nevertheless, it was not for some months that the optimistic predictions were fulfilled. The sea wall was completed in the summer of 1962 and the club building was commenced in August 1963 with the hope that boat storage would be available in late October. This was achieved. The Mayor of Mordialloc, Cr Cliff Sambell, on October 27, 1963 opened the bottom floor of the new clubhouse. This area of 90 feet by 30 feet used for the storage of members boats cost £3000. A dream held by many members for many years became a partial reality. The second storey of the clubhouse was added later to complete the vision. 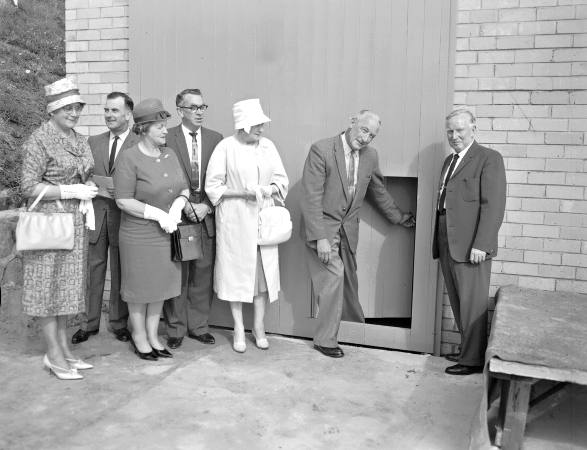