Parkdale Memorials to Those Who Served 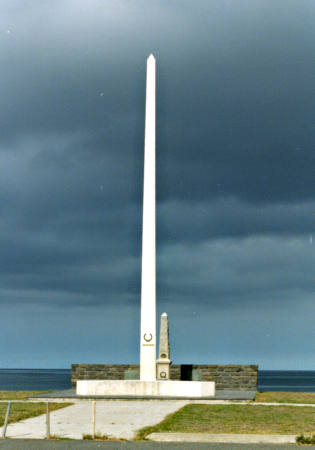 On the cliff top at Parkdale opposite Parkers Road two memorials are reminders of the service and sacrifice made by men in several international conflicts. Differing in style, one is a soaring concrete caste spike covered in fine white granite chips with a simple bronze laurel wreath attached, but no names. The second, a granite obelisk on a pedestal base, inscribed with the names of five men who paid the supreme sacrifice in the First World War together with the message, “Parkdale’s Tribute to Her Fallen Heroes". Today, what was originally designed as a drinking fountain, is encased in two bluestone arms bearing two plaques, one announcing, “The City of Mordialloc Will Always Remember Its Fallen". The second plaque tells the reader that the more recent memorial was unveiled by his Excellency Major General Sir Rohan Delacombe, KCMG, KBE, CB, DSO, KStJ, Governor of Victoria on November 10, 1968.

The mayor of the newly created Borough of Mentone and Mordialloc, Cr Imes, was unable to be present at the official unveiling of the drinking fountain on ANZAC Day April 25, 1923 but sent a message in which he said the memorial would be an emblem for the younger generations to reverence and that they should emulate the deeds of the soldiers not necessarily by fighting on distant battle fields but by living a good, pure and unselfish life. [1]

The ceremony of unveiling the memorial commenced with the playing of the national anthem by the Mordialloc Band followed by a prayer by the Rev J T Evans. The granite structure, draped in an Australian flag and the Union Jack, was then unveiled by O R Snowball, a local politician, and dedicated by the Rev Hennell.

Prior to observing a minute’s silence and the playing of the last post by E Brine, the names of five soldiers who gave their lives in the 1914-1918 conflict were read aloud by Mr Snowball: E Gladstone, H C Jones, J W Morse, C A Sanders, and W C Wigg. 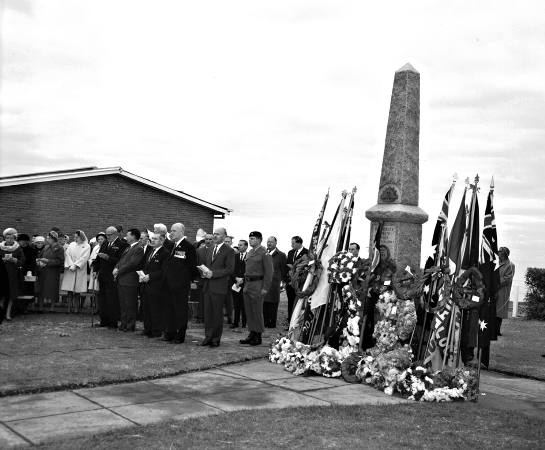 Corporal Ernest Gladstone was killed in action on September 2, 1918, a few months before the armistice was declared. Born in Prahran he was eighteen years old, five feet nine and a half inches tall and single at the time of his enlistment on March 13, 1916. He signed the enlistment papers with a clear copperplate signature. A printer by trade, he had served four years of a seven year apprenticeship. The family residence was in Footscray but in 1918 they had moved to “ Mena" in The Corso, Mentone. Army records show that Corporal Gladstone had two bouts in hospital when he suffered from influenza and trench fever, and on his death was buried in an isolated grave in Peronne Town, 260 yards west of Fork Road. Later his remains was exhumed and re-interred in Peronne Communal Cemetery Extension. His personal effects returned to his father consisted of a watch in a metal case, a damaged metal watch, wallet, cards, photographs, a writing case and a religious book. [2]

Hubert Cromwell Warwick Jones was born near the town of Mayland, Adelaide, in South Australia but at the time of enlistment in the 5th Battalion his address was Albert Park. In military records he was described as having fair complexion with dark hair, five feet five inches tall, he weighed ten stone six pounds.

A salesman of nineteen years eight months he embarked on the HMAT Ovieto on 21 October 1914 and subsequently saw action at Gallipoli. It was there on 25 April 1915 he was reported missing and a month later when his body was found it was recorded he was killed in action. At first his remains were buried in an isolated grave about four hundred and fifty yards south of Anzac Cove. Later his remains were exhumed and re-interred at the military cemetery of Lone Pine, one and a half miles from Anzac Cove. This was necessary because the site of the original grave was exposed to torrential rains and in danger of obliteration by flooding. His parents, living at the time at ‘Carinya’, Como Parade, Parkdale were informed of the move.

Private John William Morse had served two years with the senior cadets before his enlistment on July 1, 1915. He was eighteen years nine months old. His physical description was given as five foot six inches tall, sallow complexion, blue eyes and weight ten stone two pounds. Religion was noted as Roman Catholic. Educated by the Christian Brothers at Abbotsford his occupation was recorded as tent maker. His initial service was with the 13th Light Horse Regiment in Palestine but early in 1916 he volunteered to serve with the Australian Field Battalion as a gunner in France. Later that year he was disciplined for not saluting an officer, a crime which earned him seven days ‘FP’. On September 15, 1917 he was given furlough returning to his duties on the twenty seventh day of that month. Four days later, on October 1, 1917 he was wounded in action and taken to the 2nd Canadian Casualty Clearing Station where he died the next day. Private Morse was buried in the Lijssenthock Military Cemetery 1 ¾ miles South West of Poperinghe in Belgium. His personal effects, letter, cards, photographs, two wallets, metal cigarette case, comb and scapula were forwarded to his parents at “Wavertree", Heslop Street, Mentone. [4]

Driver Clarence Arthur Sanders enlisted on September 16, 1916 and died of wounds a little over a year later on October 2, 1917. When he joined the army he was twenty one years of age, single, and living at “The Wattles" Beach Road, Mentone with his parents. A painter by occupation, he was a driver in the 22nd reinforcements 1st Divisional Ammunition Column of the Australian Field Artillery. He sailed from Melbourne on the HMAT Hororata on November 23, 1916 and spent six months in England training. He arrived in France only six weeks before his death. [5]

L/Sergeant Walter Clarence Wigg was born at South Yarra in 1893 and enlisted at twenty two years of age at Melbourne on July 1, 1915. He joined the 6th battalion of the 3rd Division. He was killed in action on August 9, 1918.

It was on the eve of the fiftieth anniversary of the signing of the armistice of World War One, on November 10, 1968 when approximately four hundred people gathered on the Parkdale cliff top to witness and take part in the dedication and unveiling of a second war memorial, a joint project of the Mordialloc Council and the Mentone and Mordialloc sub branches of the RSL. The Governor of Victoria, Sir Rohan Delacombe, was the chief guest. He said, “Nobody likes war, nobody wants war. But if war comes, it’s the duty of everybody to serve his country to the best of his ability, and if necessary, to take up arms for what we know is right. From this we must not shrink." [6]

Sir Rohan Delacombe was a military man with a distinguished record as a soldier. He joined the Royal Scots in 1926 and saw service in Egypt and Palestine, in addition to other places, and was in an infantry brigade in France. Later he was in Malaya and subsequently in Germany as the commandant of the British Section in Berlin before his retirement in 1962. He was appointed Governor of Victoria in 1963. [7] 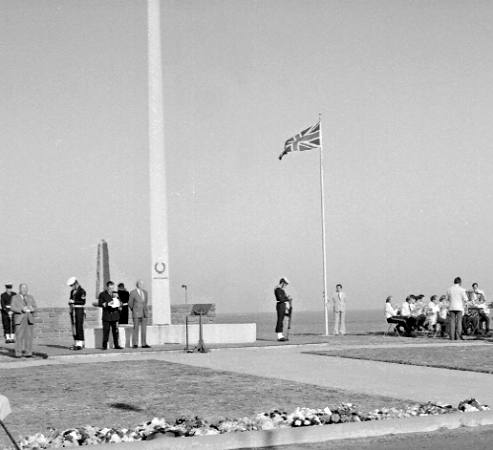 On arrival at Parkdale the governor inspected a guard of honor of one hundred ex servicemen from the Mentone and Mordialloc RSL sub branches before the memorial was dedicated by Fr J English, parish priest of St Brigid’s, Mordialloc and the Rev B Moxon of the Mordialloc Methodist Church. Father English said the memorial had a two-fold purpose. One was to pay tribute to the fallen and the second was to remind those who enjoy comparative peace that the price of peace was eternal vigilance. [8]

A few weeks later, after the dedication, individuals described as vandals desecrated the new memorial. They painted the words “Viva Viet Cong" and “Vietnam explodes Anzac myth" across the base. This followed a similar act at the Mordialloc clubrooms of the RSL, some three weeks earlier, where virtually the same words were used. The Mayor of Mordialloc, Cr Templeton, wondered what prompted people to undertake such action and what satisfaction they got from it. [9] 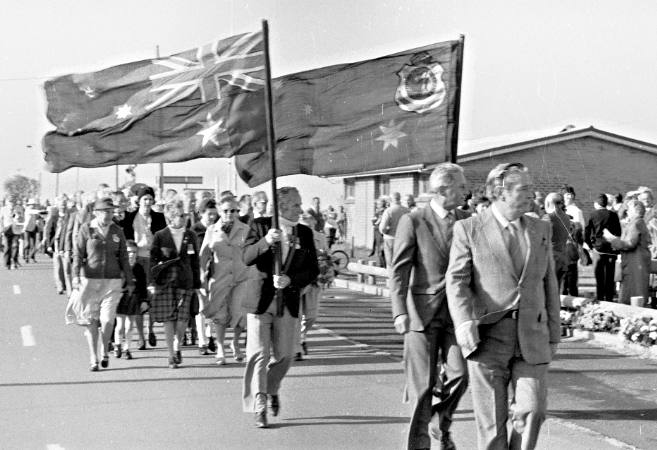 At that time some members of the community were angry with the Australian government involving military personnel in the conflict in Vietnam. Initially, Australian advisers were supplied in 1962 to support the Americans and South Vietnamese in stemming the spread of communism in Asia. In 1965, for the first time, troops were dispatched and in the following year two battalions including conscripts joined the fray. In 1966 the Australians were involved in action near Long Tan where eighteen men were killed and twenty four wounded. During 1969 anti war protests gathered momentum and opposition to conscription mounted. Late in 1970 the Australian commitment began to wind down until January 11, 1973 when the Governor General formally declared Australia participation was at an end. [10]

Today both memorials provide a local focus for those who wish to remember and acknowledge the contribution of men and women in Australian military forces in international conflicts. Formal occasions usually take place on Anzac Day in April and Remembrance Day in November with music, speeches, laying of wreaths and marching by ex-service personnel. But there are also times when individuals place a small flower or tribute in recognition of the contribution of a friend, colleague, or family member in what took place many years ago. 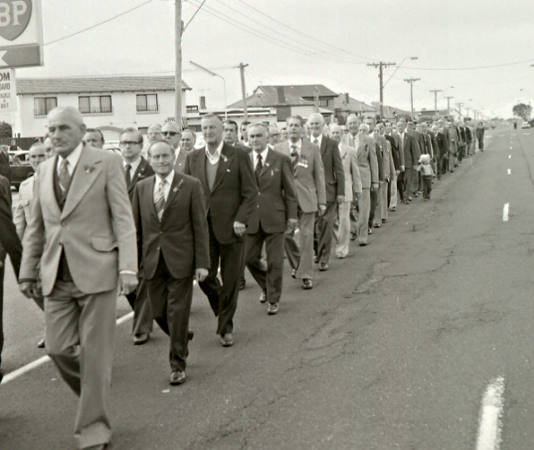