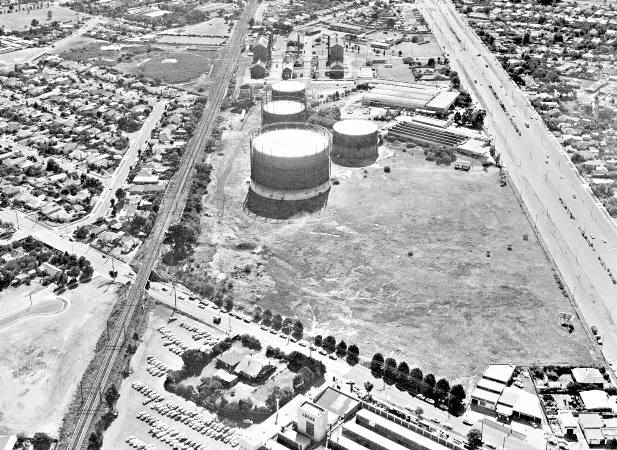 The Highett Gasworks had its beginning in 1939 but its origins stretch back sixty two years earlier to the Brighton Gas Company which was floated in 1877 with a capital of £10,000. [1] Initially, the Brighton company had seven directors, one of whom was local politician, Thomas Bent. All except one, the gas engineer, were local residents. [2]

By 1880 the company was performing well, producing gas of a high quality and providing a handsome return to its shareholders. The company was welcomed by many local residents wanting to replace the shadowy light provided by kerosene lamps with the bright luminance of ‘modern’ gas lamps. The land developers of the day also were supporters because they wanted gas mains laid to their sub-divisions to increase the value of their land and make it more attractive to buyers. But by 1884 the public attitude towards the company changed. Many people were disgruntled because the gas mains had not reached them, others complained about the quality of the gas provided and some were angry because the service was often disrupted.

Gavin Casey, writing to the Brighton Southern Cross, pointed out that on one particular evening he could not read “a good sized type” under two burners in his dining room. When he contacted the company and complained he was informed that the decline in service was due to the great increase in the number of consumers. Not only was this an inconvenience, he suggested, it could cause serious damage to eyesight and compel the public to return to kerosene and even candles. [3]

During the early eighties, with the company operating at capacity, the directors were slow in extending the boundaries of the company’s supply network, preferring to concentrate on the densely populated streets. Weston Bate, Brighton’s historian, suggested the directors were more interested in the profit they received than the acres they served. [4] It was at this time that Thomas Bent chose to resign his directorship and begin agitating for the formation of a new company to challenge the monopolist Brighton Gas Company.

The new company, the Central Brighton and Moorabbin Gas Co Ltd was floated in 1885 with Bent as chairman. Others on the board of the new enterprise included Patrick Egan, a market gardener with 27 acres, and Alfred Hardham, the licensee owner of the Marine Hotel who was also a large landowner. The board also included David Munro, contractor and land speculator, as well as John Ferguson, a merchant with land in Centre Road beyond the periphery of the Brighton Gas Company’s mains, and George Walstab, secretary. Quickly the new company established itself on the corner of Well and Burrows streets and began laying a network of nine inch mains to provide a sustainable supply of gas to all customers. [5]

W K Thomson, chairman of the Brighton Company, at the half yearly general meeting on July 30, 1885 informed the shareholders of a potential presence of a competitor in the market but he tended to down play its significance. While he acknowledged the new company might gain customers in the Picnic Point district he was not concerned because he was aware of the difficulties new companies had in establishing themselves. He recalled the difficulties when the Brighton Company was formed but they did not have to compete against a well established competitor. [6]

At that time Chairman Thomson was pleased with the profitability of the company and confirmed the payment of a six per cent dividend. In addition to making provision for this payment, a substantial balance was placed in the reserve fund to meet future expenditure. This was achieved despite the heavy costs incurred by the company in building a new retort house and other plant as well as extending the mains in all directions. With these developments he expressed confidence in the ability of the company to meet all current and future demands in the manufacture and distribution of gas. [7]

From the point of view of the investor the solution to the ‘unhealthy’ competition was amalgamation. The Brighton Gas Co and the Central Brighton and Moorabbin Gas Company came together in 1887 and for many years enjoyed a monopoly in supplying gas from their New Street Works. It was not until the 1930s that the company expanded its gas production facilities to Highett where it had purchased 45 acres of land adjacent to the Melbourne-Frankston railway line. [9]

A gasholder with a capacity of 750,000 cubic feet was erected on the Highett land in 1927 and connected with high pressure mains to the Brighton works. Three years later the directors of the company decided to proceed with the construction of a new works at Highett, signing a contract for the erection of a vertical retort house and coal store. With the onset of the Great Depression further construction work was suspended for a time but with the upward movement in sales in 1936 the directors decided to proceed with the erection of the first complete gas-making unit. By June 28, 1939 the building program was complete and gas making commenced. [10] 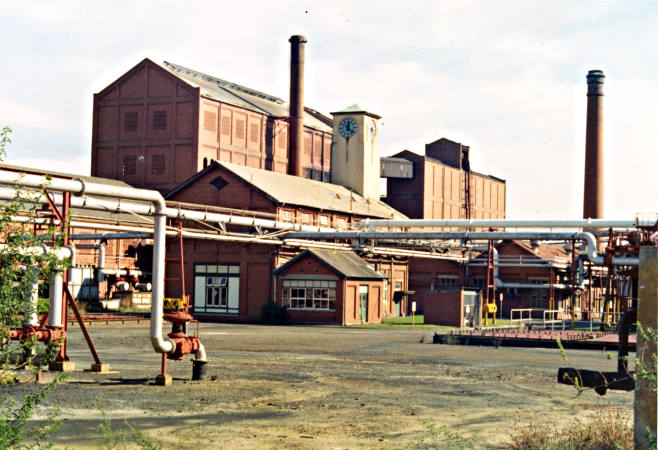 Before the end of World War II plans were made to expand the facilities at Highett. In 1945 the board of the company gained the necessary authority to enter into a £500,000 extension program which five years later was nearing completion. The Premier, J G McDonald, officiated at the opening of the extensions which included a new retort house and coke screening plant with its condensers, scrubbers and purifiers. A new amenities block was also constructed to accommodate 100 men. [11]

The chairman of the company, W A Jack, told the audience at the official opening that the company had a paid up capital of £462,130 with assets of £1,395,000. Its area of supply covered approximately 70 square miles and included the municipalities of Brighton, Sandringham, Moorabbin, Chelsea and part of Dandenong. Gas was also supplied in bulk to the City of Mordialloc. [12] There were 29,770 consumers who were supplied with gas through 300 miles of mains and 330 miles of service pipes drawing gas from its two works at Brighton and Highett, with Highett being the main supplier. On the Highett property in 1950 there were two gasholders; one with a capacity of 700,000 cubic feet and the second with a capacity of 1,000,000 cubic feet. Tenders had been called for an additional 1,100,000 cubic feet holder [13]

The working conditions were praised by W A Jack who pointed to the well designed lunch and mess rooms. He claimed their provision resulted in a spirit of co-operation among employees and drew attention to the cricket oval that had been built almost entirely by voluntary labour. During its early construction phase upwards of forty men worked at weekends with tractors, trucks and wheelbarrows levelling and tidying the ground. As a result during the summer months the oval was used every weekend when matches were conducted between various teams drawn from different sections of the company and with outside teams. [14] The company also fielded a team known as Gascor in the Federal District Cricket Competition.

It was during his speech announcing the new plant officially opened that the Premier told the audience that he was also opening a new era in the gas industry of Victoria as the previous day he had introduced into parliament a Bill to form a Gas and Fuel Corporation. The new bill brought together the Brighton Gas Company and the Metropolitan Gas Company. This new corporation was created to supply Victoria with gas using the large brown coal deposits in Gippsland, thus making Victoria independent of interstate supplies of black coal and freeing it from the effects of miners’ strikes in New South Wales that had occurred previously. Originally the Highett plant had been designed to operate using the best quality Maitland coal but since that time the quality of black coal available had deteriorated forcing the company to undertake expensive extensions to maintain the level of supply. [15] 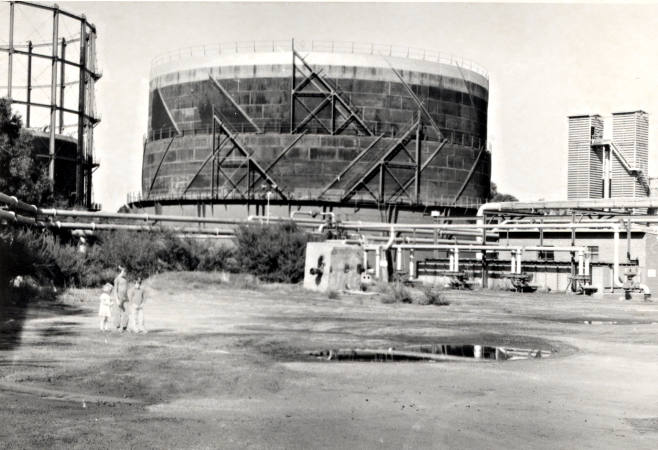 In 1965 potential changes to arrangement for the production of gas and its distribution were imminent with the discovery of a source of natural gas in Bass Strait. Four years later, in 1969, Esso Australia and BHP commenced production. The gas was transferred from Bass Strait by pipelines to the Longford gas processing and oil stabilisation plants near Sale, and the Highett facilities became part of the distribution network. [16] However, some of the facilities at Highett became redundant when the conversion of gas appliances in 450,000 homes to natural gas was complete.

The Moorabbin Council, realizing that much of the land used at that time by the Highett gasworks would not be needed, indicated its willingness to purchase some of the surplus land. The Council wrote to the Gas and Fuel Corporation informing it of its interest in eight and a half acres of land adjoining the recreational area already owned by the Council in Graham Road. A spokesman for the Corporation replied that the sale of land had not been discussed but he was sure the Council’s request would be given sympathetic consideration when the future of the site was decided. But he also indicated that he thought this would not occur for some time. [17]

Almost two years later, in 1971, the Corporation had not made any decisions about the future of the land although the Town Clerk made it clear the Moorabbin Council wanted ‘a slice’. Rumours were circulating locally that developers were interested in the site and G J Coles executive reportedly said that as much as they would like to they had no options on the site. The 46.5 acres of land was valued at $3.5 million with the most expensive section fronting Nepean Highway. However, this was not the area the Council wished to gain. They wanted land on the other side of the railway line adjacent to Graham Road for recreational purposes. [18]

It took a great deal of time and lengthy negotiation between the Council, the State Government and the Corporation before the future of the Highett Gasworks site was resolved. Eventually however, the Moorabbin Council was able to obtain ‘a slice’ to provide additional recreational facilities for the municipality. 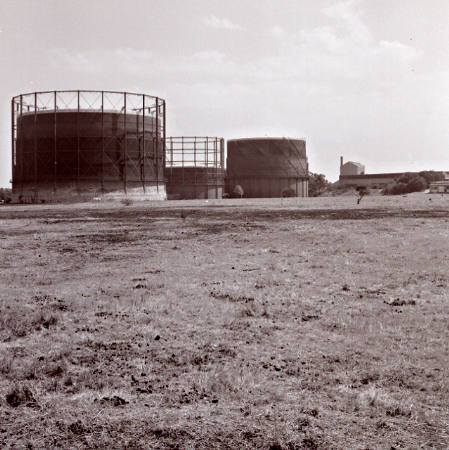