Explosion and Fire at Highett 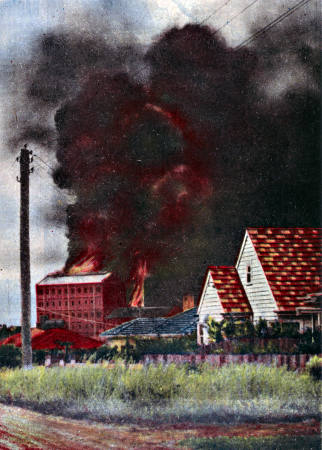 An explosion rocked Highett shortly before noon on Friday, December 13, 1952. The centre of the action was the gasworks. Newspaper reports said there were flames leaping hundreds of feet into the air and dense black smoke cast a pall over the surrounding area for over a mile. A thick column of smoke could be seen as far away as the city and Frankston. The smoke and noise attracted many pedestrians, and drivers stopped their cars on Nepean Highway to observe the fire unaware of the potential danger inherent in the situation. Three police patrol cars with crews were sent from Russell Street to help untangle the traffic as cars with headlights blazing in the smoky gloom attempted to negotiate the congestion that stretched for two miles between Cheltenham and Moorabbin. The Moorabbin News reported that vehicles were four abreast on the highway and in Graham Road. Trains were delayed for up to fifteen minutes because of the danger created by sightseers masked by smoke crossing the railway line to get close to the action. [1]

Police said the smoke and explosion was caused when a tar dehydration tank on the side of No 1 retort house burst into flames shortly before Friday, midday. The tank boiled over, splashing hot tar onto red-hot clinkers or ash which had been emptied earlier from a furnace. [2] As a result there was an explosion which ignited the tar in two tanks. The fire was within 150 yards of two gasholders storing thousands of cubic feet of gas and threatened to ignite thousands of tons of coal stored in bunkers. Fortunately, as Mr Watson explained, the wind was from the south minimizing this danger. “If the winds had been blowing from the north-west the flames would have reached the main and blown the whole works ‘sky high’.” [3]

Employees of the gas company acted swiftly and twenty firemen drawn from Eastern Hill, Cheltenham, Mentone, Brighton and Sandringham were quickly on the scene to smother the flames with four thousand gallons of foam. Fighting the blaze from all four sides the firemen had it under control within an hour. The Argus reported the brave action of ten gas employees who ignored the danger to remain in their posts maintaining gas supplies to the southern suburbs. They worked in the hot smoke filled No 1 retort house while the flames swept up the outside wall close to the master main carrying highly explosive purified gas to the two huge gasometers. There was also a report of power lines falling on a truck which an employee drove to safety. He said later he didn’t have time to worry as the flames were all around him. He just hoped for the best, put his foot down and “let her go”. [4]

Two firemen and an employee of the Gas and Fuel Corporation suffered minor injuries from the boiling tar and hot ash but the damage to the works was relatively light. The incident did not interfere with the production or delivery of gas to company customers. While heat cracked the brick wall of the six storey building, blackened three walls and partly burnt through a roof, no real extensive damage was done. 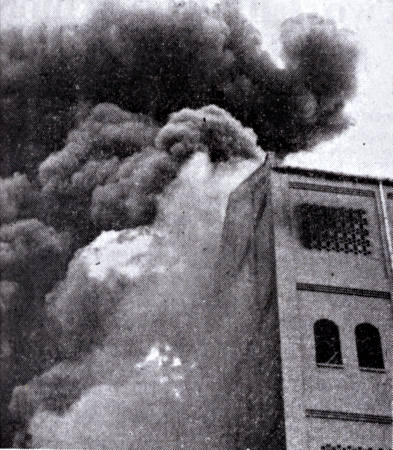