Wednesday July 30, 1890 was an important day for Cheltenham and the Shire of Moorabbin because the Governor, Lord Hopetoun, came by train to open a new wing of the Convalescent Home in Centre Dandenong Road. The governor, accompanied by his wife Lady Hopetoun, Captain Wallington and Lord Rosedale, was met at the station by Sir A Nicolson, the president of the home, W Lamb Smith, the Shire President, and other councillors. At the station there was erected an evergreen archway surmounted by the letters “V R” and at several places along the route which the vice regal party passed were displays of flags and bunting. Escorted by members of the Victorian Rangers under the command of Captain Rigg and Lieutenant McKnight, the official party travelled the three quarters of a mile to the home where they were met by over six hundred school children who sang the national anthem. The Moorabbin Board of Advice had declared a half holiday for the local schools to allow the children to attend. The Shire Council provided the refreshments for all those children attending. [1]

Originally the home provided accommodation for four men although very often ten or twelve recuperating patients were crowded into the building. However, with the erection of the new wing a dozen more individuals were able to be accommodated, an expansion achieved at a cost of £1000.

The home had been operating in Cheltenham about four years earlier in a cottage made available by the then Mrs Davies, the wife of Matthew Davies , the developer of Mentone, solicitor and member of the Legislative Assembly. [2] The ten-acre property, together with the services of a gardener, was made available for three years. When the three years came to an end the committee of the home appealed to the public and raised the £1000 needed to buy the property. After completing the sale Sir Matthew Davies returned the money to enable the committee to proceed with the building of an extension to the home. This action of Sir Matthew was described as “a noble gesture” in the local press. 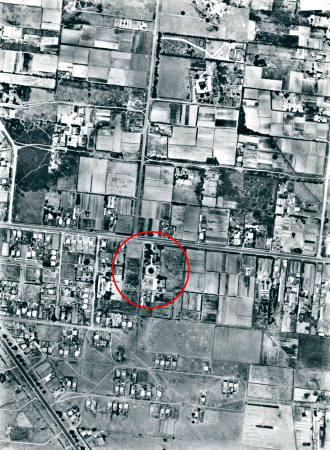 The home was originally established to care for homeless and friendless men who had been released from hospital before they had sufficiently regained their strength to survive without assistance. There were times when the hospitals were overcrowded and men were discharged a day or two too soon. But with a few extra days of care they rallied. There were also cases of men who had been discharged from hospital with incurable diseases being admitted to the home. Although unsuitable candidates for the home they remained at Cheltenham for a week or two before being forwarded to other institutions where doctors could supervise their care.

No distinction was made between the individuals entering the home because of social status. Residents included “the younger sons of the nobility” and “those darker skinned strangers to our shore”. At Cheltenham they stayed under the supervision of Mrs Assenden, the matron, for up to three weeks during which time they benefited from the fresh vegetables, fruit and milk produced on the property. When the time came for them to leave they left “hearty, quite ready for the renewal of the strife and battle of life,” according to the newspaper report.

In the same report the writer acknowledged that the Cheltenham residents may not have welcomed the establishment of such a facility in their town but expressed the view that they need not fear the future. Because of the success of the home, he suggested medical men would learn of the mild climate and healthy environment experienced by Cheltenham in its location near the sea yet sheltered from cold winds. As a consequence more people will arrive to enjoy these benefits.

The home continued to operate until after the Second World War when it became the RSL War Veterans Hostel. [3] Later, on March 2, 1962, the newly developed village of individual units operated by the RSL War Veterans’ Homes Trust of Victoria, was officially opened by Robert Menzies, the Prime Minister of Australia.[4] 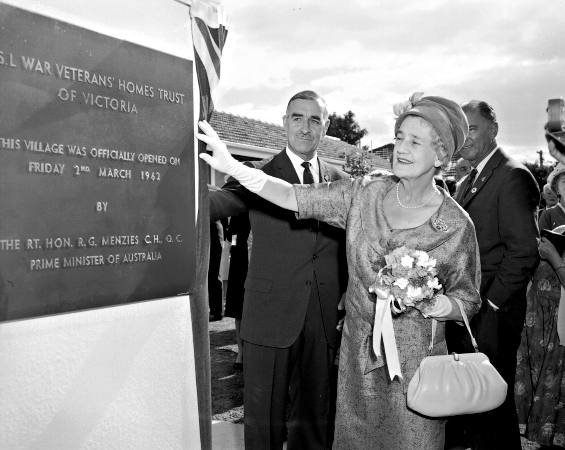 Dame Pattie Menzies examines the plaque noting the opening of the village by her husband, Robert Menzies, the Prime Minister of Australia. Courtesy Leader Collection.