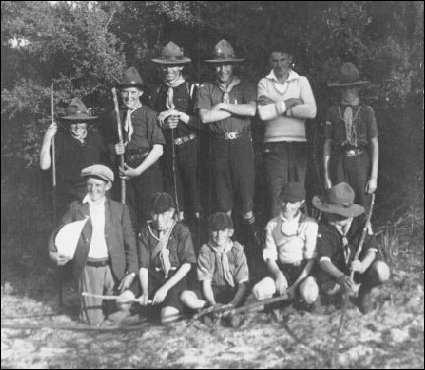 Tom Sheehy writing in 1977 on the beginning of scouting in the Moorabbin area used the heading , "The youth of the day were playing up." He went on to report, "Following the unveiling of a gaslight drinking fountain at the corner of Point Nepean and Chesterville Rds, Cheltenham, by Thomas Bent, the youths of the day were becoming a little troublesome by playing a game of tactics with the local policeman.

"Apparently they where ‘playing at soldiers’ in imitation of their returned Boer War soldier heroes and had chosen the local policeman as their enemy. "

"One section of their ‘push’ would decoy the constable to a sham disturbance in Charman Rd., while the rest proceeded on a rampage of painting everything they came across with whitewash. "

Local citizens were concerned about the influence of these pranks on younger boys still at school, and in 1907 a Boys’ Brigade was suggested as a means of turning the boys’ energies to better advantage. "A number of drum and fife bands were formed in response to the problem and some local headmasters stepped up their efforts not to ‘spare the rod’." (Sheehy 1977)

It was during this period in time that the hero of the siege of Mafeking in South Africa, Major-General, Robert Stephenson Smyth Baden-Powell started up the Scout movement in England.

He held the first Scout camp at Brownsea Island in Poole Harbour in August 1907 at which twenty boys attended. This camp was such a great success that it heralded the beginning of the greatest youth movement the world has ever seen. Not too long after this Scouting reached Melbourne. 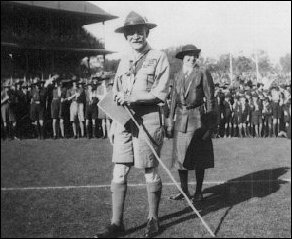 Lord and Lady Baden Powell at the Melbourne Cricket Ground, 1923.

There has always been much controversy about who was the first to form a scout troop in Melbourne but Kingston doesn’t claim that honour. However we do know that Scouting did come to the area that we now call Kingston somewhere between 1908 and 1910.

At the time the local Shire Councillors of Moorabbin saw the Boy Scout Movement as the answer to their youth problem and it was also a great opportunity to introduce something to the local lads that would be both instructional and informative, and useful to them in the years to come.

One of the first known Scout groups south of Brighton was the, Cheltenham Troop of Boy Scouts (who were later to become known as 1st Cheltenham). Everest Le Page the son of Cr Francis Thomas Le Page was persuaded to form a Boy Scout Troop at Cheltenham. At the time he had the blessing of the Shire Councillors as they saw it as a way of confronting a local problem that would keep the local larrikins occupied and off the streets. Even today our aim in Scouting remains the same and that is to keep our youth involved and happy.

There are conflicting reports of the actual date that the Cheltenham Troop of Boy Scout’s began. The Le Page family history notes that Everest Le Page commenced the Scout troop in late 1908 but a document in the Scouting archives suggests the troop started early in 1910.

Shortly before establishing the Cheltenham Troop Everest Le Page joined the Victorian Rangers, a militia group with a company headquarters in Cheltenham. In that organisation Everest gained the rank of Lieutenant and served as Quartermaster. No doubt some of the skills he learned there were employed in leading the Scout troop consisting of boys ranging in age from 11 to 18 years. Initially they met in a disused coach and stable shed at the rear of the St Matthew’s Church of England in Cheltenham before moving to the Mechanic’s Institute and Temperance Hall, located near the corner of Point Nepean and Charman Roads, Cheltenham. There was also a brief period when the troop met in Wilson Street. From all accounts the youth of the Cheltenham area took their scouting very seriously and they enjoyed every minute of it. By 1924 the group had grown in size to four patrols and a Cub pack was introduced three years later.

During those early days most Scout Troops met under the banner of the "Australian Imperial Boy Scouts" and from 1909 till 1914, there were twenty recognised Scouting districts in Melbourne. Cheltenham would most likely have been a part of District No 20, which covered all the Scouting groups from Ormond to Frankston. Unfortunately few records exist about the Australian Imperial Boy Scout Movement during those early days and as a result it very hard to validate many of the stories that have been handed down by people over the years. But there are some things we do know.

"On May 2, 1915, not long after the Mordialloc troop was formed, we saw another Scout Troop spring up at Chelsea under the leadership of Herbert Royle and Louis James Brethern. At that time the boys in the troop were William Beament, Julius Mayer, Leonard Downes, Walter Glover, Charles Saunders, William Stevens, Roy Grumill, Reg Waddle, Harry Hart, Edward Keaney, George Coates, Neil Saunders, Edward Glover and Maurie McDonough. ..."

Due to the outbreak of the First World War in 1914 attendances dwindled and the younger scouts at times travelled to other places where Scout meetings were being held. It was during the 1914/18 war period that the volunteer efforts of the Scouts from these groups became more appreciated by the community and the councillors where quick to acknowledge the sterling service that was being rendered by such capable and enthusiastic youthful members of the Scouting movement. 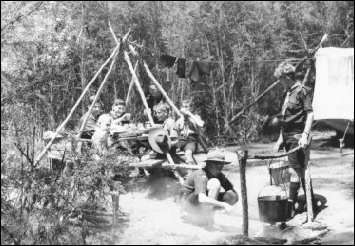 Little did people, such as Everest Le Page and others, realise that when they helped to bring Scouting into this area that they were introducing a youth organisation that in years to come would play a major and significant role in the development and training of thousands of boys and girls.

These three groups were only the beginning of a movement that was to become entrenched in Moorabbin, Mordialloc and Chelsea over the next eighty years and which is still functioning today in the City of Kingston under the banner of the "City of Kingston District".