For decades property owners and residents of Beaumaris argued and petitioned the State government for a railway connection to the Melbourne rail system. Henry James a large owner of virgin land in Beaumaris in the 1880s attempted without success to have the line from Sandringham extended to Beaumaris. Instead he had to content himself with a horse-drawn tram that journeyed from Sandringham to Cheltenham. Even this was not achieved without long drawn out discussions with the Moorabbin Shire Council. [1] In 1906 a petition was drawn up for presentation to the Premier in an effort to gain and extension of the railway from Sandringham to Beaumaris. [2] Later there was an electric tram from Sandringham to Beaumaris but this too was eventually abandoned as it was economically unviable. In the 1950s the goal of a spur line to Beaumaris seemed likely to become a reality with a plan for a link from Moorabbin. But hopes were dashed when this failed to eventuate.

In 1954 a planning report from the Metropolitan Board of Works noted that the high cost of building railway lines precluded the extensions of the existing suburban railway system. Therefore where citizens lived beyond walking distance of the railway network the expectation was that they would be served by feeder bus services. However, the report acknowledged that there were some instances where feeder services were not adequate to move the number of people requiring transport. In such cases, identified by the Railway Construction Branch in consultation with planning staff, the need for a railway extension was acknowledged. Such an exception was seen to be Beaumaris. 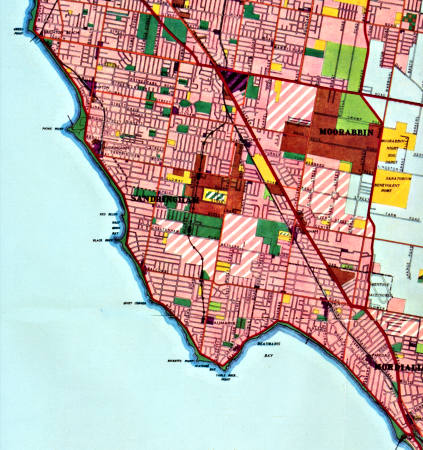 The Melbourne Metropolitan Board of Works in a presentation to the State Development Committee suggested that the best solution to the Beaumaris situation was a railway extension from the Melbourne-Frankston line from a spot between Moorabbin and Highett. The committee in its report of September 16, 1952 adopted this recommendation and the required land was reserved. [3]

The route of the planned extension commenced near the Dane Road Reserve passing through a residential area to cross Wickham Road before traversing across another residential area to reach Highett Road. From Highett Road the line proceeded in a southerly direction through what was noted as undeveloped industrial land, passing the rear of the Cheltenham Memorial Park to cut through the Sandringham Golf Club before swinging across the Royal Melbourne Golf Club to arrive opposite the Concourse at Beaumaris.

While many people welcomed the decision of the Development Committee there were people who opposed it. The MMBW advised that 17 properties had been purchased costing about £18,000 and that 42 homes would have to be demolished. [4] The claim was made that properties along the route were suffering value depreciation and those owners wanting to sell could not do so without considerable loss. The fact that their properties were virtually frozen destroyed their incentive to improve them so values continued to depreciate because of the existing embargo. [5] Cr Basterfield of Moorabbin council agreed it was a good scheme when there were open spaces but the project had been left too late. Too many houses had to be destroyed. [6] 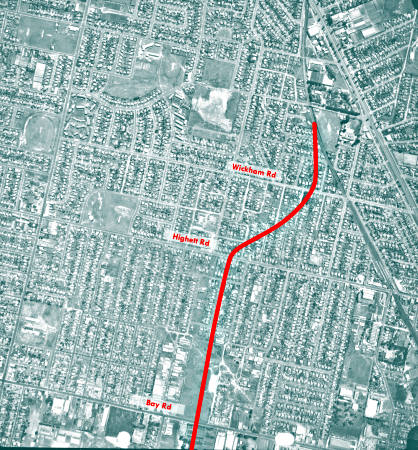 Aerial view of some of houses that would have to be destroyed to make way for the railway line, 1956.

The Beaumaris Parents’ and Citizens Association strongly supported the proposal and had gained the signatures on a petition of many residents to strengthen their position. They saw the railway as the best means of speedy transit to and from the City for an area that was rapidly developing with houses and industry. Most people indicated their preference for the cheaper and quicker train service to the city rather than depending on the bus plus train service that often failed to connect. It was pointed out that the train from Mentone to the City took 35 minutes at a return fare costing four shillings and seven pence while the duration of the bus plus train journey was nearly 50 minutes at a cost of seven shillings.

In April 1959 the Minister of Transport, Sir Arthur Warner said that the line would be built in about eight years time but by 1960 the idea of building the line had been scrapped and it was proposed that the land previously reserved would be released. This raised a storm. The Beaumaris Parents’ and Citizens’ Association reminded people that if the line was deleted from the plan and the land freed for other uses then in the future they would be unable to retrieve the situation without huge resumption cost

In April 1961, Murray Porter, the Minister of Local Government, advised the Board of Works that he considered the reservation of property for a railway between Moorabbin and Beaumaris no longer required and requested the Board to prepare an alternative plan. Subsequently the railway reservation was deleted from the amended planning scheme in preparation at that time. The notion of a railway line to Beaumaris remained an unattainable dream. [7]