School had finished for the year. It was 1950 and at sixteen I had my first job. For two weeks I was to be a mail sorter at the local post office for the pre-Christmas rush.

My first experience was an introduction to the back room behind the wide wooden counter where the postmaster and his assistants served the general public. Posties worked here, packing their bags and preparing for delivery. The postmen loaded those bags on to red bicycles for their rounds twice daily. In a small corner section there was a table with upright pigeonholes attached and it was here that I joined another junior for the daily sorting of the mail which kept piling up on the table. 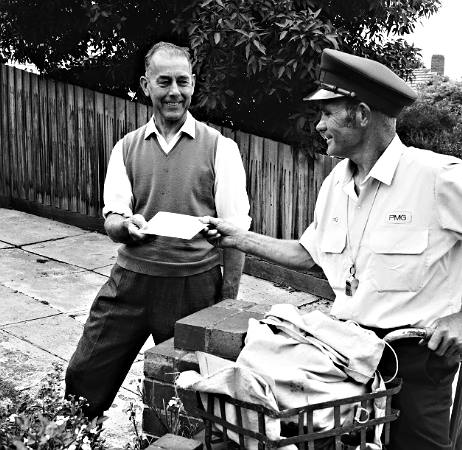 Each pigeonhole had an identification code such as S12, N10 or SE9 on it. These were the Melbourne postal districts but other codes also indicated country, interstate and overseas destinations for the letters that we inserted. Soon I knew the codes with the suburbs and towns they represented without even looking at the master sheet, so the job became enjoyable and stress free. There was good-natured ribbing from old hands among the posties who relieved their boredom by taking the mickey out of new workers, that is when they were not telling each other off-colour jokes. All this was amusing and things were great for a couple of days until the postmaster came in on my third morning and announced that I was to ‘clear the boxes’.

What the boss meant was that I had to go around the Mentone district and open all the red mail post boxes so that letters could be brought in and sorted. In normal times the permanent junior boy rode a bike around and collected the mail which he carried back inside a large canvas bag perched in the bicycle’s metal carrier. But as the Christmas rush developed the weight of the letters increased to the point where another method was needed. I was told that a taxi would pick me up that morning so that I could be driven to the fifteen mailboxes that had to be cleared. Just after the war, with shortages of everything, Mentone post office had no vehicle so the local hire car firm, Mentone Taxis, was pressed into service for His Majesty’s Mail.

Just before 11 a.m. the cab arrived and I was soon in the back with my canvas bag, a bunch of keys and a feeling of trepidation. Soon this grew to downright alarm as Tom, the beefy taxi driver, began to play his role. He hardly said a thing apart from a sullen grunted remark as he drove to the first box on the extremity of the Mentone postal area, at the end of Sixth Street in Parkdale, where my troubles began in earnest. My bunch of fifteen keys was the problem. I could not find the right key to the first mailbox and as I wildly tried each one the torrent of abuse from Tom grew more insulting and bad-tempered.

‘What the bloody hell are you doing? We’ll be here all bloody day. I’m missing fares while we do this bastard of a job. Hurry up, will you!’ was the message from inside the cab while I grew increasingly desperate until at last a key opened the box. Back in the cab the language became worse as we sped to the next red pillarbox. A similar scene developed.

‘Look, hurry up son. I want to get back for lunch, not bloody supper. For Christ’s sake don’t they teach you anything before they send you out. How much longer will we wait?’ Tom was red-faced and when I got back in the car he took off at a furious speed as I rolled about in the back seat, fearful for my life.

So it went on. I fumbled for keys at each mailbox, Tom swore furiously, the mailbag grew in size, and after what seemed like an eternity we began our return journey. As we drove along Balcombe Road towards the main street the railway gates closed, blocking the way to the post office. Tom went into a rage.

‘If I’ve gone through these f---- gates four times today the f----- things have been closed every f---- time. How many more f---- trains can there be?’ He repeated this over and again until the gates finally opened and allowed me to reach the sanctuary of the post office. I disgorged the letters from the bag on to the sorting table and related my tale of the trip to my co-worker who laughed loudly, having had some experience of the taxi round.

After a couple of days the keys became familiar, the boxes opened more quickly, and Tom’s temper cooled a little as we did the round in less time. Tom remained convinced that the railways singled his taxi out for unfair treatment every time the railway gates shut in his path, so he let fly with unprintable language each time. But I grew to like him as the days went on, realising he just loved to swear and let off steam, appearing to enjoy the feeling that the odds were stacked against him but he was up to the task. The mail job annoyed him and he tried to fly through it in the shortest time he could. This impatience was to bring on a Mentone mail disaster.

At the time many local streets were unmade and the worst was Queen Street which was a rough track full of deep holes that filled with water after rain and remained serious obstacles even in dry weather. There was a red post box in Queen Street near the intersection with Second Street, another rough track left over from the horse and cart days. Tom refused to drive down either street to reach that box.
‘I’d break every bloody spring in the cab if I went down there’, was his advice to me. ‘Don’t worry son. The truck goes around at night for the 8 p.m. clearance. Let them clear the bloody thing.’

At the time the truck from some central office did the rounds in the evening after the local post offices had closed. The second daily mail pick-up went straight to Melbourne central sorting office. Or so I thought at the time. Each day Tom refused to clear Queen Street and referred grumpily to the rough track and the ‘night boys’ who ‘could have that job on their own’.

My drives with Tom went on and I actually became friendly with him as the job became easier. He chatted away in his cynical way, distrustful of nearly everyone, especially the signal box operator at Mentone Station who kept closing the railway gates when his taxi came into view. Two days before Christmas he announced that the cab would not be doing any more rounds and I said my goodbye to him. The volume of mail had lessened and I was told to take the bike out on Christmas Eve to clear the boxes the slow way. Most of the Christmas mail had been sent earlier, so the small numbers of cards and letters that I picked up were those from desperate last minute writers, or people who had forgotten some friend. I reached the middle of the round where Queen Street was located. By riding down the footpath I could avoid the worst of the potholes. I decided to clear the box. There would not be much left for the ‘night boys’ this Christmas Eve.

I reached the red metal box sitting on its solid pole. The key that I had shunned for two weeks went into the lock and the door sprung open as mail fell out on to the footpath underneath. The thing was jammed full of letters. Many were stuck up in thick wads at the top near the posting slot and others packed tightly at the bottom of the box. It was difficult to see how people had posted their letters against the mass of mail inside. The truth dawned on me. The thing had not been cleared for at least two weeks during the height of the Christmas rush. The ‘night boys’ had been by passing Queen Street’s bumpy surface as well! A pang of guilt came over me, especially when I saw Christmas cards addressed to interstate places and at least one to someone in United Kingdom. As I packed all these letters into my bag I was glad there were no people passing the spot or out in their gardens nearby. How would I have explained the mass of letters with Christmas only a few hours off?

Back at the post office I spread the letters around the table as thinly as possible and quickly sorted them. The postmaster often came in to check the sorting procedure and he had recently commented on the fall in mail volumes close to Christmas Eve. When he did come in his eyebrows rose a little at the larger size of the sorted parcels, but he shrugged his shoulders and went back to the front counter. I breathed a sigh of relief.

That evening I collected two five-pound notes for my first-ever fortnight of employment and went home to enjoy Christmas. During the next few days I tried to imagine the consequences of the mail box disaster. I wondered what resulted from the disappointments when many dozens of cards did not reach their intended destinations that Christmas. Over half a century later I occasionally still wonder.