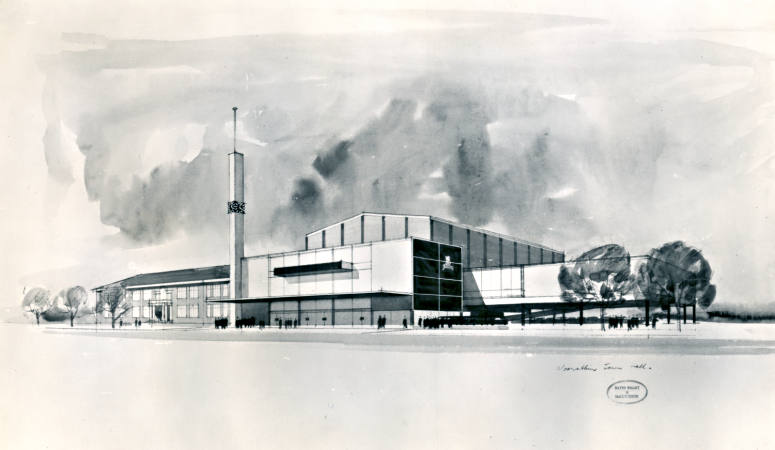 The City of Moorabbin had a hall that was built in the time of Tommy Bent but in 1955 the councillors believed it was time to construct a town hall more fitting with the size and prosperity of the district. [1] Where should it be built? What should its features be and how should it be financed, were questions that had to be answered.

Despite the view of disgruntled ratepayers that the council’s priorities in the areas of replacing impassable roads and non existent footpaths with sealed surfaces, the mayor, Cr Keith Putt, expressed the opinion that the time had arrived when the council should address the issue of building an appropriate town hall. While councillors shared his view there was no consensus of where this town hall should be built. [2] 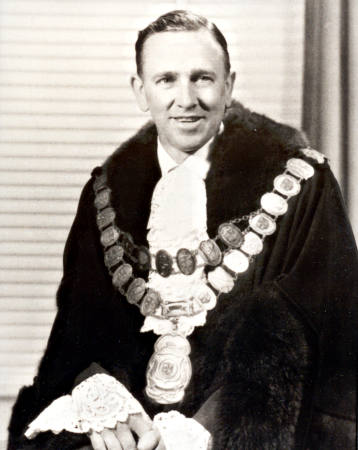 Two sites were being considered. One was to erect the town hall on the existing site of council offices and another was on the Felton Grimwade site of 13 acres, half a mile from the Moorabbin railway station . The Felton Grimwade site had the advantage of space, thus providing for future expansion with the possibility of building a court house, library and municipal offices there. The size of the site also gave great scope for attractive landscaping with parks and gardens. While the ‘isolation’ from rail transport was seen as a disadvantage it was argued that sixty per cent of residents paid their rates by cheque rather than over the counter while the prevalence of cars in families had increased and was likely to increase further thus mitigating the notion of isolation. A further factor in its favour was the cost of acquiring the land and the attractive terms available to the purchaser. The cost of the Felton Grimwade site was £54,000 with payments stretched over a period of time. In contrast the idea of using the existing council offices site involved obtaining adjacent land and property which would require an immediate cash payment for an area of no more than two acres. [3]

The existing Council Offices’ site was thought to be inadequate by architects and planners. This was the case, in their view, even if the Council obtained all the land, shops and businesses in the triangle of land bounded by Nepean Highway , South Road and the railway line. Should this be the council’s desired option then the architects recommended that all existing buildings be demolished to allow a fresh start as they said, “You cannot make a silk purse out of a sow’s ear.” [4]

Some councillors were concerned about how the Town Hall project was to be financed and as a result action was delayed. It was not until 1959 when the issue re-emerged with the Council’s architects submitting a plan. The plan made provision for a main hall to accommodate 1000 people together with 1000 in the supper room and 750 individuals in a smaller second hall. The estimated cost was given as £250,000.

Cr K Farrall presented a revised plan for the town hall, designed by Mr P.Gray, the council’s deputy building surveyor, which made provision for a main hall, supper room, each to accommodate 1250 people, along with rooms to hold small functions which were not included in the original architects’ plan. An important favourable factor in the eyes of some councillors for the Gray plan was that its cost was expected to be £70,000 less than the option provided by council’s architects. [5]

At a following council meeting Cr Farrall submitted a preliminary plan drawn up by Mr Gray which he believed was within the financial means of the council. The plan provided for accommodation for 1100 people together with all ancillary services at a cost of £100,000. Cr Farrall received the support of his colleagues in directing the council architects to proceed with drawings on the lines set out in the Gray plan. The outcome was expected to be a fine town hall worthy of the municipality without imposing hardship on the ratepayers. [6]

Nevertheless, finance still remained a concern for some councillors so they welcomed Cr Hodgson’s indication that he had a proposal that would limit the pain. Cr Hodgson, as chairman of the administration committee, reported that several options had been investigated by the committee and after much discussion decided to recommend that the necessary funds be obtained by selling redundant council land to realise an estimated £45,000. [7] This together with £25,000 from loan funds plus £5000 placed on the estimates each year until 1965/66 would cover the cost of the building. Cr Coates rejected this proposal. He contended that projects of this nature should be a charge on ‘posterity’ with the money being obtained from a special loan allocation rather than the sale of surplus council land. The properties marked for sale were situated in Barker Street, Cheltenham, Railway Crescent, Moorabbin, Williams Street, Moorabbin, Garfield Street Cheltenham, Centre Road, Bentleigh, and Sandford Street, Highett. [8]

Ten months after the discussion of the Hodgson proposal regarding finance, the council decided to proceed with the erection of a town hall at a cost of £240,000. This figure was struck prior to the costs of preparing the site were added. Before the building could commence a branch library had to be removed, two dwellings re-sited and the existing town hall demolished. When the cost of furnishing was added the total cost of the new town hall was expected to be just short of £300,000, a figure substantially more than that originally discussed. [9]

Because of ratepayers’ concerns about the cost of the building and the impact on the road making programme the town clerk, V A Smith, issued a statement to the press. While stressing the need for a town hall worthy to cater for the needs of an ever-increasing population he pointed out that the council was not in a position to utilize additional funds in private street construction as the council design staff and engineers were working to their full capacity and that the larger contracting firms were unwilling to undertake the work. Smith also reminded residents that 1962 was Moorabbin’s centenary year so the building of a town hall was a suitable project to mark the important occasion while spelling out the sources of the money needed to finance the construction. [10] 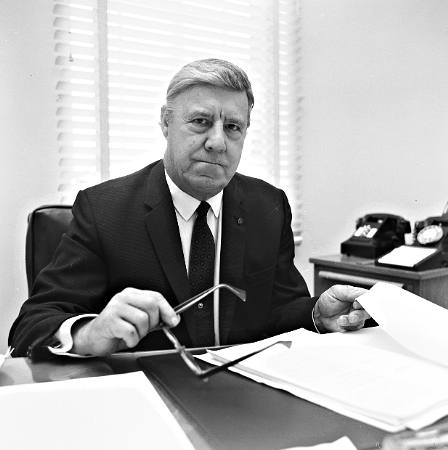 By March of 1961 the town hall plans were again in the ‘melting pot’ as advocates amongst the councillors were wavering in their support for the project. The lowest tender received for the construction of the building was £50,000 above the estimated cost. To raise the additional money required was difficult as the general community was experiencing a credit squeeze from financial institutions. Cr Le Page thought the difference between estimated cost and tender was too great. On the other hand Cr Butler said the youth of the community should not be ignored and he saw the prime purpose of the town hall was to provide facilities for wholesome entertainment of young people. He reminded his colleagues that the building of the town hall would in no way affect the construction of private streets. [11] 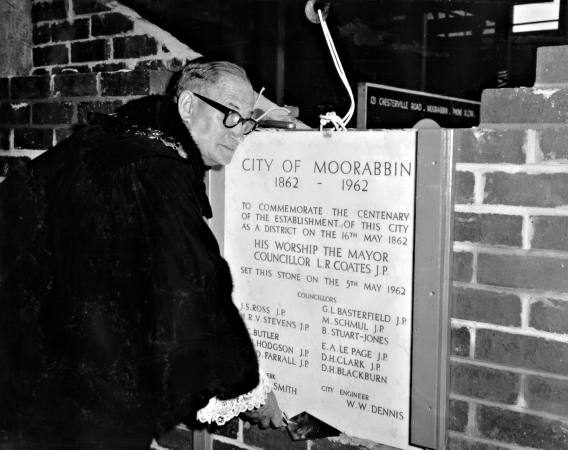 The new hall described by the architects, Bates, Smart and McCutcheon as dignified and flexible was officially opened by the mayor, Cr Ken Hodgson on May 29, 1963 with a packed audience in the main hall and in the presence of distinguished guests. Mr C D Mason, the builder, was there accompanied by his wife. Although the new hall was not finished in the centenary year councillors and citizens welcomed its completion. A fine lavish civic ball where 700 participants enjoyed the “soft lights and sweet music” was a major function to celebrate the historic occasion. [13]