The Great Depression hit hard in the early thirties as unemployment soared and businesses struggled to survive, but the economic slump did not deter one group of enthusiasts in Mentone. During the last few months of 1930 a group of Mentone Tennis Club members planned a large tennis tournament that eventually took place on the oval at Mentone Recreation Reserve. 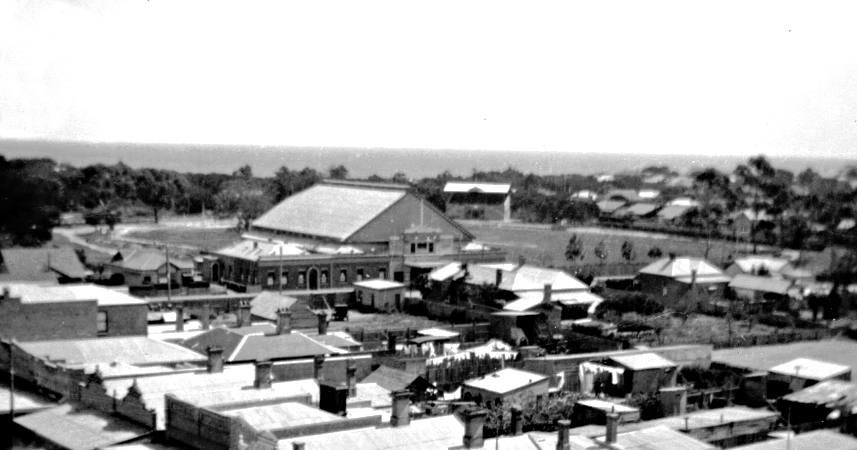 Mr A. Petering, the honorary secretary of the club, suggested the event during the year and his president, E.C. Norman, supported him wholeheartedly by taking the chairman’s role on the organising committee. Several meetings set the scheme in motion so that by December the group was ready to put the grand plan into practical action. The event took place over three days starting on January 1st 1931. Before that the committee of volunteers worked on Mentone Oval with mowers and rollers as they tried to achieve the smoothest grass cover for tennis to be played. They also erected cyclone wire fences between courts and around the boundaries, as well as installing posts for each net. Finally, lines were marked on the carefully measured courts. Initially, the club planned for six courts but as entries grew in numbers they added another four, making the tasks of mowing and rolling even more burdensome. Eventually, three quarters of the oval ended up as tennis courts.

The press reported that the weather, though threatening, did allow tennis to be enjoyed through the days of the event. The courts, according to the reporter, were good considering the short preparation time available, but towards the end it was noted that some serves became unplayable due to the speed of the surface. This was probably a polite way of saying they were rough! Credit is given to a committee of helpers that included A. Yorston (Treasurer), Roy Pleasants, Doug Price, Harry Mansour, Morris Caudwell and A. Neal. Councillor H. Edwards added his support.

How on earth did they get the oval cropped for tennis from its 1928 state in a couple of years!!! Courtesy Mentone Cricket Club.

The club attracted 250 entries to this event so that men’s and women’s singles and doubles competitions could be provided. There were mixed doubles, as well as handicap events where better players had to concede initial points to opponents.
In the men’s singles V. Worrall def. R. Clark, 4-6, 6-5, 6-4, while Miss Hartnett beat Miss Galbally, 6-2, 6-1, in the women’s event.

It was agreed that the tournament had been a great success and the Mordialloc News report went even further by commenting that the spectacle of young people playing with such energy was a sight to gladden the heart of anyone who takes the slightest interest in the future of this richly endowed land of the Southern Cross and an answer to the croaking pessimists who doubt her future prosperity. The Great Depression brought diverse reactions.

Mentone’s tennis tournament was held again in January 1932. The oval had never looked better, according to the local press, and 280 entrants necessitated 15 courts to be laid out, covering the entire reserve. The weather was fine over the New Year period but the large number of players could not all complete their assigned matches in the two days allotted (Friday Jan 1st and Saturday January 2nd), so the finals were held on the following Saturday. At that time no organised sport was allowed on Sundays. Even with the extension of time the final of one event had to be shortened to one eight-game set. The club expended 120 pounds ($240) on trophies, balls, top-dressing and wages in order to run the tournament in 1932. It made 18 pounds profit. There were 34 dozen balls used in the three days. The committee members that had run the 1931 event continued their work for the second tournament with the addition of E. Griffiths, S. Parkes and D. Condon.

The courts played well according to the report, but it also noted that local interest in the event could have been higher. This seems to suggest that the attendance was not as big as in the previous year, possibly because the finals were played a week after the early rounds and many people would not have returned once their favourites had been eliminated.

One player of later fame took part that January. Miss Nancye Wynne, who lived in Plummer Road, Mentone, teamed with V. Worrall to win the mixed doubles championship, 6-5, 5-6, 6-0, and later played with Morris Caudwell for a straight sets win in the mixed doubles for novices. Nancye Wynne was just 14 years of age at that time and in 1937 she won the Australian Ladies’ Singles title. Eventually she won six national singles championships and a dozen Australian doubles titles in which she partnered both Colin Long and his sister-in-law, Thelma. In these later events she played as Nancye Bolton, her married name. 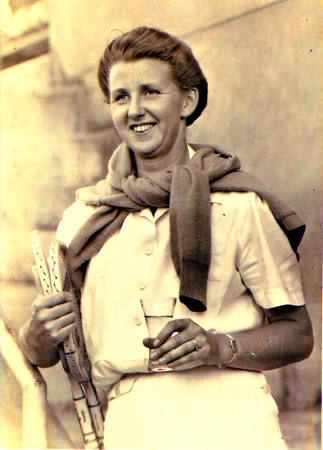 Nancye Wynne (Bolton) played in the tournament as a fourteen or fifteen year old and later in the decade became the Australian Women’s Champion. Courtesy Pam Stockley.

At Mentone in 1931-2 many of the large group of entrants came from other parts of Melbourne and Victoria but there were plenty of local names in the results. Mrs Prince, Miss E. Ryan, Miss J. Clements, Miss Mansour and E. Tonkin were known in other roles around Mentone at this time. The tennis of those two New Year periods provided a boost to spirits that were undoubtedly dampened by the economic slump of the time. But the enthusiasm did not continue. Mentone Oval did not host any more of these tennis events. Despite its reported success in handling the two large tournaments, Mentone Tennis Club stuck to pennant games at its courts behind the bowling club in Swanston Street after this time.