Don’t Cut Down those Trees 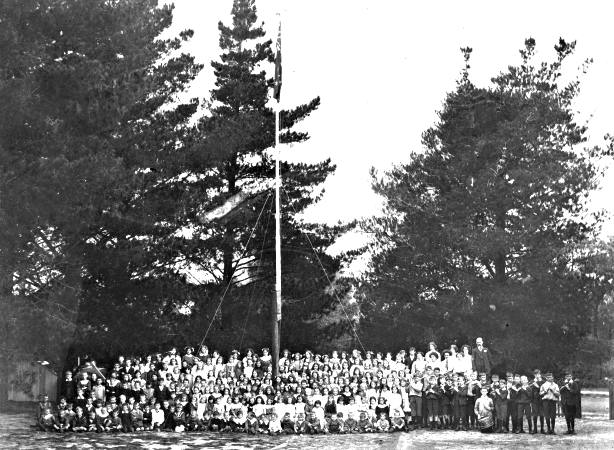 When in 1931 it was learned that the Public Works Department proposed cutting down the pine trees surrounding Cheltenham State School a protest meeting was quickly organised for residents to express their views. The local member of parliament, H M Cremean, MLA, forwarded a letter he received from the Education Department to E A Le Page, the chairman of the school committee. The letter informed its recipients that the Minister had approved the cutting down of the trees at Cheltenham State School by the Public Works Department as soon as they were able.

On receiving this information members of the school committee and the mothers’ club, with the exception of one or two dissenting individuals, unanimously agreed to protest to the Department about the proposed action. It was also agreed to call a public meeting to be held in the Mechanics’ Hall at Cheltenham to give parents an opportunity to express their opinions.

This was not the first time that the Department had decided to remove the pine trees. About nine months earlier, tenders were called to remove the trees because of the problem caused by the pine needles. On that occasion through the intervention of Mr Cremean the Department was convinced not to proceed. A Public Works inspector had visited the school and reported that the pine trees around the school were becoming a nuisance owing to the needles falling into the roof gutters. To remedy the situation the answer was seen to be the removal of the trees. The school committee at that time suggested the offending branches be lopped or covers be made to protect the guttering. Because of the strength of the protests the Minister decided not to proceed.

A second inspection was undertaken at the beginning of 1931 and problems with the pine trees were once again documented. Not only was the nuisance of falling pine needles in the guttering noted but attention was also drawn to the eruptive nature of the trees’ root system and the danger it posed to the foundations of the school. Consequently, it was decided definitely that the trees must go. Mr Cremean was informed by the Department that this decision was made because of his representation on the issue, a statement which he said was untrue. He immediately approached the secretary of the Education Department, Mr Bottoms, asking that the action of the Public Works Department be delayed as he was sure there would be a strong local protest. 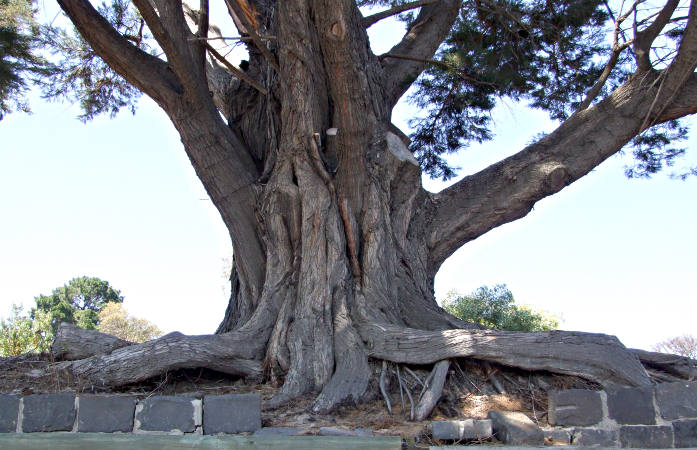 The invasive nature of the roots of the pine tree. Photograph Joe Astbury 2006.

The situation was reported by Mr Cremean to the public meeting held in the Mechanics’ Hall. He advised that the meeting could either endorse the action of the Department and let the work proceed, or make a determined protest making clear to the Department that the trees should stay, “if at all possible.”

Several speakers presented their opinions. Mr Cremean felt the difficulties could be overcome by lopping branches and covering gutters, and by trenching and cutting offending roots. He believed it would be bad for the school to lose its shelter as they were not only ornamental but also had a utility value. Mr Le Page stressed that the trees provided the main shelter for the children, and almost all the school committee were against their removal, as were the mothers’ club. He also had a letter from the school head teacher, Mr Philips, stating that the staff would be sorry to lose the trees.

When asked whether the Department proposed giving the school anything in place of the trees Mr Cremean explained that the money was coming from the Unemployed Relief Board made available for small works at schools. He was unaware of any intention of the Department to provide extra shelter sheds if the trees were removed. The president of the mothers’ club, Mrs Hanish, said the trees were necessary as nearly 600 children attended the school and they must have shelter. Other parents added their voices to the protest. Mr Hargraves said he was concerned about the toddlers. The older children he noticed ran across the road and sheltered under the shop verandas during lunch time but this was not an option for younger pupils. He believed the Department was not consistent as it was encouraging other schools to plant trees. Mrs McFarlane made a spirited appeal for the retention of the trees from an aesthetic viewpoint. They helped to separate the school from the cemetery that was next door. She saw the proposal as wanton destruction.

Mr G Brownfield, as chairman of the cemetery trust, spoke in favour of removing the pine trees. While he acknowledged the trees provided some benefit in summer time he questioned their usefulness in the winter months. He also drew attention to the destructive nature of the roots of the trees. It was a serious matter, he claimed, if the foundations of the school were being undermined. Yet Mrs G Andrew, secretary of the mothers’ club, was confident that the roots were unlikely to interfere with the school foundations

Mr S Butler moved that a strong protest be entered, through Mr Cremean, against the actions of the Public Works Department in their proposal to cut down the pine trees at the Cheltenham State School. The motion was seconded and carried unanimously. Mr E Le Page and Mrs G Andrew were appointed to accompany Mr Cremean when he made the presentation to the Minister.

The deputation arguing the case for retention to the Minister was obviously successful as the trees continued to provide shelter to numerous pupils for as least another thirty years. Their demise was primarily brought about by the need to locate new buildings to cater for the growing school population and the need to avoid the danger of falling limbs, although pine needles in guttering remained an ongoing problem during the life of the trees. 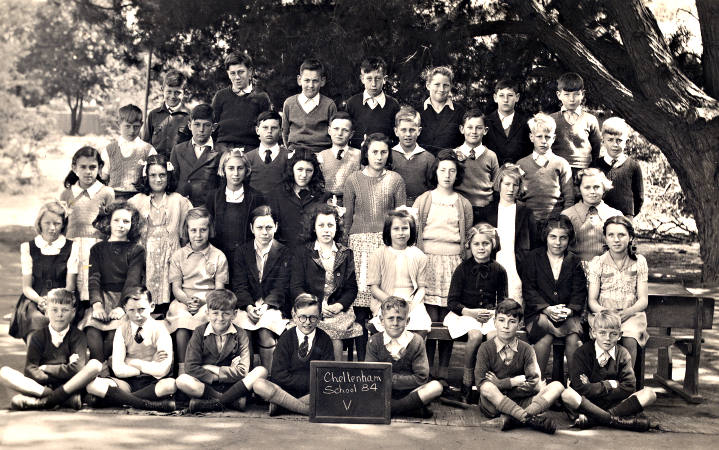 Not only did the trees provide shelter during the day but it was under these trees that class photographs were taken over the years. Grade V in 1945 and the pines remain standing.